A Foodie Meetup (Tweetup?) in Rome 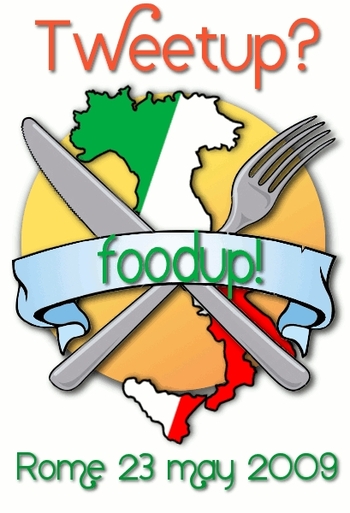 It’s hard to be an Italophile and not also be a foodie. This country is one of the food destinations, so it’s not surprising that the words “Made in Italy” on a label can help sell a food product. (It helps with shoes and purses, too, but that’s another story.) But although many of us would like to think that Italy is free from the scourge of processed foods and the golden arches, the truth is quite different. Yes, there is plenty of amazing cooking going on in this country (and I do think more Italians still eat what I’d consider fresh, regional, and seasonal items than most of the folks back in the U.S.), but the grocery shelves also have Kraft singles, tasteless white bread, frozen veggies, pre-bagged salads, and mass-produced ice creams.
Which is why simply seeing “Made in Italy” isn’t enough to tell you that the food you’re about to buy is worth what you’re paying for it.
One of the things that initially spurred me to make the trip to Italy this month was an event in Rome over the weekend that was designed to introduce a few of the Italophile foodies who had gotten to know one another on Twitter to some lesser-known but award-winning Italian food products.
The “foodup,” as it was being called (a foodie “Tweetup,” I suppose), was hosted by Kelly and Austin of Travellious in the Rome apartment they’d rented – and the foods were prepared and described to us by Francesco and Fabiola of Sapore Vero. It was not only great fun to meet up with all of these people I’d only interacted with online before, but also to be introduced to some wines and foods I hadn’t heard of or tried.
Fabiola took a bit of video while Francesco was welcoming us and introducing the antipasti and the purpose of the evening, which you can see here:

Francesco and Fabiola are in the midst of setting up an online company where people will be able to purchase Italian foods made often by small producers in the best possible ways and using the best possible ingredients. They’re passionate about making sure people think of only the best-tasting foods when they hear “Made in Italy,” and my guess is that they’d be horrified to see what passes for Italian food at an Olive Garden restaurant.
At any rate, their company – Sapore Vero – is still a couple of months away from being up and running, but you can get a glimpse of the kinds of things you’ll be able to buy eventually by checking out their website’s front page now. Be sure to bookmark it and come back when it’s open for business – and tell them I sent you!
Huge thanks to Kelly & Austin for hosting such a warm gathering, to Francesco, Fabiola & Valentina for serving up such delicious food and great explanations, and to all the Italophiles present. And please forgive me for not taking a single solitary photograph the entire evening – I was so caught up in the food and the conversation that I totally forgot about it. Austin wasn’t as ditzy as me, so here are some photos from the evening you can enjoy.