Getting Outfitted (Italian Style) for the World Cup 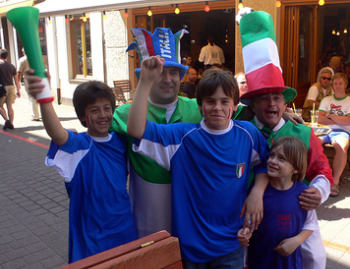 If you’ve been following along here at WhyGo Italy over the years, you’ll know that I was an Italophile who learned to love – and then went crazy over – the country’s “other” national religion, soccer. I’m not the world’s biggest sports fan, but when I get interested in watching a sport it’s usually because I’ve got a team or a person to root for. Sports are way more interesting, as far as I’m concerned, if you’ve got someone to cheer for. Otherwise, I can think of a bunch of other things I’d rather be watching or doing.
My footy-loving colleagues like to give me all kinds of grief for being a fan of the Italian national soccer team. The Azzurri have a bit of a bad reputation for diving a little too much and being somewhat dramatic (seriously, they can’t help it – they’re Italian, for pete’s sake), but I really did start cheering for them long before I knew much about the sport itself (let alone the Azzurri history).
Two of my coworkers are heading to South Africa for this year’s World Cup, of which I’m envious, but I’ll be watching as many games as I can on TV. I toyed with the idea of trying to figure out my own trip to see the tournament, but even by last summer I think I’d already given up hope of finding any cheap flights to South Africa. Yes, I know where it is in the world, but until you start looking at airfare you kind of forget just how far away it is (at least I did). When I heard the long route my coworkers are taking to get there, I almost got over my envy… Almost.
Now, although I’m not usually the kind of person to get or wear the jerseys of a team I like, I’ve slowly accumulated some paraphernalia for my favorite Italian soccer team. What I’m lacking, I realize as the World Cup looms, is anything Azzurri-related. Which is why I might have to give myself a little gift of an Italy World Cup 2010 jersey (my birthday is coming up, after all). I’ll just have to not wear it into the office lest I want to bring on more mocking…
Will you be traveling in Italy this June/July? If you will be, don’t miss the opportunity to cheer on the “home team” with the Italians – check the schedule for Italy’s games and find a bar with a TV so you can watch. It’s an experience you won’t forget – especially if Italy does well.
photo by il_gazza