Is a fake Venice as good as the real thing? 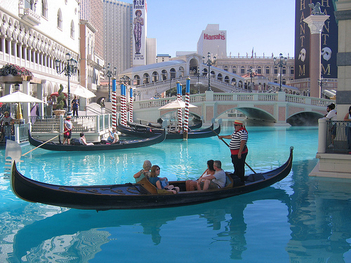 Regular readers of this site won’t need to be reminded how much I love Venice. I think it’s the ideal place to begin a vacation in Italy. After several visits, I finally got a handle on one of the things I find so alluring about Venice. I’ve told you about my recommendations for making your Venice trip a great one instead of stereotypically negative. And I’ve suggested my top 10 things to do in Venice.
So yes, I have an affinity for the canal city. It’s bad enough that I tend to get a little defensive when anyone says they don’t like it, or mocks it in any way. When I saw an article recently about the fake Venices of the world, however, I have to admit I got a good laugh out of it.
As you’re probably aware, there are several places around the world that call themselves “the Venice of ___” (fill in the blank). Why? It’s anyone’s guess, really. It could be they do it in order to lure people into thinking they can see the famous city without actually going to Italy. It’s possible that someone from Italy gave these places their nicknames after seeing a bit of water in the city center and likening it to the water city back home. Whatever the reason, there are so many cities in the world that compare themselves to Venice that it makes quite an amusing list – because while some of the places actually seem vaguely Venice-like, some of them are ridiculous comparisons.
I think my favorite fake Venice from the article is Suzhou in China, which actually looks sort of like Venice (at least from the photo in the article) – except the boats are very Chinese and decidedly non-gondola-like. I love the idea that the canal and the bridge in the picture are somehow tucked away in a hidden corner of Venice that I have yet to find… Like Venice’s Chinatown.
Amsterdam is another of the more honestly Venice-looking cities on the list in this article. The city of Sète in southern France also looks convincingly Venetian, although there are also cars on canal-side streets in the article’s photo, and one of the most charming things about the real Venice is the lack of cars.
Aside from that, most of the cities in the article calling themselves the “Venice” of anything are stretching the comparison way beyond the breaking point. Just being near water isn’t enough, in my book, or even having an aqueduct running through one part of town.
I’m going to go out on a limb here and say that while it may be fun to visit a place that looks or feels a little bit like Venice, there is absolutely no place like Venice on earth. The places on the list of fake Venices might be worth visiting in their own right, but don’t check the real Venice off your list just because you’ve visited one of these other cities!
>> There are two man-made Venices included on the list, both at the bottom of the article. Can you name them both before you click through to the fake Venices article and read the whole thing?
fake Venice picture by oviduri