Italian Men Told to Keep Their Hands off Genitals – Their Own 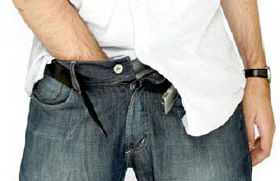 It’s Sunday night in Italy and I’ve just spent the day in Torino (which I’ll write about later), but I couldn’t let the day pass without popping in here momentarily to share a news story I saw the other day. It’s short, so you won’t be wasting too much of your day if you go read the whole thing, but here’s the gist:

Whatever their reason might be, a passing hearse or simple discomfort, Italy’s highest court ruled that men may not touch their genitals in public.

Apparently a man in Como was convicted in 2006 of “ostentatiously touching his genitals through his clothing,” but the court’s ruling goes beyond just this individual case. The superstitious Italians have a habit (well, the men do, anyway) of grabbing at their genital area as a means of keeping bad luck at bay. With this court ruling, they’re supposed to keep their hands away from their crotches, at least in public. I’m not sure it’ll have much (if any) effect in actual every day life, but the ruling itself amused me.