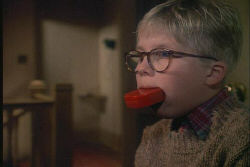 When you’re learning a new language, one of the most fun parts is learning how to swear. Of course, Italian swear words always sound prettier to my non-Italian ear than their English equivalents, but just because they sound prettier doesn’t mean their meaning is! When I was teaching Italian, one of the most common questions I’d get from students – always after class, in hushed tones – was stuff like, “How do you say ‘shit’ in Italian?” With that in mind, here are my 8 favorite Italian swear words.

Update: Now you can hear sample pronunciations for some of these words – wherever you see a blue arrow underneath the word, click on it and you’ll hear exactly how to say it!

And be sure to check out the second installment, Italian swear words part 2 – readers’ choice!

Let’s start with something G-rated, shall we? This is the less-questionable version of “merda” (see #6) – when you want to say a euphemism like “crap” instead of swearing and saying “shit,” you’d say “accidenti.” It looks so much more innocent, doesn’t it? Almost like, “Oh, what a horrible accident that I almost said a bad word” or something. Anyway, this is the one to internalize so that you don’t let loose with any of the really bad ones in front of passing nuns.

While many Italian stereotypes turn out to be less true on the ground in Italy than you might have expected them to be, the one about Italians using “mamma mia!” as an exclamation of surprise or annoyance holds water – they actually do use it. But personally, I prefer the equally common “Madonna!” if for no other reason than it amuses me in this predominantly Catholic country. You can even pair this one with “porca” (see #1) for more emphatic (and less polite) uses.

Now, because I’d often get the “How do you say ‘shit’ in Italian?” question from students, I’ve learned this one – but I’ve honestly not heard it as much in Italy as I have some of the other swear words on this page. This is, however, how you say “shit” in Italian, and it’s used in exactly the same way we use it in English. It also is incorporated into other phrases for more colorful meanings as well.

This is the other question I’d get from the occasional (bolder) students – “How do you say ‘fuck’ in Italian?” This is the answer – “cazzo” – although it literally is a colorful term for “penis” (see below), and this one you do hear.

Sometimes translating things literally is what makes these swear words amusing to me – but sometimes it works out quite well, and that’s the case with this little gem. Instead of calling someone a “dickhead,” in Italian you’d call them a “head of dick,” or a “testa di cazzo.” Which, really, is the same thing, right? This is also a general way of calling someone an “asshole,” but the Italian “testa di cazzo” has a bit more spice and so isn’t language you’ll want to use in polite company. “Cazzo” has lots of uses in Italian, like “culo” (see #3).

This is a red-hot number, so use it with caution. It’s the Italian equivalent of “fuck off” or “go fuck yourself,” but literally means something vaguely like “go do it in the ass.” “Culo” on its own (meaning “ass,” but in a much more vulgar way than the English can really translate) has many, many uses in Italian, but this is the one non-Italians can latch onto quickly – which is both entertaining and a bit dangerous! The accompanying gesture for “vaffanculo” is the same as it is in English – a middle finger.

Here’s an example of an exclamation that is really only funny to me because I translate it literally in my head when I hear it. “Cavolo” literally means “cabbage,” but when you say it emphatically it’s kind of like the equivalent of “holy crap!” or a more forceful version of “wow!” Even better, in my humble opinion, is what happens when you put the innocuous-looking “che” in front of it – “che cavolo?” offered as a question is kind of like saying, “what the fuck?” but you’re really saying, “what cabbage?” Ah, I love that.

This is my favorite one, hands down. In English, I’ve got lots of ways to say, “well, dammit!” in varying degrees of colorful language. In Italian, it’s no different. “Porca vacca” literally means “pig cow,” but it’s used in much the same way we’d say, “crap!” or “damn!” or the like – it’s not the most polite way to say it, but it’s also not the worst. What I particularly love about it is the literal translation (it cracks me up to think people are saying, “pig cow!”), and what’s fun about this is that you can put “porca” in front of just about anything. “Porca vacca” is my favorite for its literal silliness, but “porca miseria” (“miserable pig” or “pig poverty”) is a very close second-favorite for my perceived sense of the melodrama that goes with it. You’ll hear variations on these at Italian sporting events when the home team does something stupid.

So, those are my 8 favorite Italian swear words. I know some of my readers know some colorful Italian phrases, so what are your favorites? Leave a comment below to share it with us!

And for more Italian slang and swear words, you could do much worse than Deirdre’s list on Beginning With I – she explains lots of the slang you might hear while in Italy, both polite and decidedly not so.

Bonus: Fare i gattini (FAH-rey ee gaht-TEE-nee)
Okay, I’ve never heard this one personally, but while researching the colorful world of Italian swear words, I discovered that to say someone is throwing up or (even more colorfully) “barfing one’s guts out,” you’d use this phrase – “fare i gattini.” Which literally would mean that you were “having kittens.” So, I have to wonder – what does one say when one’s cat is actually having kittens?