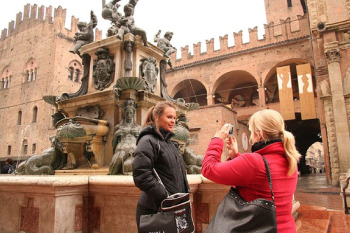 I’ve never heard of the Simon Anholt-GfK Roper Nation Brands Index (and is there any wonder, with a name like that?!?), but when I read a headline that says, “Italy tops for tourism in 2009 nation brands index” I’m sure to click through. After reading the article, however, I think the title’s a bit misleading. Yes, Italy does well on some of the categories by which nations are judged for this index, but it does badly on others – and overall ranks 6th.
First, what exactly is the Simon Anholt-GfK Roper Nation Brands Index? According to the organization’s website, it was way back in 1996 when Simon Anholt “coined the term ‘nation branding,'” and in 2005 he created the “Nation Brands Index” in order to “measure the image and reputation of the world’s nations, and to track their profiles as they rise or fall.” Countries tracked as part of the index are judged in six categories, and then the scores in those categories are combined to produce one overall score. To find out how each country is doing, the people at Anholt-GfK conduct surveys with about 1,000 people in 20 different countries.
The categories on which nations are judged are:

(If you’re anything like me, you’re looking at that list and thinking, “I’d be willing to bet I know which categories Italy’s not doing so well in…” And you’d probably be right. But we’ll get to that in a minute.)
Overall, Italy ranks 6th on the 2009 Nation Brands Index – which is the exact same spot it occupied in 2008. And in terms of the individual categories listed above, Italy claims the #1 spot in “Tourism,” #2 (behind France) in “Culture,” and #3 (behind Canada and Australia) in “People.” As a non-Italy-related aside, the United States jumped from a 7th-place ranking last year to 1st place this year, which Anholt-GfK thinks is due in large part to the fact that we elected President Obama.
I totally understand high marks in the categories where Italy does well on this index. I also understand low marks (i.e., where Italy doesn’t show up at all) in things like “Governance” and “Immigration.” What I don’t know is how Italy will use this information. Frankly, I’d be surprised if they used it at all. I mean, they didn’t move on the overall index from last year to this year, and while not moving backward could be seen as a sign of success in today’s economic and political climate, for a country that’s struggling with a recession and that continues to rely so heavily on tourist income it seems like paying attention to this information might be a good idea.
Anholt himself has some advice for Italy if they want to move up the rankings, most of which are valid criticisms:

Actively taking part in the global debate on the environment, developing a deeper interest in innovation and learning English: this is the world’s operating system.

I do think the younger generations are doing a great job of learning English, at least in the places I’ve been – but I agree that the other things Anholt mentions are spot-on.
Now, I’m no marketing expert, and I’m not even sure whether this particular index is the best one to use. But I do know that I’m not the only one who’s never received a return email from anyone at the Italy tourism board’s website (and some of the people I know who have heard back from them say they’re pretty unhelpful even when they do reply). I don’t know about you, but that doesn’t give me the best impression of a country that actually says they want you to come visit and spend lots of money there.
Italy, as any Italophile will tell you, is glorious in many ways and frighteningly backward in others. Some of the things in the latter category make for amusing stories, either told by expats applying for the necessary papers to stay in the country or by visitors who are shuttled from one person to another when trying to complete a seemingly simple task like buying a public transportation pass. But some of the things that we moan and groan about in Italy can make life difficult for travelers as well as the people who live there. And that’s no good for anyone.
Italy has been its stubbon self for centuries, changing only when it feels good and ready to. Sure, it’s sometimes quick to adopt new things – and sometimes so agonozingly slow it’s just easier to give up. But again, even if the Anholt-GfK list isn’t the list to be paying attention to, something tells me the people at the Italian tourism board should be taking advice from someone.
Sadly, I think they know that people will still flock to Italy by the millions, even if they get the run-around at customs or find open hours to be arbitrary or whatever other confusions they encounter. So even if there’s room for improvement, I think there’s probably very little incentive to change.
>> You can, if you’re so inclined, download the 2009 Anholt-GfK Nation Brands Index Summary here (it’s a PDF), and more about the background of the report here.
photo by Kekka