Naples is Drowning in Garbage – Again 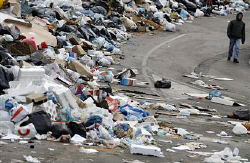 When I first read about the trash problem in Naples last Spring, I figured it was a short-term problem. I mean, who could live in a city where they kept having piles of garbage flooding the streets? Well, apparently the people in Naples can. Or, more to the point, the people in Naples are stuck living in a city where the local government can’t get its act together to figure out how to keep piles of garbage from flooding the streets.

If the photos I’m seeing out of Naples last week are any indication, the trash problem never really went away last year – it just got worse as time went on. Depending on where you look, in fact, Naples is said to have had a garbage problem for the last 10-15 years. Just a few days ago there were still giant piles of garbage lining the roadways, with at least some of it being set on fire from time to time as well. (And although residents burning the trash does make it go away, the fires are likely to be emitting toxic smoke, which isn’t any better than having the garbage on the streets.) More recently, protesters have started demonstrating throughout Naples and calling for the resignation of the city’s Mayor – one group even held Sunday Mass in the street, surrounded by the city’s trash heaps.

Local officials say that the area’s waste treatment centers continue to have problems, which leaves them with nowhere to take the city’s garbage. The government has even been trying to reopen a dump located in a Naples suburb which was condemned and closed – but local residents have been protesting that effort and even blocking the roads. Some reports indicate that one of the reasons for the closure of some waste treatment plants is that they are now the Italian mafia’s second major source of income (after drug trafficking).

In response to the most recent garbage crisis in Naples, the Italian government has sent in the military to begin clearing the rubbish piles from the streets. Police were also sent in to remove barriers to the condemned dump, to which protesters replied by throwing rocks. In the following scuffle between police and protesters, at least three people were sent to the hospital with minor injuries. Romano Prodi, Italy’s Prime Minister, has set a four-month deadline for cleaning up the trash in the city and solving the garbage crisis. Prodi named the country’s former police chief as the country’s new “trash tsar,” which is a title I hope sounds prettier in Italian.

While ordinarily things like this are intriguing to me, as I think about how it might be interesting or insightful to see them first-hand, I can’t say that visiting Naples anytime soon sounds like a good idea. I’d like to reward the government’s efforts at solving the problem by visiting after the streets are all cleaned up, though. Let’s hope that’s soon.

For more information, here are a few of the many news stories about the Naples trash problems over the past few days.
New “rubbish” protests in Naples
Protesters Celebrate Open-Air Mass at Dump Site as Trash Piles Up in Naples
Army Called in to Clear Naples Trash
Italy prepares “radical” plan for Naples trash
Italy’s PM orders “trash tsar” to end crisis
The rotten heart of Italy: See Naples and die (of the stench)
Operations begin to dig Naples out of rubbish crisis

And there’s this excellent piece on the health implications of this long-term garbage problem from NPR, which aired on Jan. 11th:
Naples, Italy Trashed by Garbage Crisis