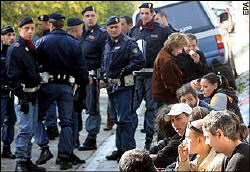 Italian attitudes toward immigrants aren’t always welcoming, and the recent killing of an Italian woman (allegedly by a Romanian man) isn’t exactly helping. The police have begun rounding up and deporting immigrants who are deemed to be “a threat to public security,” and Romanians are target #1. In fact, they’ve become the target of revenge-style attacks, such as one in Rome where four Romanians were stabbed and beaten.

The government publicly condemns attacks of revenge and isn’t directly encouraging such behavior, but it’s certainly not discouraging the racist sentiment at its heart when it specifically singles out Romanians in the new effort to expel immigrants. So far, officials are tearing down some of the camp sites set up by Romanian and other immigrants on the outskirts of Italy’s big cities, and the government has vowed to send 5,000 Romanians back to their home country within the next few weeks.

Clearly, the brutal rape and murder of the Italian woman was horrific and her killer should be brought to justice. But to single out and punish an entire ethnic group or nationality for the wrongs of one member of that group is short-sighted, not to mention xenophobic. These are the same narrow-minded and racist attitudes, generally borne of ignorance and fear, which led to the murders in the United States of members of the Sikh religion in the days following the attacks of 9/11. Why? Because they wear turban-style headdresses. These innocent victims were not affiliated with the 9/11 attackers – they don’t even share the same religion. They died unnecessary deaths at the hands of people blinded by rage and hatred.

Human beings aren’t perfect, and individual human beings are going to do bad things and make mistakes sometimes. I sincerely hope that the crimes of one person do not continue to be blamed on an entire nationality, in Italy or elsewhere – and if they are, the governments involved are no better than racists themselves.