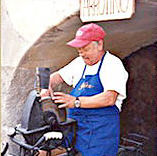 One of the many charms of being in Europe is seeing what the rest of us calls “the old world” in action. Sure, there are modernizations all over the place, but it’s still easy to have an old world moment no matter where you go in Italy. (Which is a very good thing, as that’s one of the reasons people keep going to Italy.) Shelley of At Home in Rome got one of those old world moments on video recently when she captured her neighborhood arrotino drumming up business.

First, however, a bit of background. When she first heard the call of the wild arrotino, Shelley was confused by it – and understandably so. She finally learned that it was a wandering knife sharpener, and when people heard his call they would come out with knives to be sharpened. She’s heard that some people still even lower baskets full of knives to him from upper storeys, though she’s not seen it. And I agree with her, that sounds more than a little dangerous to me. Maybe the arrotino has a metal umbrella he can put up when someone can’t be bothered to walk down the stairs.

At any rate, here’s Shelley’s original post about the arrotino, and here’s the new one with the video she managed to capture recently. The two posts combined are a great window into one of those old world charms which we expect when we visit Italy – even if most tourists never see all of them. Interestingly, an image search for arrotino on Google yields all kinds of interesting results.

While the knife sharpener in my neighborhood doesn’t roam the streets calling, “Bring out your knives!” like some odd ice cream vendor, we do have a local guy who parks his modified old van in our local supermarket’s parking lot every so often. The market will advertise his impending visit with flyers in our grocery bags. I’ve even gone beyond finding him charming and actually used his services. If I had an arrotino like Shelley does, however, I might save my knives and bring them out, one every week, just to watch him work.