The Bank Machine in Milan Ate My Debit Card 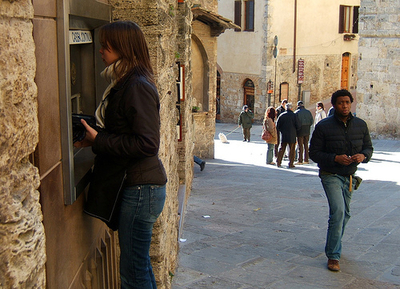 Just to prove that travel disasters (or things that seem like disasters) can happen to anyone, no matter how experienced or inexperienced you are, let me tell you about how my trip to Rome started this afternoon.
I left the apartment with plenty of time to get to Stazione Centrale in Milan, even with time to get there early, because since this is a holiday weekend I wanted to get on the train as soon as I could to make sure I had a spot to put my bag. Before I got on the Metro at Cadorna, however, I thought, “Hey, I might as well grab some cash while I have an extra minute.” I walked over to a bancomat I’d used successfully the week before, went through the same exact process I’d been through the week before, and was waiting for the machine to spit out my cash when I realized something was wrong.
On the screen were the words, “Please take your card within 30 seconds.” But no card appeared. I waited. But not only did no card appear, no cash appeared, either. And after pressing the “cancel” button a couple of times, the machine’s screen went black and then the words “Temporarily Out of Service” popped up.
Umm, what?
A nice man came up and helped me push random buttons on the machine (he even hit it with his fist – which did about as much good as that action usually does on machines), but after 10 minutes when the screen went back to normal (no more “out of service” sign) it was pretty clear that the machine had eaten the card.
Did I mention that this is a holiday weekend, and therefore the bank itself was closed? Or that I was en route to the train station for a week out of Milan?
Right. 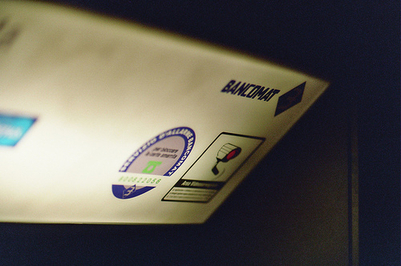 I thought for a moment about panicking. I thought for a moment about canceling the trip and staying in Milan so I could take care of the card issue – call the bank, figure out how to get cash, etc. But I knew I could pay by credit card at both hotels in Rome and Naples, and I knew if it came to the worst I could eat in restaurants that only accept credit cards (they’re often more expensive and not always as good, so it’s nicer to have the option to eat at cash-only places). I also knew that I could, at a ridiculously high interest charge, get cash on my credit card if I needed to. Or have the husband wire me money via Western Union.
So I didn’t panic.
I got on my train, where I am as I’m typing this, and sent an SMS on my mobile phone to my pal in Rome, Christine – AKA Miss Expatria. I asked her if I could use her Skype headset (having left mine in Milan) to call my bank. She called immediately, and said that in her experience, she’s gotten new cards Fed-Ex’d to her within two days. So, when I arrive in Rome my first order of business is going to be to head for the internet cafe Christine directed me to and – as she says – not take no for an answer until the bank agrees to send a new card to my hotel in Rome.
At any rate, I’m confident there’s a way to not spend the rest of my time in Italy without the ability to get cash, and one way or another this will get worked out. But it just goes to show you that even if you do everything right – call your bank before you leave and tell them you’ll be using the card in Italy, make sure the symbols on the bank machine are the same as on your card, and follow the onscreen instructions – sometimes (as the saying goes) shit happens.
Update: One week later
The short version of the “what happened after I got to Rome” story is this – I called my bank, they said they could only send the card to the address on file (read: my home in Oregon), I said that was unacceptable, and someone they transferred me to in the fraud department finally agreed to expedite shipping a new card to me at the hotel I’d be staying at in Naples. He even read the address back to me after I read it to him. 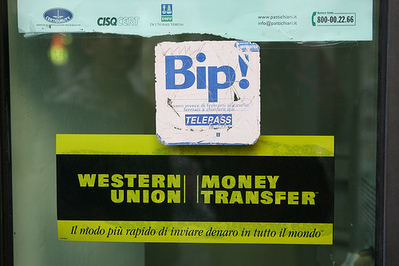 I then talked to the husband, who got acquainted with the intricacies of Western Union in the U.S. Basically, in the U.S. where everyone and their dog has a credit card (which is kind of a problem, if you’ve been paying attention to the economic news, but that’s another story altogether) Western Union seems quaint. The husband said he had to spell my name five times – to someone he was talking to in person – before they got it right. On my end in Rome the next day, however, it couldn’t have been simpler. It’s obvious which place is more accustomed to Western Union as a common way to send and receive money.
When I got to Naples, there was no package. On day two in Naples there was still no package. Logging onto my bank’s website and contacting them revealed that they had, in fact, sent the card to the address on file and had no record of an alternate address. I’m gearing up to get good and angry at them when I get home and can call their toll-free number, but for now the husband is so well-versed in the Western Union thing he’s doing that again for me.
So, I’m lucky that I had someone back home I could contact to send me money. Maybe I should have brought a spare debit card with me, but who does that? The banks don’t even suggest it. As a traveler, I’m annoyed at the lack of sympathy on the part of my bank, and their inability to do anything but suggest I call the toll-free number (which, of course, doesn’t work outside the U.S.). As someone whose job it is to give advice to travelers, I’m at a loss as to what to tell people, other than “always have someone back home who can wire you money.” Which doesn’t seem like much of a solution at all.
If you’ve had experiences with this kind of thing that ended differently, have suggestions for people about how to handle this kind of situation, or any other constructive thoughts on this that would be helpful please share in the comments below.
photos, from top to bottom, by pedro prats, lcars, wwwes