The “End of the Internet” in Italy? 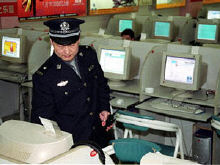 The Italian blogosphere is abuzz at the moment with the announcement of a proposed law which could severely restrict the rights of everyday people to have blogs and express whatever the heck they want to express on them. The undersecretary to the President of the Council in Italy (don’t even ask me what the heck that title means, I haven’t the foggiest), Ricardo Franco Levi, has drafted a law which would require different media outlets which publish editorial matter – including blogs – to register with a central registry, and even pay a tax. Bloggers who didn’t register would then be subject to stiff fines. (One of the odd side effects of this law is that bloggers, even part-time, doing-it-for-fun bloggers, would be classified as professional journalists.)

Political activists in Italy are up in arms, as you might imagine, and the words “the end of the internet in Italy” have been posted on several blogs. According to this blog, government officials have attempted to make it clear that this proposed law would not apply to personal or non-professional blogs or websites, but – as this post also points out – it doesn’t seem that there’s been much of an effort made to explain what constitutes a professional site and what doesn’t.

The language of the draft law was approved by the Council of Ministers (again, don’t ask) on October 12, but still needs to be discussed, debated and ultimately approved or rejected by the full Parliament. It would seem unlikely that such a law would pass, especially as unclear as the language now is, but there are things that happen every day in Italy which surprise me. So really, I’ve no idea what’ll happen with this one.

To get your rage on with some of the outspoken critics of this proposed law, check out Beppe Grillo’s English blog here, and another post here.