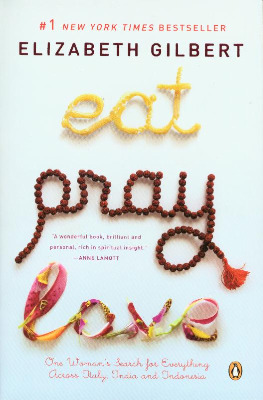 You can hardly throw a cone of gelato these days without ending up on an article about or advertisement for the movie “Eat Pray Love,” which opens in theatres on August 13, 2010. I read Elizabeth Gilbert’s book what seems now like an eternity ago, and even then I was late to the party. I’d had people telling me for months, “Oh, you have to read it, you’ll love it – it has Italy in it!” (I’m pigeon-holed, for better or worse, to being interested only in Italy-related things, apparently.)
So perhaps my expectations were high when I finally did pick it up. Maybe I’d been led to believe it was one thing, when it’s really another thing entirely. And there’s a chance that, in the end, it just wasn’t a book I was ever going to love, regardless of my expectations or what it was “really” about. But because it’s all over the inter-blogo-media-sphere these days (and because I’m routinely still asked if I’ve read it), I wanted to throw my two cents out there on why I did not like “Eat Pray Love.”
It boils down to three main things.

Let’s face it, there’s a reason I’m pigeon-holed, right?
At first, I couldn’t decide whether the book starting off with the Italy section was good or bad. Would it mean I’d love the book right away because it was so Italy-rific, or would it be all downhill from the Italy section into the other parts of the world? It turned out to have little bearing on how much I liked the book overall (though I probably wouldn’t have continued reading if it hadn’t at least started in Italy), but when I finished the book I realized I was a little miffed at how short-changed Italy had been.
The India and Bali sections of the book are intense (especially the India portion, for obvious reasons), and they’re almost entirely focused on the time Gilbert spent in those places. Those parts of the book are very much of those places, even if they’re not what I’d consider travel writing (more on that later). But the Italy section? Because it was the first destination on Gilbert’s year-long journey of introspection, and because it’s the first section of a book that must also give the reader a little background, the Italy section of “Eat Pray Love” felt to me like it was more about Gilbert’s breakdown and less about Italy.
Sure, there’s some fun Italy stuff in that section. But there wasn’t nearly enough Italy in there to make me like the book, especially when there were other reasons for me not to like it.

2. Not a Travel Book

I don’t pay attention to the publishing world, and it’s possible I’m off-base here (it’s happened before – shocking, I know), but it seems to me that when I was hearing about the book – both before and after I’d read it – it was in the context of it being a “travel book.” It was a book, I believed when I picked it up, about a woman who spent a year living in three different countries. Sure, it was a memoir, and yes, I expected it to be personal – but I also expected it to be way more travel-y than it was.
Based on my completely un-scientific polls of other people I know who didn’t love the book, I really think that Gilbert’s publisher did her a disservice by marketing “Eat Pray Love” as a travel book or even semi-travel book. The three places Gilbert lives during her year of soul-searching were important keys to her growth that year, and they each play a role in the book. It’s such a secondary role, however, that anyone who picked the book up hoping to read a travel memoir would, I think, be sorely disappointed.
I still wonder how I would have felt about the book if I thought it was about one woman’s quest for inner peace that just happened to take place in Italy, India, and Bali. I might have still read it, I don’t know – but if I had still chosen to read it I think at least my expectations wouldn’t have been so far off.

This is a more personal reason for why I didn’t like “Eat Pray Love,” although I know other people for whom this reason fits, too: I just couldn’t relate. The book is personal – so personal that I’m not surprised when I hear people say they couldn’t relate to it. In a way, it’s kind of miraculous that anyone but the author can ever relate to a personal memoir, but I guess that says something beautiful about the human condition – that we’re more alike than we realize. But one of the other lovely things about the human condition is that we’re not all alike.
I’m kind of the opposite of a religious person, and I’m not particularly spiritual, either. I’m not immune to a transcendent experience – I’ve been awed by both man-made structures and scenery untouched by human hands – but Gilbert’s spiritual journey, which makes up the bulk of the book, was one I just could not relate at all. Much of it felt voyeuristic, like I was going unnoticed sitting in the corner of a deeply personal meeting with someone’s therapist, which made me slightly uncomfortable, too. But the bottom line is that the book was simply too dominated by the spiritual for it to be a book I would like.
In truth, if it weren’t for the fact that I desperately hate not finishing books so much that I’ll slog my way through nearly anything just to say I didn’t quit midway through, I would have put the book down before I’d even finished the India section.

But it’s not all bad…

Okay, yes, I do have a “thing” about not finishing books, but even without that it wasn’t like “Eat Pray Love” sat on my nightstand for months with me only reading a few pages every few weeks. It is, despite the issues I have with it, well-written enough that it’s an easy read. I think Gilbert deserves credit for being brave enough to talk about such intimate details of what was clearly a very difficult year in her life (I know enough people who were moved by her story to think that there are women for whom “Eat Pray Love” was something akin to permission to be kind to themselves, and for that I think Gilbert deserves a round of applause).
I have friends who genuinely loved “Eat Pray Love” and who are anxiously awaiting the movie’s release, and that’s fine. I don’t think the book is one of those “guilty pleasures” that people should feel badly about enjoying – I just didn’t enjoy it myself.
If you haven’t read the book and you’re curious what all the hubbub is about, you can buy “Eat Pray Love” on Amazon – there’s time to read it before the movie comes out next month.
And if you haven’t seen a preview for the film yet, here you are: