I will admit that there are things – some pretty big things – that make being a woman in Italy difficult (to say the least).
I know women who have caused shock when they said they had a job outside the home (it was assumed they were a stay-at-home wife, if not a mom). I know women who have had it up to here with trying to get anywhere in the work world (and some of them have left Italy as a result). I know the current prime minister’s very public attitude toward women as little more than pretty puppets isn’t helping the Italian equal rights movement get out of the dark ages.
But for this post, I’m going to push all that to the side for just a moment and tell you about why I love being a woman in Italy.
I hope not to offend any of my feminist friends (since I, too, consider myself a feminist), I just think it’s not all bad news when it comes to being female in Italy. We’ll see if anyone else agrees with me by the end of this post.

1. I pay more attention to my appearance. 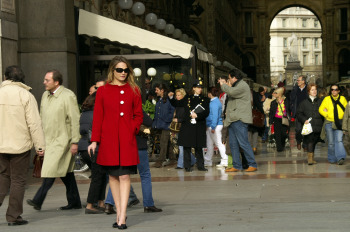 I am one of those people who has a non-traditional work environment. Specifically, I work from a home office (AKA a desk down the hall from my bedroom) the vast majority of the time, which means I go out far less frequently than someone who commutes to an office everyday. As such, I don’t always display the utmost in personal hygiene.
In other words, I look like a slob most of the time.
When I’m in Italy, on the other hand, I don’t let myself go at all. For one thing, even though I’m still working most of the day I’m meeting up with friends most evenings for aperitivo or dinner or gelato, so I’ve got to be ready to head out the door when they’re home from work. For another thing, my beloved morning ritual of going to the corner bar for a quick shot of espresso just isn’t possible if my hair is all kinds of disgusting and I’m wearing the same sweats I’ve been sporting for three days straight.
Heck, one gal I know says her sister-in-law in Milan won’t even take out the trash without performing a minor makeover on herself.
It could be that the higher probability of interaction with other human beings is all that separates my home-office life from my Italy-work life, but I think it’s more than that. I think it’s also the higher standard for fashion in Italy. And even though I don’t think I’ll ever live up to that standard, I do want to appear as if I’m making some effort. 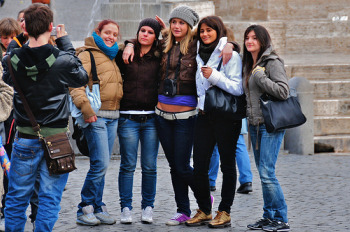 I don’t care how self-confident you are, there is nothing like a genuine compliment to make any day brighter. And if you’re like me and you’re putting in a little extra effort to spruce up your appearance in Italy, then a compliment about how you look is all the more appreciated.
Because really, if I’m going to take the time to bathe, iron a shirt, and put on makeup, I want someone to notice.
In Italy, they notice. At least the boys do. And they’re not shy about it, either. The once-over look is done slowly, with care, and it can include a good deal of eye-contact. Mutterings about a beautiful woman passing by aren’t made under the breath, they’re loud enough for her (and others) to hear.
Sometimes they can go overboard – there are all those stories of men in Rome pronouncing women to be “buona” instead of “bella,” when the former is traditionally used more for something you’d eat – but in my experience they’re not threatening. In fact, I think if you actually confronted them about something they said, they probably wouldn’t know what to do.
Me? I don’t bother confronting anyone. I just enjoy the momentary glances, the up-and-down looks, and the occasional “ciao bella.” Until they’re proven to be something else (which I hope never happens), I take all of these as innocuous and sweet signs of appreciation, and nothing more – or less.

3. Chivalry is not dead. 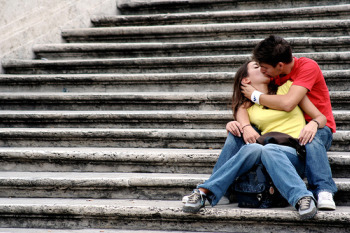 As I alluded to at the start of this article, there’s plenty about Italy’s old-fashioned nature to be irritated by if you’re a woman – but it’s hard to get too pissed off about the small “chivalrous” acts that are performed all day long without anyone thinking of it. Like point #2 above, it’s because they’re done with sincerity and not with any untoward foundation that I’m able to appreciate them for what they are – and not assume they’re anything else.
The kinds of small acts of chivalry I’m talking about – things like men holding doors open for women – aren’t unknown where I live in the United States, they’re just less common. And to be completely fair, that’s largely because the movement for women’s equality in the US is eons further along than the one in Italy – most of the American men I know have been scolded at one time or another for pushing in a woman’s chair or insisting she go through the door first, so you can hardly blame them if they stopped doing that stuff altogether.
So maybe when I’m in Italy and I experience those little chivalrous acts, those things that are done completely sincerely and without thinking, I notice them because they’re things we’ve trained men in our country out of doing. Maybe if I was in Italy 365 days a year they’d start to annoy me the same way it annoys me at home when I get to a door first and the guy I’m with doesn’t walk through before me.
All I know is when it’s a genuine thing done simply because that’s how someone is wired I take it as a sign of respect and not a sign that they think I can’t open doors by myself. 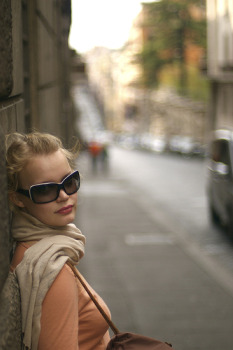 This is sort of an offshoot of points 1 and 2 above, and it’s the part that makes all of this more equitable (lest you think this is all about rewards for the girls and there’s nothing in it for the boys). Italy is most definitely not a country where it’s acceptable for women to do anything and everything men do, but there are also situations where women traveling in Italy will feel more free to express themselves than they might otherwise feel at home.
Just as one might assume a man in the United States was being far too forward if he were to give an unabashedly slow once-over to the woman next to him on the street, one might also assume a woman was being unforgivably brazen if she were to do the same thing. Or, for that matter, if she were to simply wear something considered “provocative.”
In Italy, on the other hand, you’re going to have to work pretty hard to be considered provocative.
I’m being a little flippant here, especially since this is a Catholic country after all, and you absolutely need to dress more respectfully when you’re going into churches, but anyone who’s been to Italy before can attest to the fact that you don’t have to look too hard to find women who are dressed in a way that says, “I look good, dammit, and I’m going to show off this body.”
Women in Italy are bold. And I love them for it.
They may be surrounded by chivalrous men, but they aren’t afraid to speak their minds. They may have had years of confidence boosters in the form of all those once-overs, but they’re not afraid to look you up and down, either. Italian women will cast a second glance at fine specimens of masculinity, and they’ll smile when they get caught. More often than not, those two ships continue on their particular routes and don’t even pass in the night – it’s just a sort of, “Yes, I acknowledge your beauty, thanks for sharing it with me” moment between them.
And this, to my mind, means women traveling in Italy should do the same thing. Don’t go crazy with it, don’t get yourself in trouble, and certainly don’t go casting second glances when your boyfriend or husband is watching. But this is certainly one easy way for women travelers to live like a local.
photo credits, top to bottom: Jessica Spiegel (and may not be used without permission), Ed Yourdon, jonrawlinson, wili_hybrid