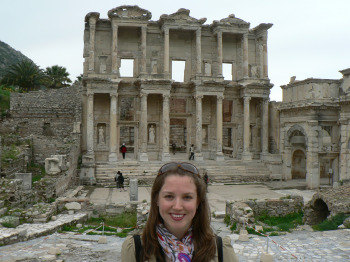 For the third installment of the WhyGo Italy interviews series, I’m pleased to introduce you to my blogging friend and fellow Italophile, Melanie Mize Renzulli. I’m personally always intrigued by the people who pick up and move their lives to another country – and Melanie’s had the good fortune of living not only in Italy but in other foreign lands as well. So the fact that she’s a serial expat makes her that much more interesting as far as I’m concerned – although our shared love of Italy was an excellent place to start.
I hope you’ll enjoy getting to know Melanie!

What first brought you to Italy? Did you love it instantly, or was it a process?

I was in love with the idea of Italy long before I ever visited, having taken some Italian and art history classes at university. The first time I went was with my Italian-American boyfriend (now husband). I had just graduated college and was doing the backpackers’ Eurail tour from Amsterdam to Italy and back again.
In retrospect, my Italy initiation was not typical. Our itinerary included Verona and Bologna, with side trips to Florence and Ravenna. Part of our Italy time was spent visiting my husband’s distant relatives in Verona. We really got the taste of the “old country” when we stayed with distant aunt Zia Caterina, who kept an eternal flame burning in front of the photo of her deceased husband. I found that fascinating. Also, as a young man, my husband’s father had worked in Bologna and several of his friends were still there. They took us out for a very yummy dinner (tagliatelle Bolognese, of course) and guided us on a stroll under the city’s arcaded walkways and to Piazza Nettuno.
I loved Italy instantly, from drinking my first Campari in the shadow of Verona’s Arena to visiting the Botticelli room in the Uffizi. Other things I’ll never forget from that trip were the Byzantine mosaics in Ravenna and eating risotto in the Florence train station, which seemed like haute cuisine at the time!

I have trouble with this question when it’s asked of me, but that doesn’t mean I’m not going to inflict it on you. So, what’s your favorite place in Italy, and why? If you can’t limit it to one, that’s okay!

My favorite place in Italy is Rome – hands down. I ended up moving to Rome a few years after that first post-college visit for a couple of reasons. First, an Italian friend living in Washington asked me to move back with her to Rome to be an au pair to her 7-year-old daughter. I weighed the awkwardness of working for a friend and taking a massive pay cut (these were pre-euro days), and decided that it was a travel opportunity I could not pass up. It was especially enticing because I had recently begun getting into travel writing for a few print and online publications. So, I looked at it as a chance to really get to know a city and a culture that I had always been interested in.
Going back to your first question, learning to love Rome was a process. The traffic was (is) atrocious, and I remember practically breaking down and crying once when I was unable to cross the street at Piazza Venezia (I managed to cross by following a gaggle of nuns). Also, given my paltry salary and my childcare duties, I wasn’t living the dolce vita that I envisioned. I ate lots of pizza and ended up walking everywhere to save money. But I think that because I lived there and got to experience the rhythm of the city on a daily basis is why I ended up falling in love with Rome.
All that said, I’ve yet to find a place in Italy that I don’t like.

You’ve written about traveling in Italy for Frommer’s, Michelin Guides, The Washington Post, Saveur, and Travel Channel Online. What are the three best pieces of advice you would give to people visiting Italy?

Best advice for traveling to Italy:

What’s the most challenging thing you think first-time travelers to Italy encounter? And, if it exists, what’s the easy(ish) way to make that thing less challenging?

I definitely think that there are challenges for first-timers in Italy, but it depends on a traveler’s destination, mode of transportation, and many other factors. The traffic signs, patterns, and rules (or lack of rules!) are slightly different than those you’ll see in North America. I’ve also always thought the public transport rules were confusing for non-Europeans. For example, bus passengers usually don’t have to show a ticket or fare to the driver and instead have to validate their tickets on a machine in the middle of the bus. This is the standard in much of Europe, but in Italy I always felt like it was setting tourists up for a “gotcha!” moment because it’s hard to figure out what to do.

I know you’ve been an expat in a few different countries, so please give us a run-down of all the places you’ve lived. 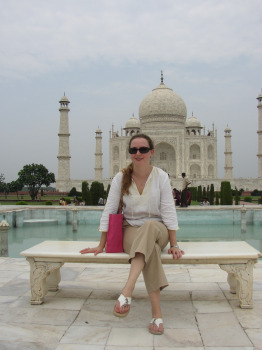 The expat experiences in Germany, Italy, India, and Turkey were all very different, but mostly because of my personal circumstances and perspective. Germany seemed extremely foreign through my naïve, 17-year-old eyes, but almost felt like home when I would transit through there on the way to the States from India or Turkey.
Another thing that has colored my experiences is family. My expat experience in Turkey, for example, will always be special because I went there with one child and came back with two! The Turkish hospital, by the way, was deluxe; I used the free wi-fi to e-mail pics of my youngest son only an hour or two after he was born. Ah, technology!
Technology has also done a lot to both enhance and diminish the expat experience. No one was using e-mail when I lived in Germany, so I was writing letters all the time on that thin airmail paper (is that even sold anymore?). In Rome, I would spend my free time in Internet cafés. By the time I was living in Ankara, I was talking to my mom via Skype every day and downloading NPR podcasts to listen to on our long drives to the Turkish Mediterranean or the Black Sea. So, even though I was living very far away from friends and family, it didn’t feel like it. Of course, the drawback to living within an expat community is that you can become very comfortable and forget to immerse yourself in the local culture. So I always try my best to learn the language, follow customs, and get outside of my element every once and a while.
As far as making friends, however, there is a similarity with all of the places I’ve lived. By circumstances – and, yes, sometimes by design – I’ve always seemed to befriend Italians when living abroad. It’s my husband’s belief that if you befriend the Italians, you’ll always eat well. It’s a policy I have no problem abiding by!

Befriending Italians means you’ll eat well – what a fantastic piece of advice. Thanks for answering my questions, Melanie! 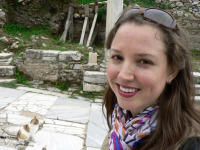 Travel writer Melanie Mize Renzulli has lived on three different continents and in five different countries, but has a special place in her heart for Italy. Melanie wrote and/or contributed to several guidebooks about Italy, including The Unofficial Guide to Central Italy and Michelin’s Green Guides to Italy, Tuscany, and Rome. She has also written about travel, food, parenting, and other lifestyle topics for TravelChannel.com, Babble.com, and National Geographic’s Intelligent Travel Blog. Melanie blogs about Italy on Italofile.com and about everything else on MissAdventures.com. And here’s a fun fact for you – Melanie started her personal blog on BootsnAll’s travel blogs platform back in 2004!