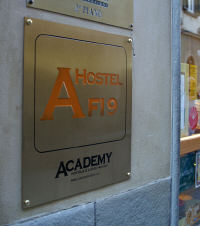 Florence is one of those cities that is overrun with tourists pretty much year-round, so prices for accommodation are higher as a result. Finding a cheap place to stay is a must if you’re traveling on a budget, but not everyone likes the dorm-room atmosphere of hostels. Thankfully, there are hostels that don’t really feel like hostels – and the Academy Hostel in Florence is one of them.

To start with, if you’re used to Italy hostels only being cheap when they’re miles away from anything you want to see, you’ll be amazed when you see where the Academy Hostel is in Florence – it’s not only within sight of the Duomo, you can see the Duomo from some of the rooms and hear the bells from the Campanile loud and clear. The front door to the hostel is less than a block from Duomo Square. In short, the location is enough to make anyone say “wow.”

On top of that, the hostel itself is new – though it’s in an historic building, the interior has been entirely remodeled and renovated, and the hostel was just opened in December of 2007. Everything is spic and span, and although the rooms had a bit of that hospital-room ambience when I visited, I was told by Ivan, the manager, that things were scheduled to be painted the week after I left. So it’s likely that there’s quite a bit more color in the Academy rooms now.

The furniture in the dorms is modern and move-able – everything from the beds to the night stands to the dividing walls is easily moved, so you can re-configure any room however you like. This is especially nice if your traveling group takes up a whole dorm, so you can move the dividing walls out of the way and make room for a late-night gab-fest. In fact, when you check in you get a portable reading lamp along with your key – if the individual reading lamps were somehow affixed to the walls, the beds would have to stay in one place. But a move-able room requires a move-able lamp! 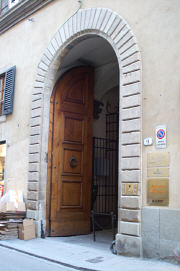 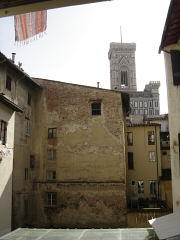 L-R: Academy Hostel’s main door on the street, and view of the Campanile from the private double room

Outside the door of each dorm room there are shoe boxes on the wall, so that if you’re returning late at night and you don’t want to disturb the other people asleep in the room you can deposit your noisy shoes into the cubby outside your room and then creep on tiptoe in to go to bed. Each dorm room also has what Ivan called a “makeup station,” with a large mirror and several electrical outlets in one area, so that if someone is using the bathroom you don’t have to wait in line just to do your hair or makeup. 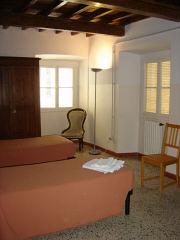 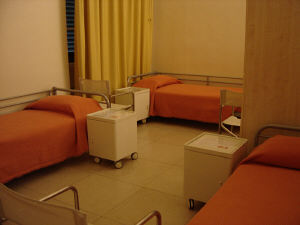 L-R: Private double room, and example of a dorm room

There is a big flat-screen TV in the reception area, with a few couches set up around it, and a few computer stations on the other side of the giant reception room. There’s a kitchen just around the corner from the reception desk, and breakfast is provided free every day. There’s also a washing machine and dryer off the kitchen, where guests can do their laundry for €2 per wash/€2 per dry – the hostel provides the laundry soap. 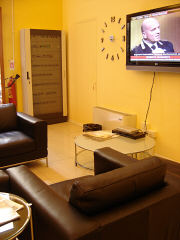 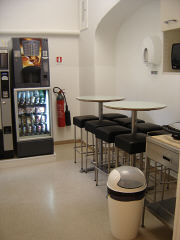 In addition to the painting Ivan said was going to be done, he would also like to expand the hostel (I know, they just opened and they already want to expand!) to the rest of the floor that they’re currently on in their building, and/or take the floor above the one they’re on. I don’t think there are any immediate plans to do either, but check when you’re booking whether there’s any construction going on!

It’s not just that the Academy Hostel is new that makes it feel less like a hostel than some of the others I visited, it’s also that the hostel has a couple of private rooms as well. They’re not en suite, so you’re still sharing a bathroom, but the price is right for such an exceptional location. I stayed in the double room, which is the largest private room in the hostel. There’s a single right next door, and those two rooms share one bathroom a few steps down the hall. There are also two other bathrooms down the nearby stairs if the one down the hall is occupied. From the private double room, you can open the window and see the Campanile – and hear the bells! This might not be ideal if you’re a light sleeper, but I loved it.

I only had a few complaints about the Academy Hostel, although I think at least one of them is due to the fact that they’re so new. The others, however, could be safety issues and I’d like to see them make some changes in those areas. Here are the issues I noticed:

Having said all that, I’d happily stay in the Academy Hostel again – the location alone is enough to make me want to go back, but I liked the staff and the interior quite a bit as well. And if I was traveling in a group, the smaller dorms would be perfect. Otherwise, I’ll still stick with one of the private rooms. That’s just the kind of girl I am.

Location: Via Ricasoli 9, 50100 Florence
Contact Information: tel: +39 055 239 8665; fax: +39 055 364 5447
Common Areas: reception/lounge/TV area, kitchen/breakfast room, computer stations, terrace
Dorms: all dorms are mixed dorms, there are no bunk beds, all furniture in the dorm rooms is move-able (including partition walls)
Private Rooms: one double and one single, no en suite bathrooms
Curfew/Lockout: no curfew, no lockout; the building’s main door is closed when the doorman isn’t on duty (after 19:00 and all day on weekends), but you just ring the Academy Hostel’s bell and get buzzed in, 24 hours a day
Check-in/Check-out: check-in is after 14:00, check-out is 11:00
Transportation Options: hostel is easily reached on foot from the train station; there are bus stops nearby as well, because the hostel is so close to Duomo Square
Safety: I felt very safe in the hostel, the street outside the hostel is in a perfectly safe area (only issue was with the keys, which I mentioned above)
Fun Factor: I don’t think the hostel was full when I was there (mid-March), but I rarely saw people in the lounge or reception area; so I can’t say it had a real “hang-out” vibe, like you’d want to stay and chill out in the hostel; might be different if the hostel were full
Freebies: breakfast, internet access, WiFi throughout hostel (signal was a little weak in my room, far away from reception), soap for doing laundry
Extras You’ve Got to Pay For: laundry, anything from the vending machine
Good to Know: It isn’t clear when you get to Academy Hostel what floor it’s on – it says “F19” on the sign next to the front door, which didn’t mean anything to me. I took a chance that 19 would be on the 1st floor (that’s the 2nd floor to Americans), and it was – so when you arrive, walk down the corridor and past the courtyard on the left, then turn right into the stairwell. Take the elevator up one floor, or walk up one floor, and reception is to the right.
Ivan is from Spain, and can chat effortlessly in Italian and English as well (probably others, too, I didn’t ask); everyone who works the front desk speaks at least some English.
Payment Accepted: major credit cards, cash (and they prefer you pay upon arrival)
Booking: Academy Hostel booking