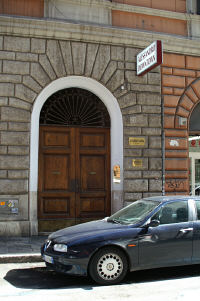 With the success of Alessandro Palace, not to mention a steady flow of backpackers flooding into Rome, Alessandro (yes, there really is one) opened up another cheap Italy hostel on the other side of the train station from the Palace. The success of the second hostel has led more recently to it splitting into two, but we’ll get to that some other time. For now, let’s focus on Alessandro’s second venture in Rome – Alessandro Downtown.

Alessandro Downtown is a few minutes walk toward the southwest of Termini station, and the reception desk is on the 3rd floor (2nd floor in Italian). When I visited, it was cheerfully attended by Luca and Esther (who operate together like some sort of comedy team), and it was Esther who showed me around. There are rooms on the same floor as the reception desk, and then more rooms upstairs.

The common areas include kitchen and lounge areas (on the same level as reception) which were recently completely redone – the kitchen, in fact, used to be across the hall where the lounge now is, so the present kitchen is brand new. The walls in the new spaces are covered in pretty new tiles and murals, the rooms are brightly lit and the furniture and appliances are modern and new.

>>Check out my other Rome hostels reviews, too! 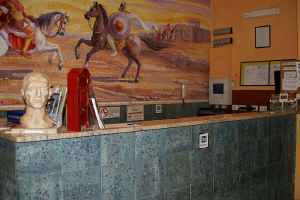 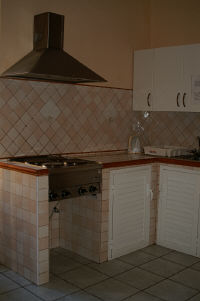 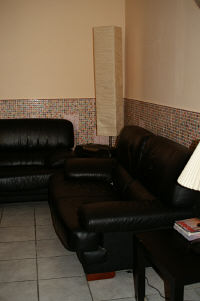 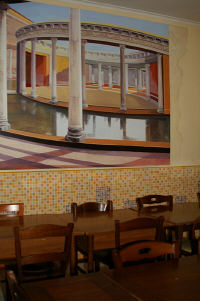 Alessandro Downtown, like Alessandro Palace, has only mixed dorms or female-only dorms available. The largest dorm is an eight-bed room, and there are a few private rooms. The smallest available are doubles, some of which have private en suite bathrooms and others of which make use of shared bathrooms. 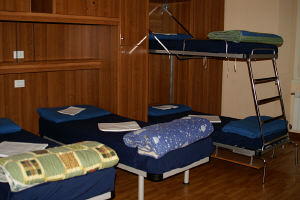 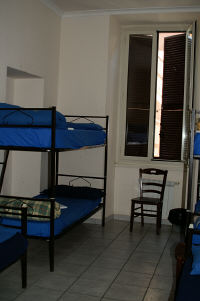 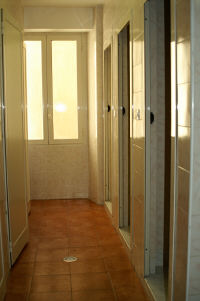 One of the shared bathrooms (showers on one side, toilets on the other)

Because Alessandro Downtown shares a history and ownership with Alessandro Palace, the great bar at Alessandro Palace also offers the same hostel guest discounts to the people staying at Alessandro Downtown. This includes taking advantage of the Palace’s regular free pizza parties, if one coincides with your stay (check at reception; also ask about Downtown’s free pasta parties, in case any of those are happening while you’re there, too). So even if you’re staying Downtown you can still go hang out at the Palace. The best part, aside from the cool Alessandro Palace bar to hang out in, is that this gives you two hostels’ worth of new friends to meet.

Location: Via Carlo Cattaneo 23 00185 Rome
Contact Information: tel: +39 06 443 40 147; fax: +39 06 493 80 534
Common Areas: brand-new kitchen and TV lounge/common area
Dorms: mixed and female-only, largest has eight beds (some en suite, some not)
Private Rooms: some doubles (some en suite, some not)
Curfew/Lockout: No curfew, no lockout (though they do ask you to stay out of the cleaning crew’s way as much as possible; cleaning hours are from 10:00 through 15:00)
Check-in/Check-out: Check-in is generally after 14:00, check-out is 11:00. You can check in or out at any time; if your room isn’t ready when you arrive or you want to check out and explore the city some more before your train or plane leaves, there’s a luggage storage option at the front desk.
Transportation Options: The hostel is within walking distance of Termini, so getting out of town is easy, and Termini also has a Metro station and a big bus terminal, which makes getting around town easy, too.
Safety: This is the side of the train station that some people may find less than appealing (after dark especially), though Luca and Esther told me they’ve had no reports of problems from guests. The hostel building and the hostel itself are completely safe.
Fun Factor: The common areas of Alessandro Downtown are inviting and bright, and there are some times when there are nearly-nightly free pasta parties held at the Downtown location (check on the schedule when you get there), but it seems like most of the fun is over at Alessandro Palace in the bar at night.
Freebies: breakfast, bed linens, use of guest kitchen
Extras You’ve Got to Pay For: internet access, locks for luggage lockers (if you didn’t bring your own), towels available for rent or purchase (if you don’t have your own)
Good to Know: There’s no air conditioning at Alessandro Downtown, and although fans are available that may not help much in the height of a Roman summer.
Payment Accepted: major credit cards, cash
Booking: Alessandro Downtown booking