Florence Hotels With a View of the River: Getting "A Room With a View" in Florence 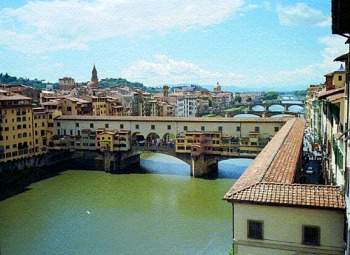 I took advantage of a lazy Sunday recently to watch a movie I’d never seen before – the Merchant-Ivory adaptation of E.M. Forster’s classic novel, “A Room With a View.” Those familiar with the story will know that it takes place partly in Florence, and the name of the book (and the movie) refers to the room in the Florence hotel which two characters are promised – a room with a view over the Arno River.
After seeing the film, I thought I’d have a look to see if there were any hotels in Florence with a view of the river that don’t charge a small fortune for the privilege of such a view. And I must say, I’m quite surprised to say that there are some places where the prices actually seem reasonable. Of course, most of the Florence hotels with a view of the Arno are more expensive, but it’s the kind of luxury you might be willing to splurge on if you’re in the midst of your Italy honeymoon or some other romantic getaway.
All of the hotels listed below have some kind of view overlooking the river in Florence – some of them boast views from lots of rooms, some of them only have river views from some of the rooms or from a rooftop terrace. So if you’re booking one of these places specifically because of the view, make absolutely sure you’re communicating that to the people at the hotel so you’re sure to get your own “room with a view.” Something tells me a breakfast conversation when you arrive won’t prompt another guest to offer a room-swap with you so you can have a view, despite what happened in the movie.
There’s a map below that has all the hotels listed in this post marked on it, so you can see where they are not only in relation to the river but also to other attractions in Florence as well. You can read more about each one – and book it, too – by clicking on the icon on the map, or by scrolling down to see the brief descriptions and a link to more information underneath the map.
And yes, the actual Florence hotel where “A Room With a View” was filmed is on this list, too!

Hotels in Florence With a View of the River Arno