Hotels in Florence Near the Pitti Palace 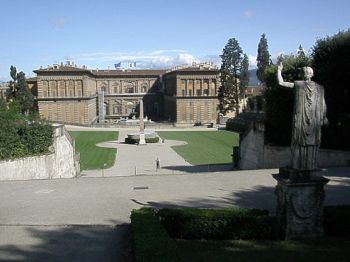 Florence’s historic center is so easily walkable that if your hotel is within sight of one of the major monuments chances are very good it’s only a short walk to pretty much all the other monuments, too. But despite that, there’s still something glorious about booking a hotel that’s a stone’s throw from a particular attraction, especially if it’s one that you want to see repeatedly. And if the Pitti Palace and Boboli Gardens are high on your list, then having a hotel nearby is a treat.
In addition to being close to one of Florence’s major attractions, hotels near the Pitti Palace and Boboli Gardens have the added benefit of being on the Oltrarno – the other side of the Arno river from most of the big sights (like the Duomo and Uffizi). Although people wander over the bridges to the Oltrarno all day long, the neighborhoods on that side of the river tend to be less heavily touristed than the Duomo side. So when you find that tiny cafe or restaurant down some weird side-street near your hotel, you’re more likely to find you’ve got locals instead of other visitors for company.

Florence Hotels Near the Pitti Palace and Boboli Gardens

On the map below, you’ll see red stars marking the Pitti Palace, the Duomo, and the Piazzale Michelangelo (for reference). The blue icons indicate where the hotels listed are physically located, so you can see exactly how far away from the palace each one is. You can find out more about each hotel by clicking on the icon, or you can scroll down to read descriptions of each hotel underneath the map.

Hotels in Florence Near the Palazzo Pitti and Giardini di Boboli

Hotel Boboli
The two-star Hotel Boboli is just up the street – a few minutes’ walk – from the entrance to the Pitti Palace, and also close to the Porta Romana entrance point to Florence (handy if you’re driving through Italy). The hotel itself occupies a building that dates back to the 16th century that’s been thoroughly updated with all the modern conveniences travelers require.
The hotel has 21 rooms (twins, doubles, triples, and quadruples), all of which have a private bathroom and satellite TV. Continental breakfast is served in a common room, and the public lounge/TV room is open 24/7 (as is the reception desk). Parking is available (for a fee). Some rooms have a view over the Boboli Gardens, and there’s a small inner courtyard that can be a nice place to relax.
Villa Carlotta Hotel
Although the four-star Villa Carlotta Hotel is a bit further from the Pitti Palace and Boboli Gardens and other major sights in Florence, it’s one of those singularly beautiful and luxurious hotels that will make any visit to the city unforgettable. It’s a splurge hotel, most definitely, and perhaps just the place to book for a romantic Italy honeymoon.
The Hotel Villa Carlotta is a 19th century villa surrounded by its own gardens, and around the back of the Boboli Gardens. There are 32 rooms available (singles, doubles, triples), all of which have a private bathroom, A/C, flat screen satellite TV, and mini-bar. WiFi is free throughout the hotel, there’s an on-site restaurant, car parking is free, use of hotel bicycles is free, and breakfast is free.
Vivahotels Pitti Palace Ponte Vecchio
The three-star Vivahotels Pitti Palace Ponte Vecchio has the benefit of being close to two big attractions in Florence – and lest you be confused, the hotel has both in its name. The hotel is just a few steps from the Oltrarno end of the Ponte Vecchio, and it’s a short walk to the entrance of the Pitti Palace, too. The hotel itself dates from the 13th century, and there are two rooftop terraces atop the 7-floor building from which you can get some lovely views of Florence.
There are 87 rooms in the hotel (singles, doubles, triples, suites), all of which have a private bathroom, A/C, and satellite TV. Note that only 28 of the rooms are non-smoking, so if that’s important to you be sure to stress that in your booking. Many of the rooms have a nice view overlooking the Ponte Vecchio. WiFi is free throughout the hotel, parking in a nearby garage is available (for a fee), the hotel has an elevator, and the on-site restaurant is on the 6th floor with nice views of Florence.
Hotel Lungarno
The Hotel Lungarno is another splurge hotel in Florence, and perhaps a good option for a honeymoon in Italy or if you’re trying to impress a companion. This is another hotel that’s very close to the Ponte Vecchio (so a couple hundred meters from the Pitti Palace) and also happens to be right on the Arno River – so you get three major landmarks nearby with one hotel booking.
There are 69 rooms in the hotel (32 of which are ‘classic’), all of which have a private bathroom, satellite TV, and A/C. WiFi is free throughout the hotel, room service is available (from the on-site restaurant overlooking the Arno), and a parking garage is available (for a fee).
photo by sammydavisdog