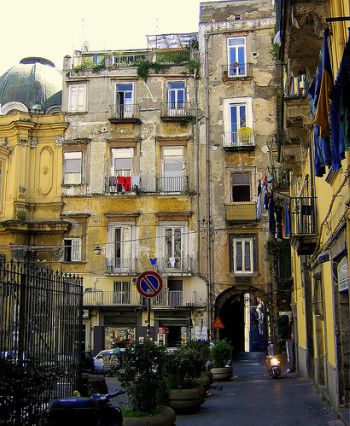 As much as I might like the city of Naples, I’m also aware that it can be a shock to the system if you’re a traveler. If you’re brave enough to include Naples on your Italy itinerary, then, it’s a good idea to make sure your hotel is going to give you a space of respite in case you need to relax a bit.
Personally, although there are several parts of Naples that have hotels that are perfectly lovely, I prefer hotels that are right in or very close to the historic center of the city. This is for a couple of reasons.
First of all, while it’s often true that the neighborhood right around a city’s main train station isn’t the best representative of the city, that’s especially true in Naples. There are quite a few budget beds to be found near the train station, but I don’t recommend staying there. You’re more likely to feel uncomfortable walking to or from your hotel at night, and if you feel trapped inside your hotel that’s not a very good way to see the city.
Second, staying right in the historic center of Naples is much cheaper than staying in the historic center of most big tourist cities in Italy. You’d be hard-pressed to find similar-quality hotels within a stone’s throw of the most popular parts of Rome, Venice, and Florence at the prices you’ll typically see in Naples. For me, it’s a treat to get a hotel room at a real budget price that’s right in the part of the city I want to be in.
Here are some Naples hotels in the historic city center – it’s not a complete list, of course, but just some of the ones you might want to consider. You’ll find the hotels marked on the map below with blue and green icons, and you can find out more about each one by clicking on it or by reading the brief descriptions underneath the map.
Don’t be confused by the different colors of the icons on the map – the green icons are often budget hotels that choose to list themselves as hostels (even though they’re not hostels). The only place that’s actually a hostel on this list is at the bottom of the post, and I’ve indicated it’s a hostel – although it does have private rooms you can book, too, so it could be a good budget option even if you’re not interested in sharing a dorm room.

Miseria e Nobiltà Bed & Breakfast
The Miseria e Nobiltà B&B is near the Via Toledo, another main street bordering the historic center, and a short walk from the Piazza del Gesù, one of the popular piazze. The B&B occupies what used to be an expansive private apartment in an 18th century building, and the owners named the B&B after a famous Italian film comedy from 1954 starring Totò and Sophie Loren – and each room is named after a character in the movie.
Because it’s a B&B, Miseria e Nobiltà is smaller than even the average small hotel, with only four rooms available. Each room has its own private bathroom, although not all of them have a shower (some have a bathtub instead). Not all rooms have air conditioning, so if that’s a must for you be sure you’re reserving one of the rooms that does have it. There’s WiFi throughout the B&B.
Caravaggio Hotel
Another hotel near the Naples Duomo is the Caravaggio Hotel, which occupies a 17th century building. The rooms have been updated to a more modern hotel style, although you won’t find anything over-the-top luxurious about the decor. It’s a 4-star hotel partly because the rooms are generally much more spacious than you’ll find in historic buildings, and the amenities are nice, but this isn’t The Ritz we’re talking about.
Each of the Caravaggio Hotel’s 18 rooms has a private bathroom, air conditioning, satellite TV, and free internet access. Some of the bathrooms have whirlpool tubs, and breakfast is available in the hotel’s dining room each morning.
Hotel Europeo
Located just around the corner from one of the pretty piazze in Naples’ historic center is the Hotel Europeo. This is a 1-star hotel, and it doesn’t have big common areas or serve breakfast – but each room has a private bathroom, heating and air conditioning, a TV and phone, and even a hair dryer in the bathroom. There are singles, doubles, triples, and quadruples available, and free WiFi throughout the hotel.
Hotel Europeo is on the 3rd and 4th floors of the building it occupies, and although the hotel’s description still says you need to pay 10¢ to use the elevator, you don’t. (I visited in June 2009 and was told they’d be updating their information to reflect the change – as yet, there’s no update, but the coin box in the elevator was inoperable when I was there, and it didn’t cost a thing to use the lift.)
Hotel des Artistes
The Hotel des Artistes is right on the Via Duomo, one of the main streets bordering what I consider to be the historic center of Naples – and as you’ll guess by the street’s name, it’s about 200 meters from the city’s main cathedral. It’s a 3-star hotel occupying a typical historic building in the city center.
The 11 rooms in the Hotel des Artistes all have a private bathroom, satellite TV, and air conditioning, and the hotel does serve a light breakfast that’s included with the price of the room. The hotel has singles, doubles, triples, and quadruple rooms available.
Hotel Neapolis
The Hotel Neapolis is right in the historic center of the city, a short walk from Naples’ fantastic archaeological museum. There’s a rooftop bar that’s nice for relaxing during the day and that becomes a bar at night, an on-site restaurant, and for anyone who’s driving to Naples the hotel has a garage and offers valet service.
It’s a 3-star hotel with 24 rooms available (singles, doubles, triples, and quadruples), all of which has its own private bathroom, air conditioning, satellite TV, and free internet access. The Hotel Neapolis serves breakfast daily in the breakfast room, often including Naples’ pastry specialties. There are two rates for the hotel – you can book a room only, or opt for the B&B rate, which includes a small fee per person for breakfast.
>> Book Hotel Neapolis in Naples
Dei Decumani Hotel
As is the case with many smaller hotels in Italy, the Dei Decumani hotel occupies a space that used to be several private apartments in an older building. This hotel is on the Via Duomo, a few steps from the city’s cathedral, in an 18th century building that’s been remodeled inside.
There are only three rooms available in the Dei Decumani hotel, which gives it more the feel of a B&B where you’ll have more personal service from the staff (the hotel calls itself a B&B, in fact). Each room has its own private bathroom, TV, and air conditioning, and breakfast is included in the price of the room.
6 Small Rooms
The 6 Small Rooms hostel and guesthouse is the one property in this article that can rightfully call itself a hostel – there are both dorm rooms (they’re bunk-free, however) and private rooms, as well as a comfortable common room with a TV and a movie library. There’s also a fully equipped kitchen so you can whip up some goodies with whatever’s on hand at the local markets.
6 Small Rooms is run by an Australian expat living in Naples for almost a decade, and although the name may give you pause most of the rooms are quite spacious. There is one private room that’s quite small, but otherwise the rooms are comfy. As this is a hostel, it’s worth noting that there’s no lock-out or curfew, and the reception desk is staffed from 08:00 until midnight. Also note there’s a resident cat, so the hostel isn’t good for anyone with allergies.
photo by JJKDC