Hotels in Rome: How to Find Where to Stay 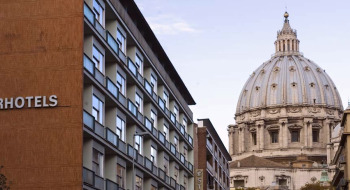 When it comes to figuring out where to stay in Rome, the trouble isn’t a lack of choice – in fact, it’s quite the opposite.
This is, as you can imagine, a hugely popular tourist city with almost no “low” season. If it seems crammed with travelers year-round, that’s because it is. It only makes sense, then, that there are so many hotels in Rome – those visitors need to stay somewhere!

The two biggest things to factor into your choice of where to stay in Rome are location and budget.

If you’re familiar with the city, you probably know a neighborhood (or two) that you want to focus on when looking for a hotel – or, even if you don’t know Rome well, you’re thinking of an attraction or monument to which you’d like to be close. This is a great way to start when looking for a hotel, especially in a city as spread out as Rome, so that your homebase is close to the things you want to do and see most.
Map of Some of the Hotels in Rome

Of course, the hotels that are closest to the biggest attractions are also often the most expensive options. Staying further from all the action means you’ll usually save money on your room, but it also means you’ll need to make sure you’re close to a bus or metro stop so you can still get around easily. There are budget accommodation options in Rome’s historic center, never fear – it’s just more likely that they’re going to be small, family-run hotels, perhaps in the 1-2 star range, and lacking many of the creature comforts you’ll find at high-end properties. For most budget travelers, however, they’re ideal – as long as it’s clean, safe, and comfortable, a small or sparsely decorated room in a building with no elevator is a small price to pay for being a short stroll from the Colosseum.

The articles linked below offer suggestions for finding hotels in Rome, whether it’s hotels in certain parts of the city, family-friendly hotels, or budget-friendly hotels. Most of these also have maps as well, so you can see exactly where each hotel is in the city in relation to monuments and attractions you’ve got on your must-see list.

For even more options in the hotel department, you can search for available Rome hotels easily right here on WhyGo Italy. Travel budget not looking as stout as you’d like? Many of the hostels in Rome have private rooms (some even with private bathrooms), which can be a great compromise.
>> Note that as of January 2011 there’s a new hotel tax in Rome – learn all about how much it adds to the cost of your room, what it pays for, and how you can avoid paying the highest tax rates.