Lake Garda is Italy’s largest lake, and as such it belongs – in part – to three separate Italian regions: Trentino-Alto Adige, Veneto, and Lombardy. Lago di Garda (as it’s known in Italian) is quite close to Verona, and about midway between Venice and Milan, so it can be a nice day trip from several major Italian cities or a holiday destination on its own.
With so much coastline, Lake Garda also has plenty of hotels offering lake views. This list of hotels with views of Lake Garda isn’t meant to cover all of them, but rather to help narrow the list to something more manageable.
These hotels are in a few different towns around the lake, and range from high-end luxury properties to more reasonable hotels. These aren’t generally going to be considered “budget hotels,” however, as getting a lake view comes with a slightly higher pricetag.

13 Lake Garda Hotels With a View 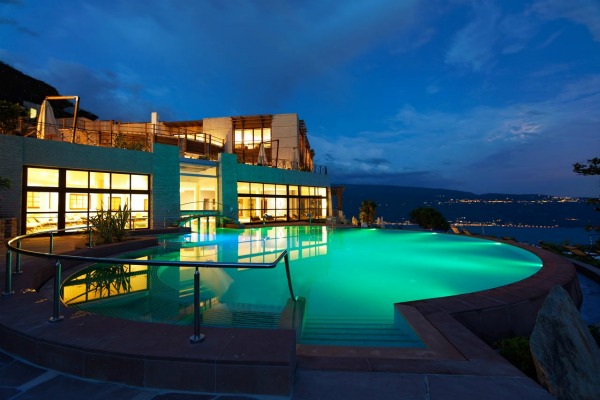 The gorgeous Lefay Resort & Spa in Gargnano sits above the town and the lake, giving guests an incredible view not only of the water but of the surrounding area. It does mean that you can’t just walk to the lake front, but when you get checked into this luxury hotel you probably won’t want to leave anyway. The on-site spa is described (by the resort) as a “temple to wellness,” and includes swimming pools in man-made grottos (among other things). The resort provides a regular shuttle into Gargnano, free valet parking for guests, a club for the kids (think luxury daycare), and both the hotel and spa were designed with sustainability in mind. 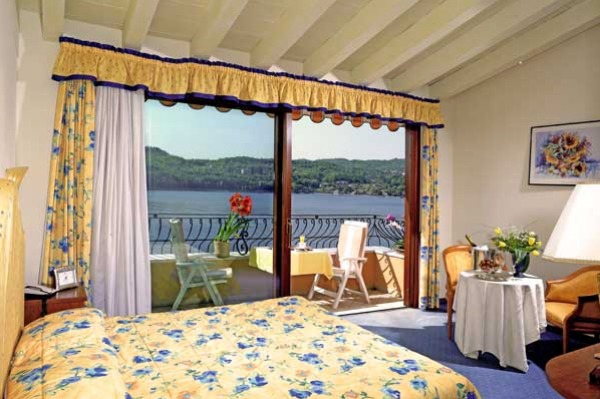 The Hotel Vigna is right in the town of Salò, and right on the water. It’s been run by the same family for three generations, celebrating its 50th anniversary in 2011. There are different levels of rooms at the hotel, and not all have a lake view – you’ll need to book one of the rooms with “Lago” in the title in order to get a view over the water. 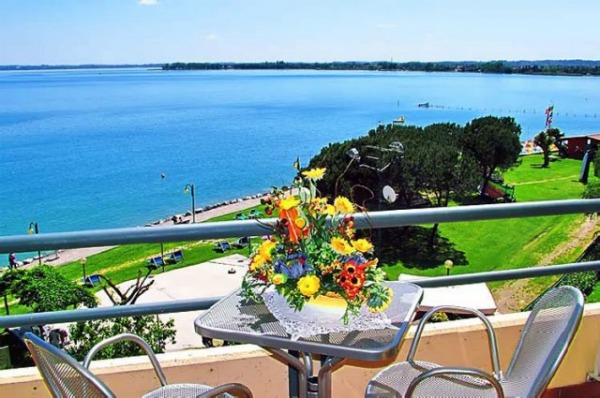 The Hotel Ca’ Serena is a small hotel right on the lake in the center of Sirmione. The town’s public beach is very close by, making it easy to go enjoy the watersports on offer there. There’s a large balcony on the front of the hotel overlooking the lake, which can be enjoyed by all guests, and many rooms also have private balconies overlooking the water.

The luxury Grand Hotel Terme overlooks not only the lake but also the castle in Sirmione. Not all rooms have views of both, but many do – including, in some cases, a terrace from which to enjoy the view. There is an on-site bar and restaurant, as well as a spa. The hotel has indoor and outdoor thermal pools, a private deck over the lake with deck chairs and umbrellas, a fully-equipped gym, and a sauna.

The Villa Sostaga is a small boutique hotel situated on a hill overlooking the lake. The property is surrounded by park and forested land, and the hotel has an on-site spa, so it’s an ideal wellness retreat. The building, a former private home, dates back to the 1800s and has only 19 rooms. Not all of the rooms have a lake view (or a balcony) – the other rooms overlook the surrounding park. 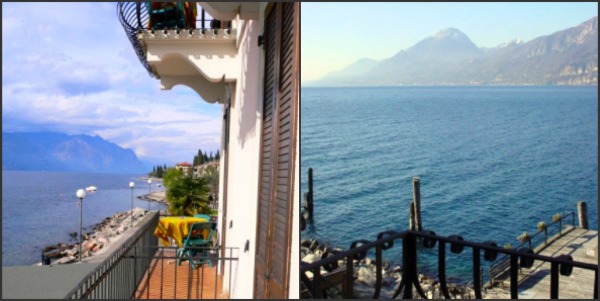 The Hotel Brenzone is a small family-run hotel right on the lake, right next to where the paddle boats dock – so it’s an easy walk from your room to rent a paddle boat for a little while. Not all rooms overlook the lake, but most that do have private balconies from which to enjoy the view. There’s an on-site restaurant, an outdoor hot tub, and the hotel provides deck chairs and umbrellas which guests can use in the garden or along the lake front.

The Hotel Baia Verde is in the town of Malcesine, on the northern end of the lake. Most rooms overlook not only the lake but also the hotel’s outdoor swimming pool and expansive lawn area. There’s an on-site spa (with a second, indoor, pool) and restaurant – and the dining room extends outdoors, too. 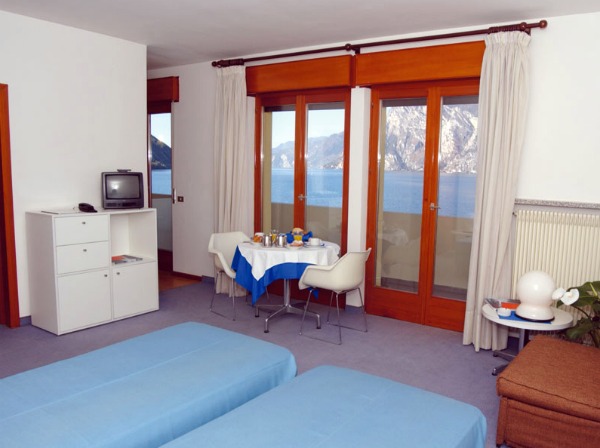 The Hotel Residence Torbole is a short walk from the Torbole town center and right on the lake. It is a hotel, but the emphasis is on apartment-style rooms designed for longer stays – including kitchenettes and sitting areas. Most rooms have a lake view and a balcony, and the hotel has an on-site children’s playground. This kind of arrangement can be ideal for traveling families. 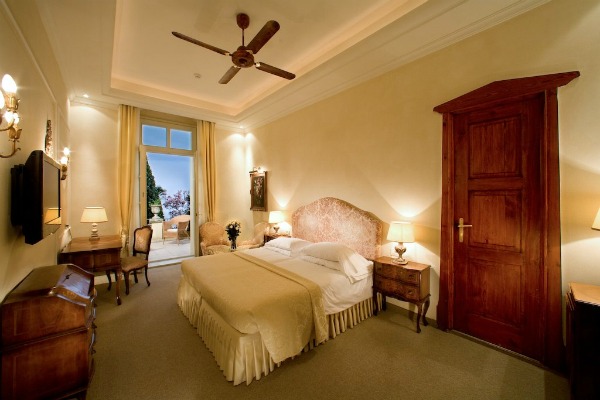 The Grand Hotel Fasano is a spa hotel with a well-equipped on-site wellness center and a golf course nearby. The property is right on Lake Garda, and the hotel is surrounded by a private park. Not all rooms have a lake view, but most of the rooms overlooking the lake have private balconies as well. The spa is an Aveda Destination Spa, and facilities include a sauna, indoor and outdoor pools, and Turkish baths. 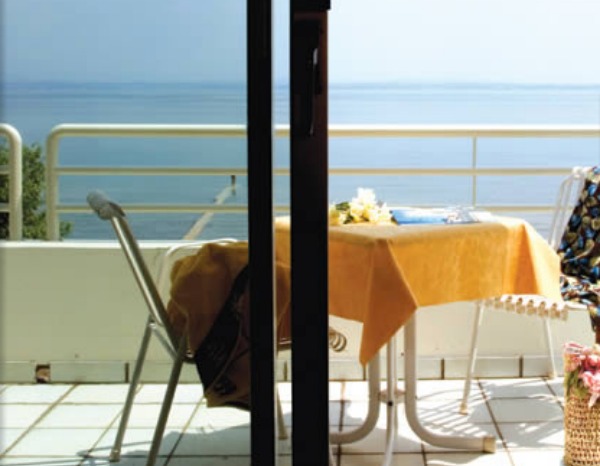 The Hotel Astra is a beautiful boutique hotel in the center of Sirmione, a small town on a spindly peninsula that juts into the lake at its southern end. The hotel is in the center of town, and only a few of its rooms have a lake view, but it’s a short walk to the water in just about any direction. There are 36 rooms at the hotel, and on-site facilities include a spa and a restaurant. 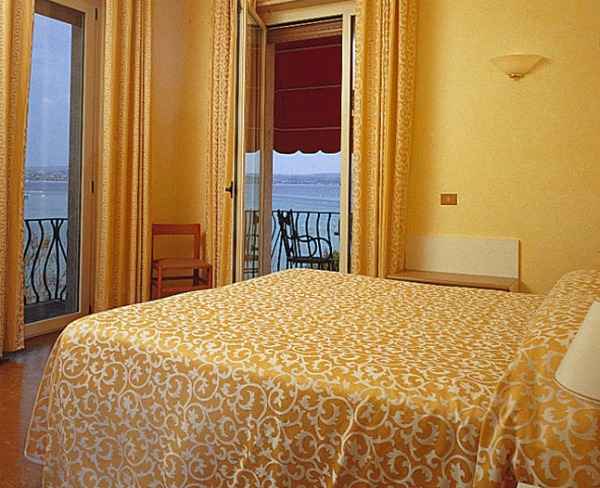 The Hotel Marconi is in the center of Sirmione and just a short walk from the lakefront. Many rooms have views of the water, as does the breakfast room. There are two buildings that make up the hotel, and every room has either a balcony or a small terrace, but not all of them have a lake view. 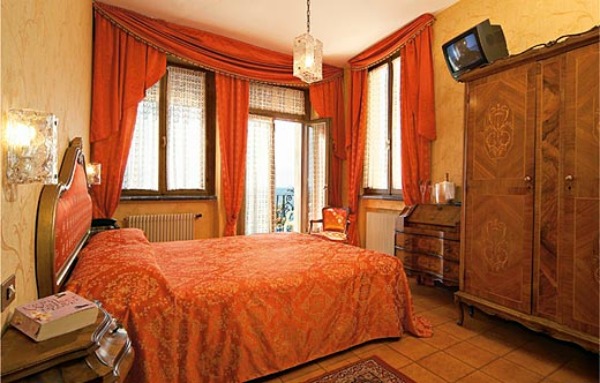 The Hotel Le Palme is a small hotel right on Lake Garda. The on-site restaurant not only overlooks the lake, it’s essentially on a dock in front of the hotel. The hotel is also right in the town, so everything is within easy reach. Most of the rooms in the hotel have a lake view, and some have a balcony as well. 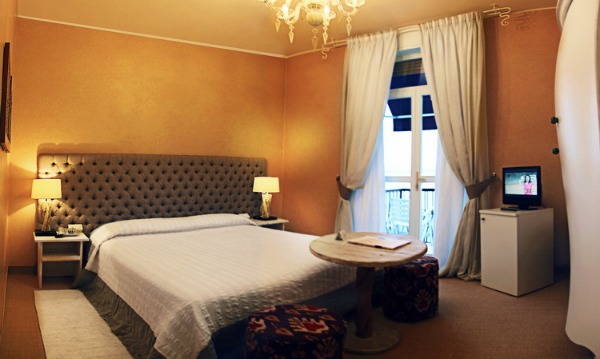 The Hotel Flaminia is in the center of Sirmione, and this one is right on the water. Not all rooms have a lake view, but most that do have a balcony from which to enjoy the view. In front of the hotel, there’s a pretty private deck right on the lake that’s furnished with deck chairs and umbrellas. Parking is included at the hotel, as is a buffet-style breakfast.