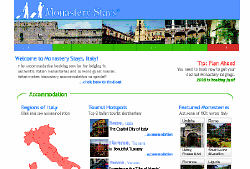 An Italy Logue reader recently sent me a note drawing my attention to a website that I thought I’d pass along to everyone. I’ve talked before about the budget beds which can be found in many of the monasteries and convents in Italy which have opened their doors to modern-day travelers, and I’ve also mentioned the challenge of locating websites (or even contact information) for these convents and monasteries. The best resource I knew of before was a book called “Bed and Blessings,” which unfortunately appears to be out of print – and was last printed in 1999, making the possibility that some of its information is out of date much more likely.

Enter reader Aussie John, who says that while the “Bed and Blessings” book is out of print, the website Monastery Stays is definitely not. This website lets you browse the listings and book a stay in lots of monasteries and convents throughout Italy. It’s incredibly convenient and easy to use, and reportedly has more than 270 convents and monasteries in its database. The properties must meet certain standards, and the website says they’ll only include a property in its listings “only where we have assessed the accommodation as 3 star or better … with private facilities and spotlessly clean.”

Monastery Stays serves as the middle-man between you, the traveler, and the monasteries and convents in Italy – they’ll take care of answering your questions so you don’t have to worry about contacting the monastery or convent yourself (or worry about speaking any Italian!). This lets everyone have access to a more unique experience than if they just settled for one of the cookie-cutter hotels in Italy.

To begin searching for a monastery or convent in Italy to stay in, just click on the Italy map near the top of the page to choose the region you’re interested in staying in. You can choose a more specific location on the next page from the list of Italy convents and monasteries in that region.

As an aside, while I was poking around online to write this post, I also found a newer book about Italy’s monasteries, called “The Guide to Lodging in Italy’s Monasteries” – it appears to have been published in 2006. So, if you’re more of a book person and you either can’t find “Bed and Blessings” or you want something more current, you might check this one out instead.