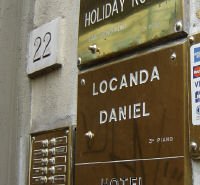 For budget travelers who have graduated from big hostel dorm rooms but haven’t yet quite reached the budget hotel stage, Italy has plenty of options. Many are called things like “residenza,” “locanda” and “soggiorno,” and most Italian towns have several in this category. I visited one in Florence called Locanda Daniel which is very small (only five rooms!), and could be a great option for budget travelers who still want a little bit of charm in the heart of the city.

Locanda Daniel is on the busy Via Nazionale not far from the San Lorenzo church and the leather market along Via dell’Ariento. The street itself is noisy, but the double-paned windows on the street side block out the noise so it’s peaceful inside the locanda. With only five rooms, we’re not talking about a big place here – it’s basically one hallway with doors opening onto rooms along one side. All but one of the bedrooms has windows that open onto Via Nazionale, with the remaining bedroom (a double) having the only view of the dome on the Florence Duomo. (Unfortunately, it was occupied when I visited, so I didn’t get to see it.)

You won’t get breakfast with your stay at Locanda Daniel, but there are plenty of places not far from the front door where you can get a traditional Italian breakfast (coffee and a pastry) to start your day. When you check into the locanda, ask for their neighborhood map – it’s not a great city map, but it’ll show you the location of some of the area sights as well as the nearest grocery store, laundromat, phone center, and banks as they relate to Locanda Daniel. So if the usual coffee and croissant isn’t enough to get you going in the morning, swing by the grocery store or the market to pick up some yogurt or fruit – there’s a mini-fridge in the small common room where you can store a few things during your stay. 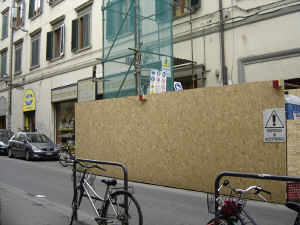 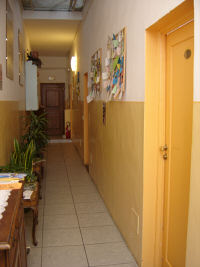 L-R: Front of Via Nazionale 22 (They were doing some work on the roof of the Locanda Daniel building when I visited, so it was a little tough to find! If the scaffolding isn’t there when you arrive, you’ll be able to see the number 22 on the front of the building easier. It’s next door to “Fonte dei Dolci,” a sweets shop.); hallway of Locanda Daniel

None of the bedrooms have a bathroom in them, but the bathrooms are new and kept clean. There are two bathrooms for the five rooms, some of which are air-conditioned. When I visited, I think my Italian was better than the English of the woman who was showing me around (or at least she thought so!), but if you don’t speak Italian you can certainly get by on basic English with whoever is on duty when you check in. 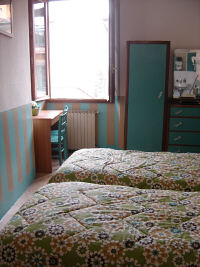 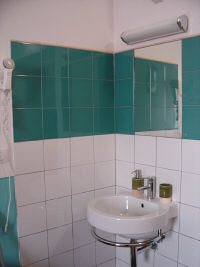 Locanda Daniel is a quiet and comfortable space to call your own during your stay in Florence – you’ll be close to the sights and yet have a little haven away from the hullabaloo of Duomo Square whenever you want it.

Location: Via Nazionale 22 (black) 50123 Florence (numbers in Florence are sometimes referred to as “black” or “red” numbers; the red is almost invisible now, and the black numbers look blue – just know that the two sets have completely unrelated sequences as you walk down the street looking for numbers)
Contact Information: tel: +39 055 211 293
Common Areas: There aren’t really common areas where you’d hang out, but there is a small side room with a mini-fridge, microwave, coffee machine and washing machine (there are hanging racks for drying laundry), as well as another nook with a computer that’s available for guest use (with free internet).
Rooms: Five bedrooms (single, double, triple options); no en-suite bathrooms, wash basins in the rooms
Curfew/Lockout: No curfew, no lockout – you have keys to the front door, so you can always come and go as you please
Check-in/Check-out: Check-in is between 08:30 and 13:30; arrivals outside this time must notify the staff via phone or email after booking, or there won’t be anyone there to let you in. There is no check-in after 20:00, however!
Safety: The locanda is on a busy (but safe) street, and the front door is locked at all times – so it’s very safe and cozy feeling.
Fun Factor: This is definitely not the place to stay if you’re still into pub crawls or want to hang out in the hostel bar until the wee hours. The fun you’ll have is outside the locanda.
Freebies: internet, bed linens, towels, alarm clock, luggage storage (unattended), hair dryer provided
Extras You’ve Got to Pay For: N/A
Good to Know: The locanda is on the 3rd floor, and there is no elevator.
Payment Accepted: major credit cards, cash
Booking: Locanda Daniel booking