As I’ve mentioned, there are a ton of budget hotels and hostels around the Roma Termini train station – and on my most recent visit to Rome, I checked out many of them. I could only stay in one, however (well, I suppose I could have stayed in a different place each night, but what a huge pain in the arse that would have been – and I’m basically lazy), and that was M&J Place Hostel.

M&J Place is located a few steps from Termini on the northeast side of the station on Via Solferino. The hostel has been in existence (and in the exact same location) for nearly 15 years, and is enthusiastically run by Mario (yes, that’s the M of M&J). If he’s anywhere near the front desk when you check in and your native language isn’t Italian, he’ll probably be able to chit-chat with you a little in your native tongue. I never asked him how many languages he speaks, but I’d be surprised if it wasn’t at least five or six…

At any rate, I stayed in a single private room at M&J Hostel for four nights, and every day as I came and went from the hostel and passed by the front desk, there were new people checking in or inquiring about rooms. It was easily the busiest hostel I visited during my stay in Rome, and Mario told me that many of the people who come to M&J do so without reservations. So while you can always take a chance on finding an available bed at M&J, if you know this is the place you want to stay you’d be better off reserving a bed in advance – especially during the high season.

>>Check out my other Rome hostels reviews, too! 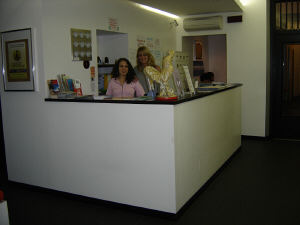 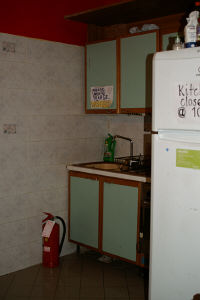 L-R: Two of the friendly people working the front desk at M&J; the community kitchen

The front desk (and the hostel’s front door) are open 24-hours, with no lockout or curfew, and the staff at the front desk is unfailingly polite and helpful. The two gals I saw the most of were both Dutch, but there’s an array of nationalities that work behind the desk and most of them speak English fluently along with at least one (if not two) other languages. 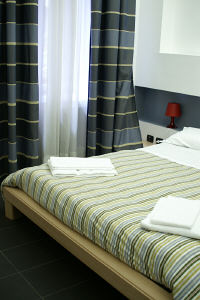 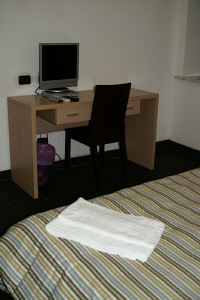 One door down from the hostel’s front door is the Living Room, which is a bar/restaurant/cafe that’s also run by M&J. If you’re staying at the hostel you can get a discount on meals, and it’s also where you’ll go to get the free breakfast that’s included with your stay and the free drink that you can take advantage of each night. The breakfast buffet includes cereal, milk, juice, toast, jam, pastries, and a coffee drink of your choice. It’s an ample amount of food to get you started on your day in Rome, so take advantage of it. And then you can start your night in Rome at the Living Room as well with a free drink before going on the M&J pub crawl or just heading out for your own night on the town. 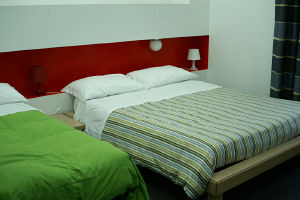 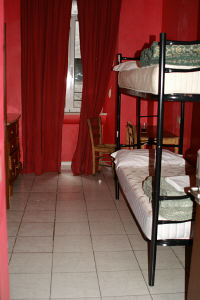 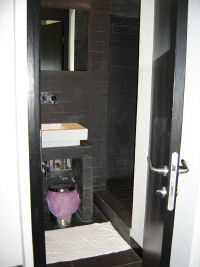 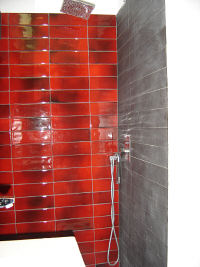 Aside from my room being in a relatively noisy location (read more about that below), I had a great stay at M&J Place and would recommend it to other travelers. I think it’s especially well-suited to people who are as interested in meeting other travelers as they are to their actual travels; the dorms were all full while I was there – which is where there aren’t any photos of the dorms – they were full of peoples’ stuff! 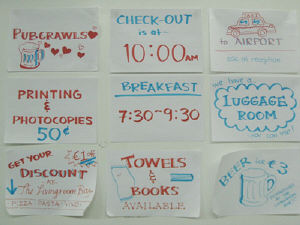 The “house rules” are posted behind the front desk

Location: Via Solferino 9, 00185 Rome – a two-minute walk from Roma Termini
Contact Information: tel: +39 064 462 802
Common Areas: TV nook off of reception & couple of cushioned benches in the reception area (both of these areas have electrical outlets & plugs to connect your laptop to the internet), internet nook with two computers for free use by guests, small kitchen down the hall from reception; all clean, well-maintained and popular
Dorms: The largest dorm sleeps 10 people; some have en suite bathrooms, others make use of shared bathrooms in the hall.
Private Rooms: The smallest room sleeps 1 person; there are two triples which are side by side and have a door which can open between them; can be rented separately or together for a family or group of 4-6 people; all the private rooms are right off the reception area, which can get noisy since it’s open 24/7 and since it’s such a popular hostel, so bring earplugs or some kind of noise machine to help block out the chatter from the front desk.
Curfew/Lockout: No curfew, no lockout
Check-in/Check-out: Check-in is after 14:00, check-out is at 10:00
Safety: I felt totally safe in and around the hostel; keys to the rooms are key-cards which you keep (you don’t turn them in at the front desk, but don’t lose them or you’ll be charged €10), and there are lockers available for your stuff while you’re out and about. The private rooms have in-rooms safe boxes. The luggage storage is near the front desk, which always has someone at it.
Fun Factor: The reception area was almost always buzzing, the dorms were all full, and there were crews organizing outings most days and nights. It’s a great hostel to stay in if you’re looking to meet other travelers. There’s also a pub crawl!
Freebies: breakfast, one drink at night, sheets, lockers, internet access, baggage storage, satellite TV in private rooms and common room
Extras You’ve Got to Pay For: towel – though you can buy one for €5 if you didn’t bring your own (this only applies to dorms; in the private rooms you get a towel provided for you)
Transportation Options: It’s right next to Termini, so there’s a Metro stop and a big bus stop area (lots of Rome’s bus lines stop there) a short walk from the hostel’s front door.
Good to Know:
The single I was in was located more or less over the Living Room downstairs, which turns into a club in the evening, and I fell asleep three of the four nights to thumping bass coming up through the floor that no noise machine could drown out. If you’re a light sleeper, this could be a real issue, so ask for a quieter room.
There’s an elevator in the building, but it’s not for use by the hostel, so you’ve got to schlep your bags up the stairs. Reception is only on the 2nd floor (called the 1st floor in Italy), but most of the rooms are up more flights of stairs.
M&J was recently included in Lonely Planet’s Italy guidebook for the first time, which will only serve to make it more popular and tougher to book if you’re just showing up without a reservation.
Groups over 20 must call in order to book beds; booking through the internet may not work for such large groups.
Payment Accepted: cash upon arrival
Booking: M&J Place Hostel booking