Full Disclosure & Whatnot: Just so y’know, my stay at Hotel Il Convento was offered free by the hotel. My opinions are my own.
You may know I’m quite a fan of Twitter – so it probably won’t surprise you to know that I was particularly excited about one hotel I stayed in during my last Italy trip because I’d found out about them on Twitter. The fact that the hotel turned out to be great was an added bonus.
Not long before I left for Italy, I noticed that a new Twitter account called @hotelilconvento was following me, and since it was in Italian I clicked on it. Turned out it was a hotel – Hotel il Convento – in the Spanish quarter of Naples a couple blocks off of the busy Via Toledo housed in a 17th century palazzo right next to the historic convent of Santa Maria Francesca. The hotel itself isn’t a former convent, but they’ve tried to be evocative of old convents in some of the decor – dark wooden beams and arched doorways. The look is clean, but not so severe as to be uncomfortable. 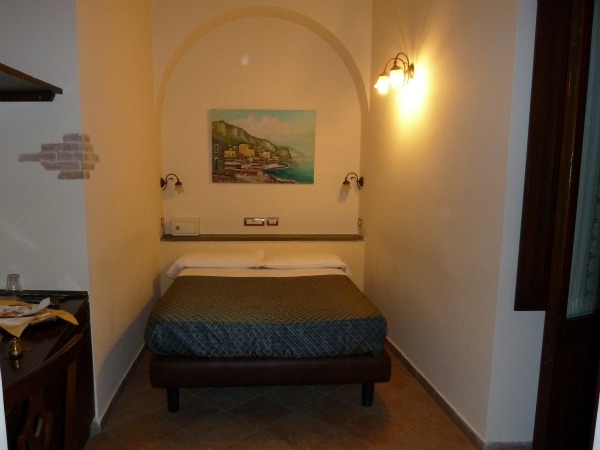 The location of the Hotel il Convento is just about ideal as far as I’m concerned – Naples can be a complicated city to love, and even a difficult city to visit. In my opinion it’s imperative to get away from the train station when selecting a hotel so that you’re closer to the historic center – and the Hotel il Convento is right in the historic center. It’s within walking distance of the famous Spaccanapoli, the amazing Archaeological Museum, and even the port from which you can get boats to Sorrento, the Amalfi Coast, and the islands. The hotel isn’t far from a bus stop that will connect you to the train station, but you can also get a taxi for roughly €10-13 one-way. 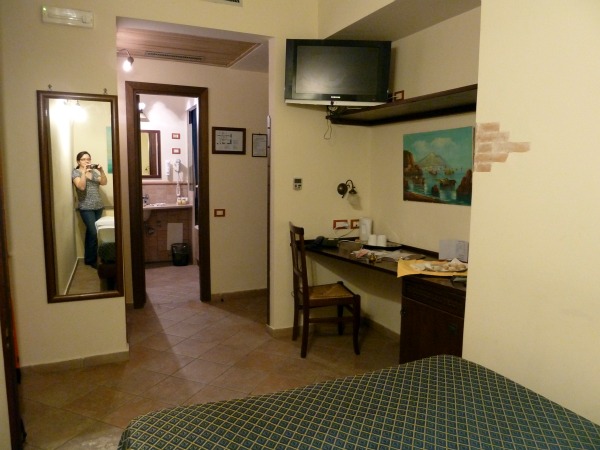 Hotel il Convento is small (only 14 rooms) and staffed by some of the friendliest and most helpful people I’ve ever seen at a hotel. Each person I met at the front desk spoke excellent English, and every time I walked through the lobby they were giving detailed planning assistance to a hotel guest (including passing on tips for favorite pizza places). There’s an extensive breakfast spread in the “refectory” each morning, a cozy bar off the lobby, and WiFi available throughout the hotel. 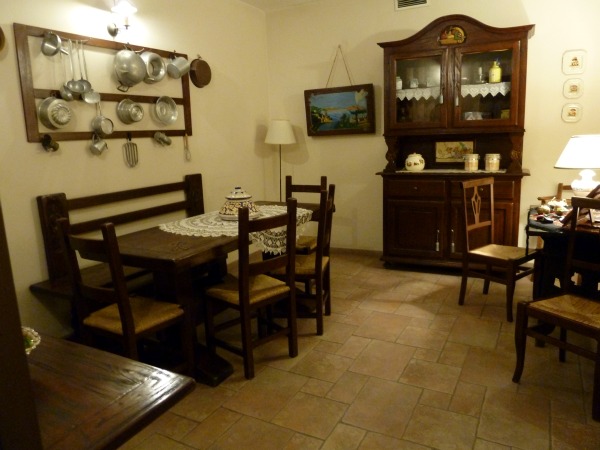 The hotel is making a commendable effort to be eco-friendly – each bathroom has a more efficient shower-head, large liquid soap dispensers instead of tiny plastic bottles, and towels aren’t replaced if they’re hung to dry. The room I had was lacking in towel racks, so I ended up hanging some towels on clothes hangers – less than ideal, but not the end of the world – and the hotel cleaning staff honored their eco-pledge by not replacing them even though they weren’t hung in what might otherwise be considered a normal way. (To me, this was a very good thing, having stayed in some Italian hotels lately that had signs proclaiming eco-conscious measures which were then promptly ignored.) 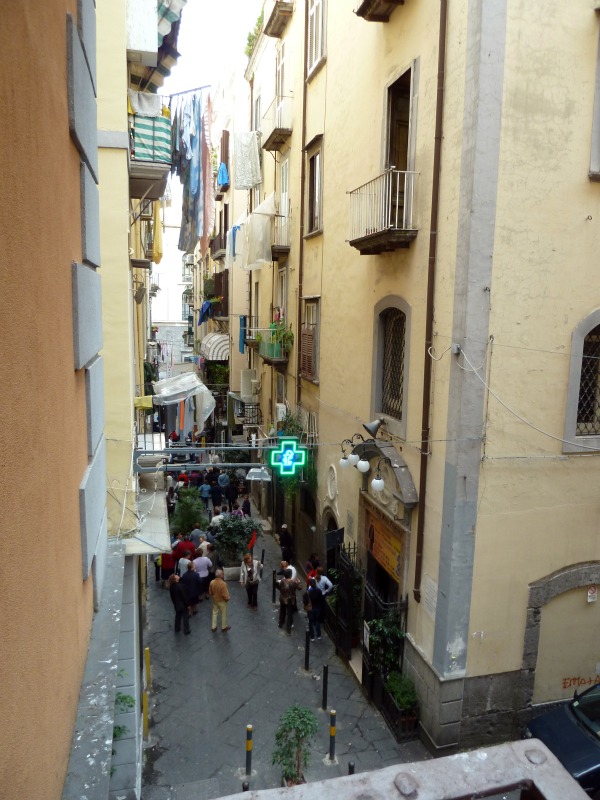 The one thing about Hotel il Convento that could be problematic for some people isn’t something in the hotel itself – it’s the bells of the church next door. They begin chiming at 7am, and the sound-proof windows in my room weren’t enough to keep out the noise. My room was facing the church, so I can’t say whether a room on the opposite side of the hotel would be better for people who prefer to sleep in, but if you’re concerned about it be sure to ask for a room away from the church bells. There were earplugs provided in the room, so the staff obviously knows this is an issue.
My stay at Hotel il Convento was so pleasant that when I needed a Naples hotel for one night at the end of my trip before an early flight out of the Naples Airport, I contacted them again – using Twitter, since that’s how I’d connected with them in the first place – but sadly, they were all booked up.
I’d happily stay in the Hotel il Convento again on a future visit, and it’s not just because they’ve so firmly embraced social media (although that doesn’t hurt when you’re talking to internet-obsessed travelers like me). I just might ask for a room on the other side of the building next time.
>> Learn more about the Hotel il Convento on their official website, follow them on Twitter, and check out their Facebook page.
all photographs by Jessica Spiegel and may not be used without permission; the photographs are of the room I stayed in (one is even a semi-self portrait!), the “refectory” breakfast room, and the view from my balcony