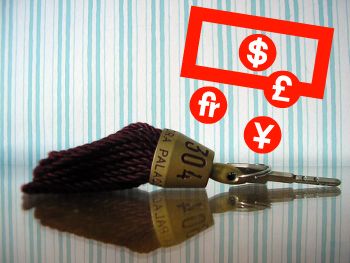 In January 2011, Rome introduced a new tax on accommodation, amounting to €1-3 per person per night, depending on the type of accommodation. Not to be outdone, the cities of Florence and Venice have rushed to implement similar taxes, which will take effect on July 1, 2011.
>> Thanks to @crosspoll on Twitter for alerting me to this news
Florence was first to announce plans for a hotel tax, although earlier in 2011 they reportedly said it would start in 2012. In late May, city officials changed their tune, saying it could begin as early as July 1. By mid-June, the July start date was a certainty.
Following closely on Florence’s heels, at a mid-June meeting of Veneto regional mayors approved a hotel tax for the city of Venice that is also set to begin on July 1. [See update below]
>> UPDATE: Evidently the Venice tax vote was delayed after the tax proposal generated protest from city officials. As a result, the new tax won’t take effect on July 1 – at the earliest, it’s likely to begin in late August. [Thanks to @WalksofItaly on Twitter for alerting me to this news]
The details of the hotel taxes in Florence and Venice are still being worked out, but it’s likely that there will be a cap on the number of nights a visitor can be taxed (probably five nights total) and also that children under the age of 10 won’t be taxed at all.
Rome’s hotel tax is a bit more complex than the ones set to start in Florence and Venice. In the latter two cities, the tax is €1 per person and per hotel star. In other words, a couple staying at a 4-star hotel for two nights in either Florence or Venice would pay an additional €32 for their stay.
Some reports indicate that Venice is likely to lower the tax rate during the low season (November-February), and that hotels below 4- and 5-stars that are on the mainland or the smaller islands in the Venetian lagoon will be able to charge a lower tax rate as well.
In the grand scheme of things, adding a few euro per person per night to an Italy trip that costs a few hundred euro could seem like a small thing. Many tourists will likely not even notice the difference. Questions about what the money will be used for, however, have yet to be answered in either Florence or Venice. In Rome, city officials say the money collected from their hotel tax will go toward repairing and restoring the famous Roman monuments and attractions that draw tourists in the first place. It’s too early to tell whether the money is actually going toward what Rome’s city council said it would, of course.
The long-term impact of these hotel taxes in Italy’s most popular cities remains to be seen, but it’s definitely something to be aware of when you’re making up your Italy budget.
More information:

photo by @rgs (added graphic by me)