Full Disclosure & Whatnot: Just so y’know, my stay at Via Butera was partially covered by HomeAway, partially comp’d by Via Butera, and partially paid for by me. My opinions are my own.
On my recent trip to Palermo, I stayed in an apartment in the historic center of Palermo. The address of the apartment is also the name of the building, which happens to be an historic palazzo tied to one of Italy’s most cherished literary works – but more on that in a bit.
Via Butera 28 is located only one street in from Palermo’s waterfront on one edge of the historic center of the city. This means it’s not only a great spot from which to explore the city without the need for a rental car, it’s also possible to book an apartment with expansive views of the sea. Views on the opposite side of the building aren’t bad, either, as they overlook the historic city and the surrounding hills; and some apartments overlook a private internal courtyard. 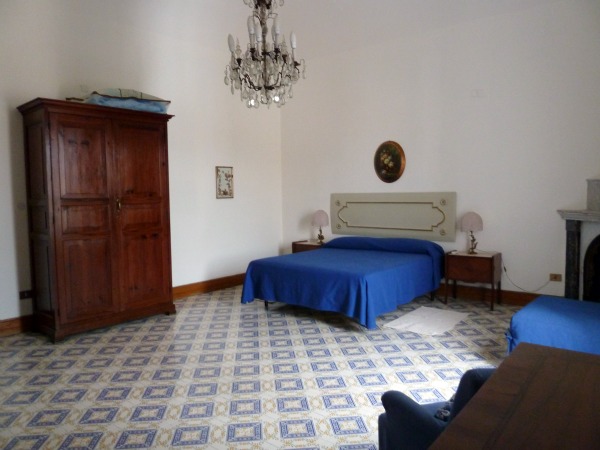 The palazzo is across the street from a 4-star hotel, a 10-15 minute walk from the famous Quattro Canti intersection and other major attractions of the city center, and steps from the seafront. If your Palermo plans include primarily visiting the city itself, the location is excellent. If you have day trips from Palermo in mind, it’s still a great home base – you’ll just have to figure out parking in the crowded city center. 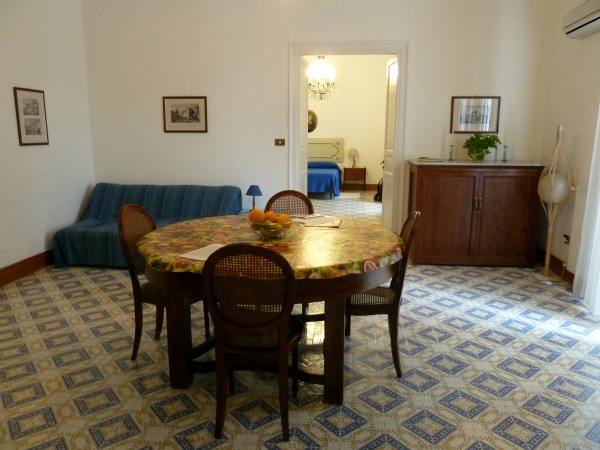 The apartments are completely furnished with cheery decor, and well-equipped for short- or long-term stays. Each bathroom has a hairdryer, each kitchen has all the necessary implements you’ll need to create a feast with whatever you found at one of Palermo’s incredible daily markets. And for inspiration on what to whip up in your apartment, you need look no further than the proprietress of Via Butera 28, Nicoletta. 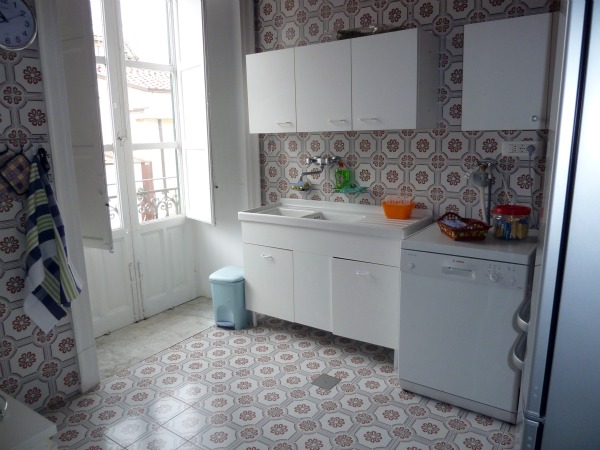 In addition to running the apartments at Via Butera 28, Nicoletta also runs a cooking school in her home (in the same palazzo) – Cooking with the Duchess – where she brings Sicilian cooking to small groups of students who also get to hang out for a day in a 17th century palazzo. 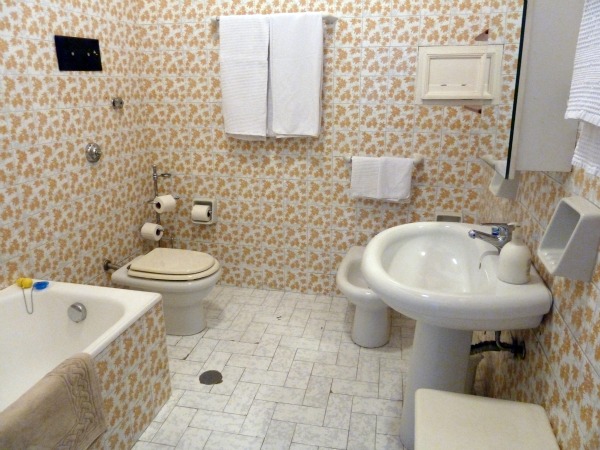 The palazzo itself is remarkable – it would be historic enough on its own, but it becomes even more interesting to Italians and anyone who appreciates Italian literature because of one particular resident: Giuseppe Tomasi of Lampedusa. Tomasi is the author of “The Leopard,” and his family has owned the palazzo since 1849. Via Butera 28 was Tomasi’s final residence, and although it is now mostly divided up into individual apartments, there’s a huge section that remains decorated much as it might have been when Tomasi lived there. In fact, one room – appropriately enough a library – is exactly as it was when Tomasi died.
All of these things would be enough to make staying at Via Butera 28 a good choice for anyone interested in a unique accommodation option (and especially anyone staying for more than a few days, or traveling in a family or a group where having a kitchen is a major perk), but in my experience it’s the wealth of information that Nicoletta herself is able to provide visitors to Palermo that makes a stay at Via Butera 28 even better.
It’s like you booked a stay at the Palermo tourist information office, with more comfortable beds.
When you first check into your Via Butera 28 apartment and Nicoletta unfolds the map of Palermo she keeps in every apartment, I strongly advise you to have a pen and notebook ready. Nicoletta’s English is exceptional (she also speaks German quite well, and mentioned something about having studied in Russia in her youth, so it’s possible she still speaks Russian, too), her knowledge of Palermo is encyclopedic, and she’ll move quickly from attraction to attraction on the map. Pay attention when she talks about the artistic treasures of the city, and ask her about the stucco sculptures in several churches (they look like marble – you’d never know they weren’t). Read her recommendations for places to eat (each apartment also has a detailed list of restaurants and helpful tourist information), but even though she turns up her nose at it I’d still say you should try milza at least once.
In short, allow Nicoletta’s passion for the city of Palermo get under your skin so that you, too, can speak wistfully of it when you return from your trip.
>> Learn more about Via Butera 28 at the official website or read about one apartment listed on HomeAway, and read the apartment reviews on TripAdvisor
>> Learn about things to do in Palermo when you go
all photographs by Jessica Spiegel and may not be used without permission; these photographs are of the apartment in which I stayed – visit the official Via Butera 28 site for photos of all the apartments