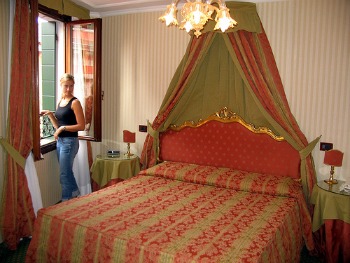 Booking a hotel in Italy can feel a bit like shooting blindly, especially when it’s your first trip and you have no idea what you’re looking for.
It’s easy, then, to gravitate toward something that looks familiar – something you think makes sense, and that you can compare properties by.
A star system seems promising, but as you’ll see it can be confusing.
Here’s what you need to know about the Italy hotel star system.

How many stars are in Italy’s hotel rating system?

As is the case in the United States and many other countries, Italy has a hotel rating system that ranges from 1-5 stars.

Is Italy’s hotel star system the same as in other countries?

No – this is a critical point, and a common misconception. You see stars, you see the same number of stars in the range, and you think it’s the same system. It’s not.

Okay, what are the stars in Italy’s hotel classification system based on, then?

In Italy, as in some other European countries, the number of stars a property has is designated by the government of that country. There’s a checklist that each hotel is put through and then a final score is produced that determines how many stars that hotel has. Things like the size of the lobby, the proximity of the lobby to guest rooms, and whether there’s an elevator in the building can be the deciding factors in whether a hotel is a 2-star or 3-star property.
If you’re raising an eyebrow and wondering what these stars have to do with the rooms themselves, you’re not alone. Things like whether the rooms have private bathrooms and even how many towels are provided will be counted toward that hotel’s number of stars, but there’s no method for scoring “cute” or “quaint” or “pretty” or anything remotely subjective.
To make matters even more complicated, the star system is only partly national – some of the regulations are regional, meaning a 3-star hotel in Venice might not have to meet the same criteria as a 3-star hotel in the Cinque Terre. They’ll be close, mind you, but they’re not working off of the same checklist.

What can be expected at different star levels?

This isn’t a comprehensive list, but here are a few common hotel amenities, and what star levels of hotels are supposed to have them in Italy:

Does this mean we should ignore the stars on Italy hotels?

No, you shouldn’t ignore them – but you also shouldn’t rely solely on them. When you’re searching for hotels in Italy, keep these things in mind along with how many stars a property has: