What to Expect from Italian Hotel Rooms

People traveling to Italy from another country are usually aware they have to prepare themselves for a few differences – different language, different currency, etc. Hotel rooms, on the other hand, are cookie-cutter boxes that are the same everywhere – right?

It’s not about better or worse, it’s about knowing what to expect when you check into a hotel in Italy. Even if you’re staying in hotels that are part of chains you recognize – Hilton, Best Western, Marriott – the rooms are likely to be more Italian and less chain-like. Comparing your Italian hotel room with a room in another country isn’t going to get you very far, so instead, here are a few tips about what to expect from Italian hotels so that you don’t have any unwelcome surprises. 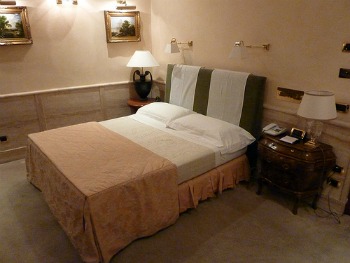 In historic city centers, the buildings have been there much longer than the hotels – so any hotel occupying an historic building has limitations to what they can do to the structure, even on the inside. Many of the historic buildings that are now hotels were once private homes, so they may already have been broken up into usable “hotel room” sized rooms, but there certainly weren’t bathrooms in every room back then.

Putting en suite bathrooms into already not-very-large bedrooms means cutting into bedroom space, so don’t be surprised if the rooms and bathrooms are quite small. New construction doesn’t have this sort of limitation, so hotels outside the city centers (such as hotels by airports or in the suburbs) tend to be more akin to the rooms you might expect. 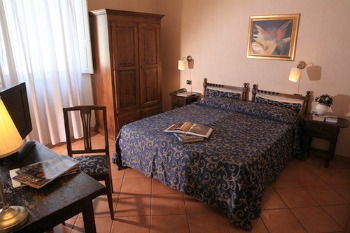 In order to make every hotel room more versatile, hoteliers often put two twin beds in a room and then push them together if the guest has booked a “matrimonial” bed. You may not notice the difference when you check in, since there’s a large bedspread covering both beds, but when you pull the covers back that night you may find two twin beds made up underneath.

Generally speaking, the beds are sturdy enough that you don’t risk falling into a chasm in the middle of the night, but it’s good to be aware of – especially if you’re traveling as a couple and you’re used to cuddling together in the middle of the bed. You might have to pick sides this time. 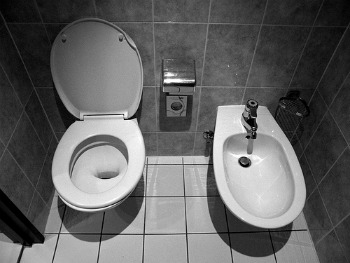 Aside from the small size of the overall room, it’s in the bathroom that most surprises occur. These are the main things to be aware of when you’re inspecting your hotel bathroom.