Search here for great deals on cheap airfare to Milan 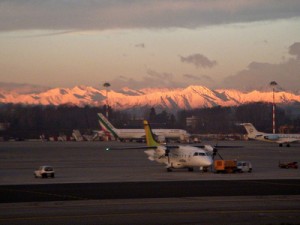 Even though most tourists visiting Italy don’t plan to spend any time in Milan, it’s the second most popular city to fly in and out of. It’s easy to understand why this is the case, because Milan Malpensa is a major international airport with connections all over the world. But that doesn’t mean that finding a good deal on airfare to Milan is easy – airfare deals to any airport in Italy can be a real challenge to find, and Milan is no exception.

Two Airports in Milan (or is it Three?)

Milan does have two airports, however, so that gives you at least a little more flexibility when hunting for airfare deals. In addition to the major airport of Malpensa, there is a smaller airport that is actually closer to central Milan called Milan Linate. While you will find bigger airlines serving Linate, it is principally most popular with smaller and low-cost airlines. It’s unlikely that you’ll be able to fly directly into Linate from points overseas, but if you’ve got a layover elsewhere in Europe flying into Linate is extremely convenient – it takes far less time to get into central Milan from Linate, which means if you’re taking a taxi you’re not going to pay as dearly as you would for a ride from Malpensa.

(In fact, it’s really not recommended to take a taxi to or from Malpensa, unless someone else is footing the bill – it’s much too costly, and there are other options for transport, including the Malpensa Express train and even a Malpensa shuttle bus. But that’s another subject altogether. In fact, it’s a subject I covered in a post about how to get from Malpensa Airport to Milan.)

Depending on your ultimate destination, you might even consider flying into what is loosely considered Milan’s third airport – Orio al Serio Airport in nearby Bergamo. It’s a much smaller airport even than Linate, although it has a similar list of low-cost airlines which serve it. For those of you who are contemplating flying into Milan but aren’t actually planning to spend any time in the city, this could be a good alternative.

How to Find Cheap Airfare to Milan

No matter which airport you choose, getting a good deal on airfare to Milan can be tricky. The national flag carrier, Alitalia, calls Malpensa a hub – but Alitalia has been in financial difficulties for years, so tickets on the national airline aren’t exactly a bargain these days. You’ll have more choices flying into Malpensa, but more budget airlines serve Linate. It pays to shop around for airfare to Milan well in advance of your trip so you’ll know when ticket prices are going up or down and act accordingly. Here are a couple more tips for finding cheap airfare to Milan:

>> Now that you’re in Italy’s fashion and banking capital, here are some budget hotels in Milan and the top 10 things to do in Milan!