Search here for great deals on cheap airfare to Venice 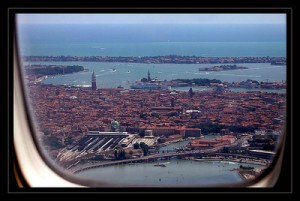 While countless people make the trek to Venice every year to soak in the fantastical beauty of the lagoon city, precious few fly in and out of Venice’s very efficient and small airport. In fact, there are plenty of people who don’t even realize the city has its own airport – where, they think, could they put it? Well, it’s on the mainland, but it’s just a short boat ride away from the Grand Canal. You might spend a little more on airfare to Venice than you might for other Italian cities, but I think it’s worth it.

Yes, Venice Has an Airport – but Not on the Islands!

Venice’s Marco Polo International Airport is smaller than the international airports in Milan and Rome, so it’s just quicker to get through things like customs and the baggage claim area. You aren’t going to find the same level of shopping or dining options that exist at bigger airports, but for most travelers this isn’t going to be an issue. If your focus is more on convenience, Marco Polo Airport’s got that in spades.

The only downside to flying directly into Venice from overseas is that the cost might be a little higher than flying into Milan or Rome, mainly because those larger airports have busier schedules and more options. But if you plan ahead and keep an eye on airfare to Venice well in advance of your trip, you should be able to find something that is comparable to those other cities. And have I mentioned that it’s not far from the Grand Canal? In Venice?

One great way to get a better deal on your airfare to Venice (or any city in Italy, for that matter) is to travel outside the most popular seasons. Venice is one of those cities that has a steady year-round flow of tourists, so there isn’t really an “off” season, but the city does get noticeably fuller during the Spring and Summer. The real high season runs from roughly late April through early October, so if you can fly outside of those dates you’ll probably be better off in terms of how much your airline ticket costs you.

Another way to save money on airfare to Venice is to route yourself through another European city first. If you can find a spectacular deal to, say, London or Paris or Frankfurt, then you can buy a separate ticket to and from Venice on one of Europe’s famous low-cost airlines. Yes, this takes a bit more planning on your part, because the tickets are completely separate, but it could save you a bundle on airfare. And who doesn’t like that?

>> And now that you’ve flown to the canal city, read all about how to get from the Venice Airport into Venice (and back again), where to find the budget hotels in Venice, and also the best things to do in Venice.