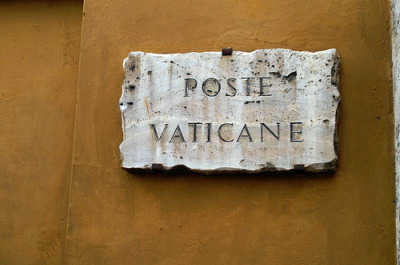 If you know anyone who still collects stamps (is that even still possible with all the self-adhesive jobbies out there nowadays?) and you’re going to Rome, you’ll do them a big favor by swinging into the Vatican City post office. A trip to Vatican City won’t get you a new passport stamp and you may not even realize you’ve crossed any kind of border, but the Vatican is its own little country within the city limits of Rome – and consequently has its own stamps and postal system.

You just have to ask someone who’s lived in Italy about the Italian postal system to understand why the Romans feel fortunate to have Poste Vaticane at their disposal. Italy’s post is notoriously slow, and having a package disappear entirely isn’t unheard of. Poste Vaticane, by contrast, is not only quick and efficient, it’s also staffed by people who tend to be nicer than your average Italian postal worker. 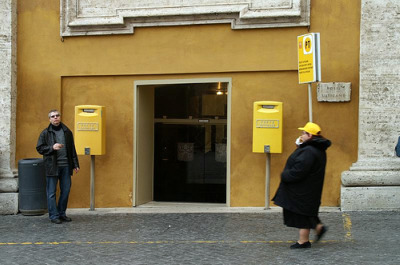 But even if you don’t have to deal with Italy’s postal system much, a stop at the Vatican’s post office is worth the small detour during your visit to the Vatican Museums and St. Peter’s. There are a few post office locations in Vatican City – one of them is inside the Vatican Museum, which is convenient if you’ve got time to buy museum postcards and write them before you leave the shop – but the more accessible branch is just to the left of St. Peter’s Basilica on St. Peter’s Square. If you’re looking at the front of St. Peter’s, turn to your left and you should see yellow Poste Vaticane boxes attached to the wall outside the post office’s door.

The post office at the Vatican on St. Peter’s Square is open year-round, and it’s open Monday-Saturday from 08:30-18:30.

Shelley of At Home in Rome has a fun anecdote of what a trip to the Vatican’s post office is like.

photos by Jessica Spiegel & may not be used without permission