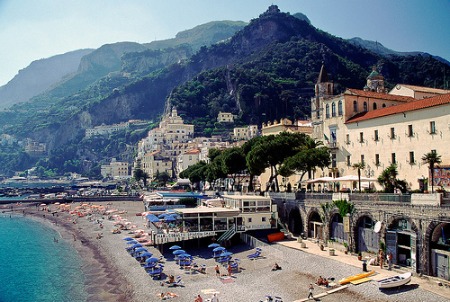 The famed Amalfi Coast has long been popular with the rich and famous, but as millions of travelers by now can verify, visiting the Amalfi Coast doesn’t require a trust fund. The pastel-colored houses that crawl up the hillsides like so many barnacles out of the sea have captured our imagination for decades. This is Italy’s version of the French Riviera, only decidedly more vertical.

The Amalfi Coast, or Costiera Amalfitana in Italian (pronounced koss|tee|EHR|ah ah|mahl|fee|TAH|nah), is located on the western coast of Italy, south of Naples in the Campania region on what’s called the Sorrentine Peninsula. The beachside villages spill into the Tyrrhenian Sea, and the towns up above on the cliffs overlook the coastline with killer views.

If you’re looking for undiscovered Italy, you won’t find it on the Amalfi Coast – not by a long shot. This region has been featured in movies, photographed countless times, and written into songs and poems. It’s more popular with the international jet-set than with rich Italians, although there are plenty of the latter around as well – especially during the summer months. You can still find bargains on the Amalfi Coast, however, if you’re willing to go in the off season or stay in a less popular town.

Where to Stay on the Amalfi Coast 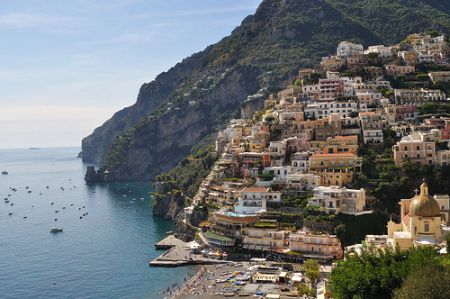 As the Amalfi Coast is noted as a high-end destination, there’s no shortage of luxury hotels in the area. If money is no object, then you’ll have no trouble finding not only a hotel with all the amenities you could possibly ask for but also some of the most glorious views the coast has to offer.

For the rest of us, there are smaller hotels tucked into side streets and smaller towns that often can’t boast the same kind of spectacular views or service but still offer proximity to the beaches and the sea for a fraction of the price.

Some links to get you started:

>> And if you’d prefer to base yourself in Sorrento, here are some cheap hotels in Sorrento and Sorrento hostels to choose from.

Which Towns Make Up the Amalfi Coast 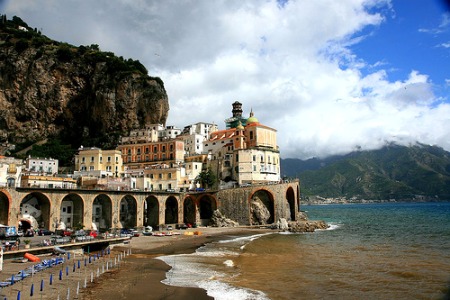 The towns of the Amalfi Coast (in alphabetical order) are listed below – the ones in italics are higher on the cliffs, so not the places to go if you want to be a short walk from the beach:

Things to Do on the Amalfi Coast 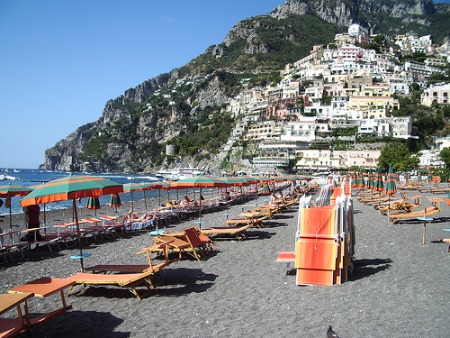 The number one item on most agendas of people who arrive on the Amalfi Coast is simple – to relax. The beaches are crowded in the summer months with bodies that don’t plan on moving unless there’s a very good reason, usually only eating or drinking. And that’s a perfectly fine way to spend a few days (or a few weeks, if you’ve got it) on the Amalfi Coast.

If you get bored, however, there are other things to do in the area.

One of the best hikes in Italy is on the Amalfi Coast – it’s called the Path of the Gods and it’s easy enough that you don’t need to bring any specialty gear (other than good walking shoes). And while you won’t see a Milan Duomo or Sistine Chapel on the Amalfi Coast, there are gorgeous churches in each town – many with notable art on display.

A quick trip to the local tourist information office in whatever town you’re visiting or staying in will provide you with a wealth of ideas for things to do and see besides the beach.