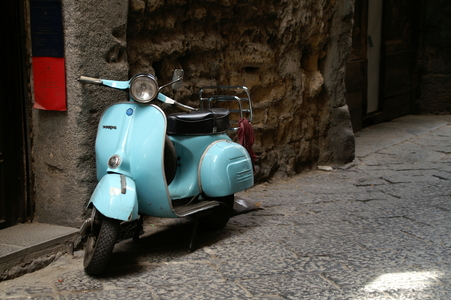 Rome, as I’ve said before, didn’t immediately set up shop in my heart the way some places in Italy have. The Eternal City has now (finally) carved out a little space of its own, largely due to the people I’ve met who love it so much and to the fact that on my more recent visits I’ve made an effort to stay away from the main tourist arteries. But given how long it took for Rome to become a place I genuinely like, I was apprehensive about my first trip to Naples.
I’m happy to report that there’s now quite a comfortable space in my heart for Naples.
At first, I was surprised at how taken I was with Naples – I’d been nervous about making the trip, especially solo, given all the stories one hears about the city. And although I know that after 3.5 days I barely scratched the surface of Naples, I am absolutely enamored by it and eager to return and explore further.
So how did Naples, a city that’s arguably more difficult for outsiders to visit than Rome, become a place I loved so quickly while Rome remains a place I still don’t gush about? I may never know for sure, but I have a couple of theories.
Here are a couple of things that I think led to me liking Naples instantly. (And look for lots more posts on Naples to follow shortly!) 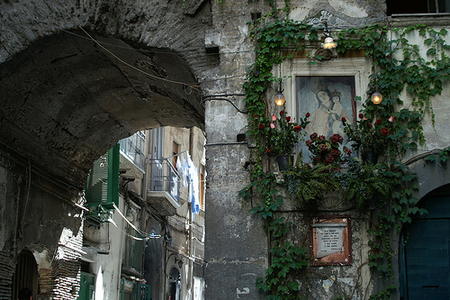 Whenever I’ve gone into a tattoo studio to get a tattoo, I’ve had days (sometimes weeks) in which to psych myself into thinking it’s going to be the most painful thing I’ve ever experienced in my life. I don’t do this on purpose, but I project the level of pain to be way beyond what it could ever be. So the reality of the tattoo, while painful, is never as bad as I imagine beforehand. In that respect, it’s usually almost a pleasant surprise.
Something similar, I think, happened in Naples. And no, I didn’t get a tattoo there.
While I’ve long known I would simply love eating in Naples, I’ve heard enough traveler horror stories and read enough guidebook warnings about the city to be unsure how I’d feel about it myself – and I was even more unsure given that I was visiting on my own. So in some ways, I think I’d psyched myself into thinking it was going to be more scary, more intimidating, and less comfortable than it ended up being.
Now, I was still pretty cautious in my approach to Naples – I ate early dinners (early for Italy) so I could be back at the hotel before it got too late, and I didn’t wander the streets by myself at night. I wore my travel purse across my chest and carried my camera around my neck in front of me at all times. I’m not cavalier about Naples by any stretch, but I also know that I didn’t feel any less safe in the parts of Naples I spent time in than I do in most other big cities. Even beyond that, I grew more comfortable there each day, winding my way through the tiny alleys of the historic center without even bothering to consult a map.
And that was a very pleasant surprise. 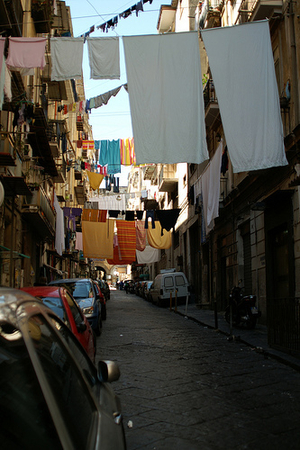 With Rome, during my first and several subsequent visits I had an agenda. I had things I “needed” to see, either as a tourist or for work, and of course those things weren’t conveniently located within a short walk of one another. I was, therefore, more or less following the tourist track from sight to sight, concentrating on the same parts of the city most everyone else visits and getting caught up in crowds everywhere I went.
Not only did this require me to haul myself from one corner of Rome to another and back again, it left no room for finding a quiet corner in which to relax or unwind. And beyond that, all that going back and forth across the city leaves you with no doubt about how huge Rome really is – which, to me, was overwhelming. Sure, Rome is a city of neighborhoods, like any big city is. But the traditional tourist route doesn’t give people an opportunity to see the city that way at all. It’s a massive connect-the-dots puzzle to most tourists, and it’s exhausting.
With Naples, I know there’s lots of stuff outside the old historic center that I didn’t get to on this trip, but I chose to spend my time in that historic center. I’ve seen maps of Naples, and I’ve seen the city from the water, and I know it’s enormous. I know it sprawls along the bay and partway up Mt. Vesuvius. But for my first trip I chose to ignore all of that and make my acquaintance with Naples slowly. As a result of that slow pace, during future visits, I’ll be more at ease with the city and more comfortable exploring further.
In retrospect, I wish I’d been able to do this same thing with Rome – but there’s no way, as a tourist, I would have been willing to sacrifice any of the attractions on my “must-see” list, no matter how far apart they were. And I know that my approach to Naples is something of a luxury that most tourists don’t have when they travel. This is especially true for Americans who get a measly two weeks of vacation per year (if we’re lucky), during which we tend to check sights off our list like we’re shopping for groceries, always mindful of the time. But I’m pretty sure taking it slowly in Rome way back when would have made a difference in the way I felt about the city.

Lessons to Be Learned

As mentioned, I know I had the luxury of time in Naples and the luxury of not having a hard and fast shopping list of sights that made it easy for me to just enjoy getting to know the part of the city I felt like spending time in. When I visit Rome these days I also have that luxury, but it’s because I’ve been to the city enough times now that I don’t need to hit the same popular sights again.
Naples is kind of tailor-made to be taken in the small bite-sized chunks that make it more manageable and less overwhelming. The old historic center is the part most tourists will be interested in, and the Archaeological Museum (one of the city’s top sights) is an easy walk from the historic center. So as long as you choose a hotel or B&B in the historic center, you can pretend the sprawling city of Naples doesn’t even exist.
I don’t think there’s a way for the average traveler to avoid trying to tackle Rome the same way I did in the beginning – because the average traveler isn’t going to want to leave town without seeing the must-see sights. And who can blame them? Not everyone is overwhelmed by Rome, of course, but I’ve heard enough people say that the chaos of Rome got to them to know I’m not alone. If you’re one of the people for whom Rome feels too much, I’d suggest approaching Rome in the same way as I approached Naples, just concentrating on a couple neighborhoods or a certain part of the city.
You’ll likely have to assume there will be return trips to Rome so that you can tick off the rest of the things on the list of sights to see in that city, but there are worse things in life than a return trip to Rome – exhausting or not.
all photos by Jessica Spiegel & may not be used without permission