Full Disclosure & Whatnot: Just so y’know, Marina gave me this mini-tour free of charge. My opinions are my own. 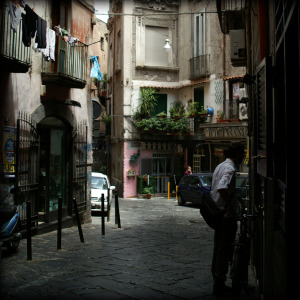 There are few things more energetic than a passionate local trying to rebuild the reputation of her city. When the media only shows one side of the place where you were born and raised – and it’s not all the sweetness and light side – that can do lead to one of two things. You can either become defeated and assume there’s nothing one person can do, or you can attempt what feels like a single-handed effort to show that there’s more to your city than what people see on the news.
Marina de Martino has chosen the second path with the city of her birth, Naples.
Before I arrived in Italy on my most recent trip, I’d received an email from Marina – she’d seen my website, and as a tour guide in Naples she wanted very much to introduce me to her city whenever I managed to make it there. As it happened, I told her, I was planning a stay in Naples in the not-too-distant future – so on the morning of my second day in Naples I met her for a brief spin around the old historic center. I’d spent time the previous day wandering aimlessly through the narrow streets, but Marina was able to give me some context for what I’d been seeing. And together we went into several churches – including a couple I might have missed had I been on my own – as well as a few other stops. My affection for Naples had started the day before, but after spending a few hours with Marina it wasn’t just the city that I was finding so wonderful – it was also the people. 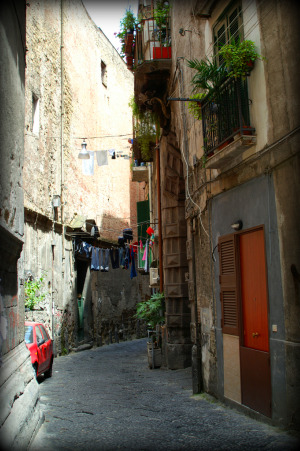 Keeping up with Marina proved to be a challenge, in more ways than one – none of them bad. She is, to put it mildly, spirited. We had a limited amount of time to work with, and Marina kept saying that we had lots to see (we didn’t come close to fitting it all in, either) The effervescence that seems to come to her naturally led her to be not only quick to point out things along our walk, but also quick on her feet. We certainly weren’t meandering through the old city!
But I don’t want to give the impression that I felt rushed, either – following Marina from one stop to another was a bit frenetic (especially given the close quarters in some of those old alleyways and the number of people sharing the same space), but once we reached something she wanted to show me she took the time to explain why it was important and to make sure I understood. This last part is key – Marina isn’t one of those guides who’ll be content with having a herd of camera-toting tourists follow her through a maze as she dictates what to take photographs of. Her mission, as she sees it, is to turn ordinary tourists into “visitors” in her city. And if my few hours spent with her are any indication, she does a fine job of it.
Now, it’s fair to say that Naples deserves some of its bad reputation. Even during my time walking around the city with Marina there were times she’d say, “See that street? Don’t go there. I don’t go there.” But warnings like that can be (and are) given for big cities all over the world. Naples certainly isn’t unique in having areas into which tourists shouldn’t wander. 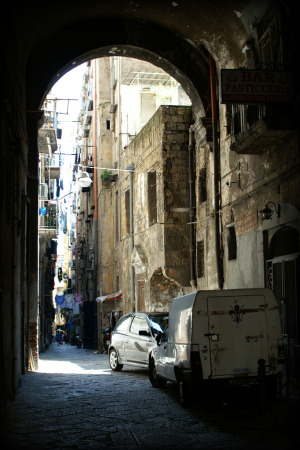 There are many ways in which Naples is unique, however, and Marina is eager to point them out. She is an active member of a local cultural organization, and as I accompanied her into several of the churches in Naples I felt like she was visiting family. The people standing guard or taking tickets would pull aside ropes for us to get a closer look at carvings, or take extra time to explain a piece of artwork. And they all exhibited the same kind of fierce hometown pride that Marina does.
Throughout my day with Marina she impolored me repeatedly, “Please promise me you’ll write about this – Naples is not just the Camorra.” And the people she introduced me to said the same thing. Are there Mafia problems in Naples and the greater Campania region? Absolutely. But there’s so much more to the city and region than just that. And to be perfectly frank, while the residents of Naples have a long fight on their hands to rid their city of what some may argue is a Camorra stranglehold on certain aspects of life there, the influence of organized crime isn’t something that will affect most tourists. In all likelihood, you’ll spend your time in Naples never being aware of it at all.
Having said that, there are some cities where it pays to hire a local tour guide to help you feel more at ease and help you steer clear of those places where even the locals don’t venture. It’s not as if Naples is so terribly unsafe that you shouldn’t go, but for most visitors having a tour guide around will soften some of the city’s hard edges. After spending a few hours with Marina, I would recommend her to anyone who’s looking for a local guide with a lot of heart and a warm and inviting personality. The bottom line is this – the simple fact that she was born and raised in a city that she happens to love deeply makes her a guide worth hiring.
Marina de Martino – Naples Tour Guide – More Information

Marina’s website is Napoli No Stress Itinerari – and she’s happy to suggest certain itineraries to you, but if you’ve got things in mind that you’d like to see you should definitely bring them to her attention. Because she works with small private groups, she’s able to tailor the tour to meet your needs. She speaks English and German in addition to Italian. There’s a contact form on her website, so you can either send her a message that way or you can call her on her mobile phone (number also listed on the “contact me” page of her site).
photo of Marina de Martino from her website; all other photos by Jessica Spiegel & may not be used without permission