A Visit to the Galleria Ferrari: The Ultimate Ferrari Museum 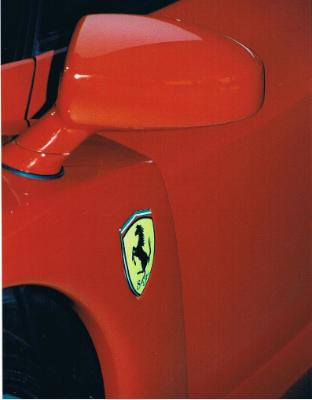 Which is the most quintessentially Italian car – Ferrari or Lamborghini?

While there are undoubtedly people who are more qualified to answer that question than I am, for my money (which will never amount to enough to buy either one, by the way, even though it only ranks 4th among Italy’s most expensive cars) the clear answer is Ferrari. For me, a Ferrari is the automotive equivalent of Italy – it’s flashy, it’s gorgeous, it’s energetic, and it’s way more fashionable than I’ll ever be. So although I am in no way a car person, I can totally see why a visit to the Ferrari Museum in Italy would be on many travelers’ to-do lists.

>> You can skip over the museum description and all the photos by going directly to “How to Get to the Galleria Ferrari” or the visitor’s information.

The Ferrari museum is called Galleria Ferrari, and it’s located outside Modena in the town of Maranello, which is in the Emilia-Romagna region of northern Italy. The museum itself is within sight of the Ferrari factory, and visitors can often see Ferrari workers walking to and from the factory (especially around lunchtime) in their trademark red worksuits. During a 2004 visit to Italy, the husband insisted upon a stop at the Galleria Ferrari – and since he was driving the rental car, I went along for the ride! These photographs are from that trip, but the museum’s newest wing was still in the final stages of construction at that point (it opened in October 2004), so the Galleria will look a bit different if you’re visiting today.

(As a side note, I’ll also ask that you forgive the photos their less-than-crystal quality – this visit was back in my pre-digital days, so these are all scans of my original prints. Yes, I know. So old school. Clearly I need to make a return trip with my new digital camera, eh?) 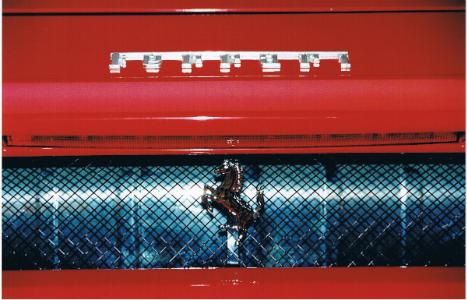 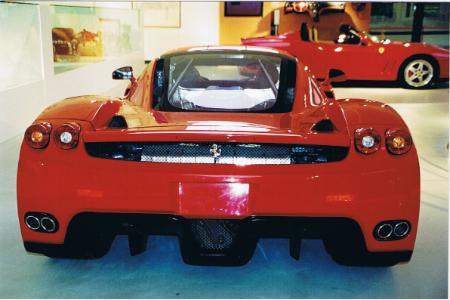 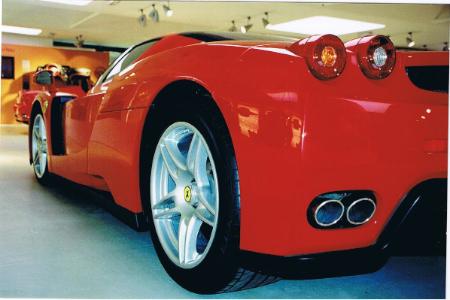 Galleria Ferrari was first opened to the public in 1990, although for the first five years of its existence it was run by the town of Maranello rather than the Ferrari company. In 1995, Ferrari took over management, although the museum still remains the property of the town. The 2004 expansion means that there is now 2,500 square meters of space in which to show off not only lots of Ferrari cars but also historic photographs, racing awards, and Ferrari memorabilia. There are also often special temporary exhibits on display. 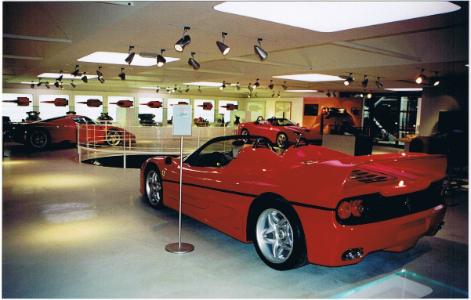 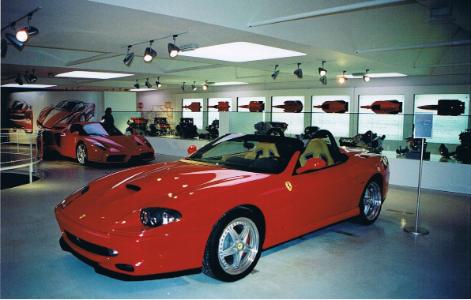 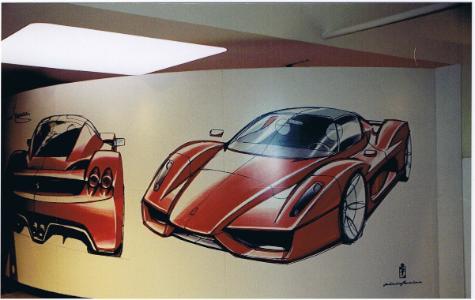 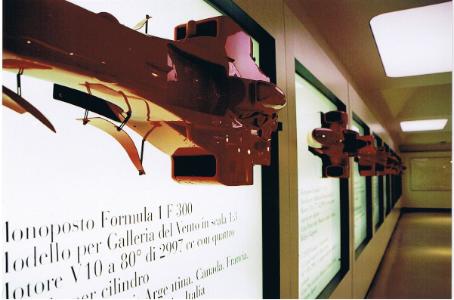 Although there are more cars in Ferrari’s collection than are on display at any given time, you’ll be able to see roughly 40 cars when you visit (they’re on something of a rotation, presumably to make you come back later and see if there’s a new car or two out since your last trip). The cars represent both new innovations and Ferrari’s history – the collection even includes the first Ferrari 125 S which was built and raced (and won) in 1947. 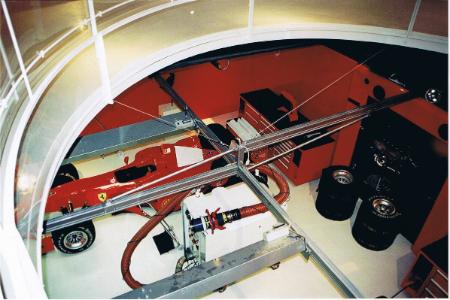 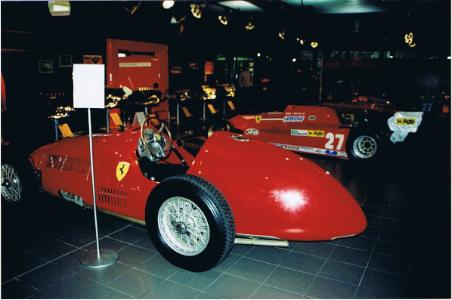 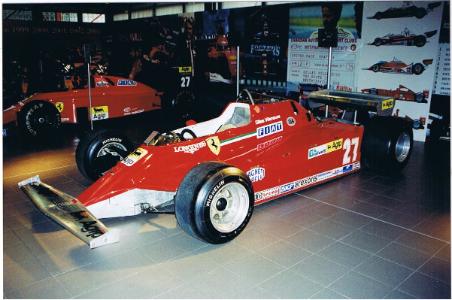 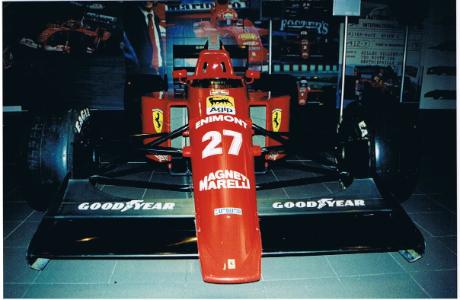 The main exhibits at the Galleria Ferrari are dedicated to the company’s involvement with Formula 1 racing and the exhibits related to the Granturismo and technological innovations Ferrari has made. If I can assume the husband’s reaction is typical of car people (and I think I can), then car people will thoroughly enjoy and understand the significance of the cars on display. And even if you, like me, think they’re all just “pretty red cars,” well – that’s okay, too.

The cars on display can be split into two categories – road cars and competition cars. Some of the models you may see at the Galleria Ferrari during your visit are: 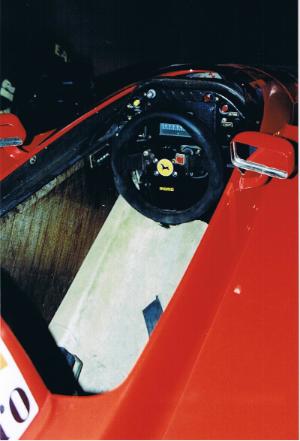 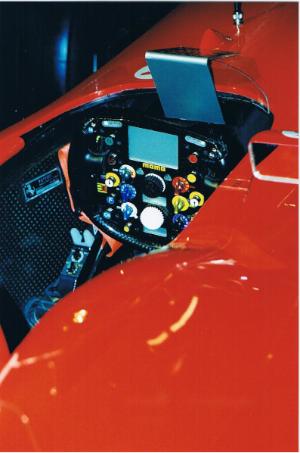 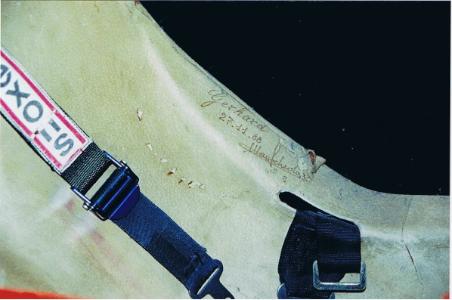 Unfortunately, unlike the Lamborghini Museum in nearby Sant’Agata Bolognese, the Ferrari factory itself is in an separate building not visible from the Galleria – and getting into the factory is nigh unto impossible (in other words, if you have to ask how to get in, you can’t afford it). But what Ferrari does have that Lambo doesn’t is the Fiorano test track right next to the factory and museum (you can see the track to the northwest of the museum on the map below) which, if you’re lucky, will have a car zipping around it when you’re visiting. 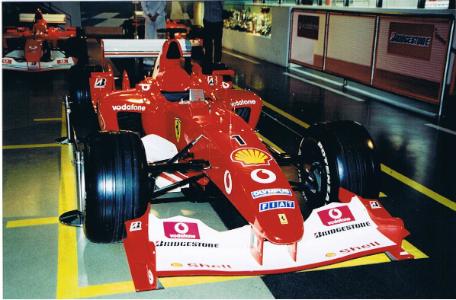 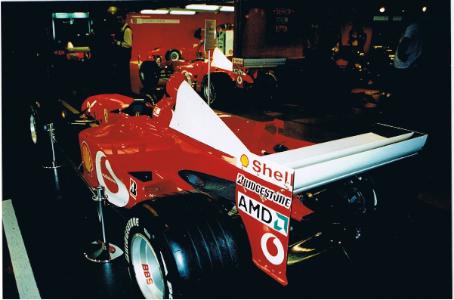 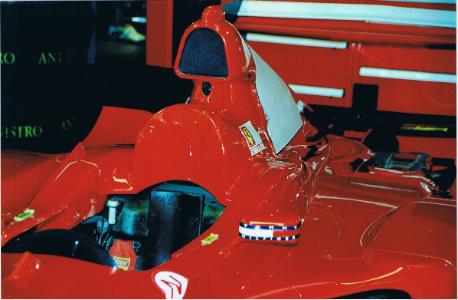 How to Get to the Galleria Ferrari

A visit to the Galleria Ferrari doesn’t come cheap (nor does even the smallest souvenir in the museum shop), but would you expect anything else from Ferrari? I can’t find any information about getting to the Galleria Ferrari via public transportation, but I suppose that shouldn’t be surprising. This is a car museum, after all, why would they make it easy to arrive in anything but a car? The trouble is that the museum is even tough to find with a car – we drove through Maranello three times before finally stopping at a gas station to ask for directions, and we were pointed down a street we’d already been down! There weren’t any signs pointing toward the museum when we were there, but perhaps they’ve made it easier to locate since then.

The driving directons below are taken from the Galleria website and may not be entirely helpful – so I’d advise asking for more specific information from the tourist information office in the town you’re staying in. Also, be sure you’ve got a good and detailed road map – or a trusted GPS system!

From Milan Take the A1 Milano-Napoli motorway, direction Bologna. Take the exit Modena Nord. Take the ring direction Abetone-Sassuolo. Follow the signs for Maranello-Formigine. Turn left and follow the road Giardini for 3km.

From Bologna/Florence/Rome Take the A1 Milano-Napoli motorway, direction Milano. Take the exit Modena Sud, and then follow the interstate SS623 for 1km. Turn left and continue on the road Sp16 for 15km. Turn right and continue for 3km. 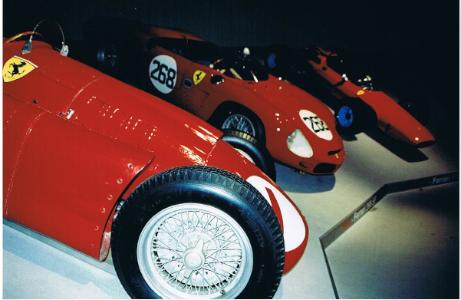 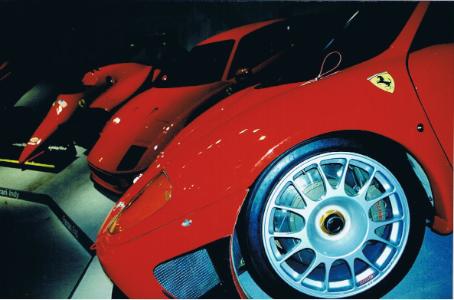 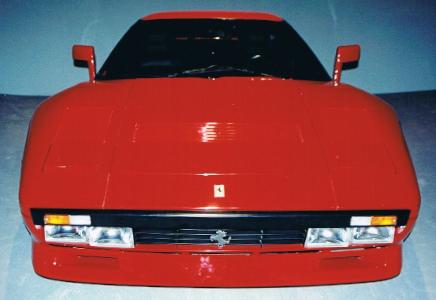 >> Check out these additional photos from the Galleria Ferrari (from another 2004 visit!) on Countries Beginning with I