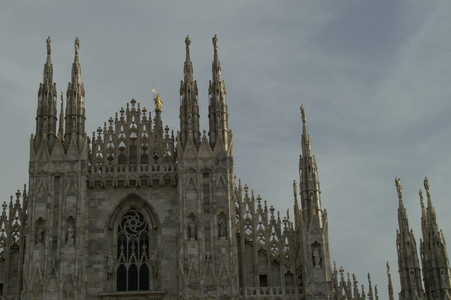 Milan is a city of banking, high fashion, and big business (at least big for Italy) – so it’s probably not surprising that finding something that qualifies as a “budget hotel” in the city center can be a tall order. The problem is compounded by the fact that because there’s often a trade show or fair going on in Milan, the hotels that might otherwise be offering great deals in the off season are not only charging more for their rooms but they’re often booked solid with business travelers.

So, can a budget traveler get a decent deal on a hotel in Milan?

The answer is yes, you can – you just might have to adjust your definition of “a decent deal,” or of “city center.” One thing that could work in your favor in Milan is visiting the city on a weekend. The business travelers are in town during the work week, and so sometimes you’ll find hotels offering better weekend deals as their rooms empty.

Here are a few of the budget hotels in Milan that you might want to consider for your trip. Keep in mind they probably won’t be close to any of the sights – but as long as you’re close to a metro, tram, or bus stop, you’ll be able to get anywhere in the city you want to go.

Below, you’ll see a map of the Milan city center, with the Duomo and Stazione Centrale marked – along with all the budget hotels I’ve listed here. You can find out more information about each hotel by either scrolling to the descriptions underneath the map, or simply by clicking on the hotel icons on the map itself.

>> And if these places aren’t budget enough for you, then check out these hostels in Milan – there aren’t many, but they do exist!

Hotel Florida
Via Lepetit 33 – 20124 Milano
This 3-star hotel is a short 50 meters from Milan’s main train station, and the Hotel Florida’s sleek and contemporary design belies its budget hotel pricetag. The hotel was built in 1949 but renovated in 2004. There are 53 rooms and 2 suites available, all with private bathrooms.

WiFi and breakfast are both available for no additional cost, and most of the rooms at Hotel Florida are labeled “hypo-allergenic” because they’re carpet-free and have “hygenic furnishings.” You can request a room with a balcony or terrace, and all rooms come with satellite TVs and air-conditioning.

The Hotel Florida has an elevator and an on-site bar, and two breakfast rooms. Low-season rates start at €80 for a double, and high-season rates range from €100-133 to start with.

Hotel Corallo
Via Cesena 20 – 20155 Milano
As Milan is a business city, Hotel Corallo is located very close to the Milan Trade Fair Grounds – which isn’t close to the tourist center at all. Still, this 3-star hotel is close to a Metro station and offers cheap rooms.

Among the perks of Hotel Corallo are the free continental breakfast and free WiFi. And if you’re driving to Milan, it’s located not far from highway access points to and from Milan. And, being a business hotel, you can get your laundry and ironing done for a fee.

The Hotel Corallo has 34 rooms, all of which have private bathrooms, air-conditioning, and satellite TV. Low season rates for a double start at around €55, and in the high season a double can cost about €60-80.

Roxy Hotel
Via Nino Bixio 4/a – 20129 Milano
Unlike most of the budget hotels, the 3-star Roxy Hotel isn’t located near either the main train station in Milan or the Trade Fair Grounds – it’s in what’s known as the Città Studi neighborhood about 1km east of the Duomo, which is where a university is located (hence the name).

The Roxy Hotel was renovated in 2007, and all 36 rooms offer private bathrooms, satellite TVs, air-conditioning, and free WiFi. There’s an on-site bar, and continental breakfast is free. This isn’t a fancy place, but it’s got the basics covered.

Low season rates start at about €80 for a double, and in the high season a double will cost €85 or more. 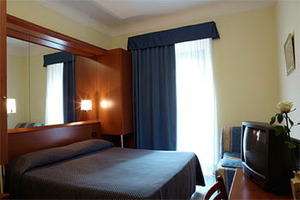 The Aurora Hotel is located on one of Milan’s busiest streets, the Corso Buenos Aires. This small 1-star hotel has only 16 rooms available, and it’s located between the Duomo and Milan’s central train station, a short 50 meters from a Metro station.

Because this is such a small hotel, there’s no breakfast available or on-site restaurant. The Aurora Hotel does offer internet access (for a fee), and the Corso Buenos Aires is teeming with places to eat and shop. So you won’t go hungry for lack of a hotel bar.

Low season rates for a double room start at €70 and go up to €130 in the high season.
>> Book Aurora Hotel in Milan

There are 105 rooms in the Hotel Milano Corso Genova, all of which have private bathrooms, satellite TVs, air-conditioning, and high-speed internet access. WiFi is available in the hotel’s common areas and on the 1st, 2nd, and 3rd floors (for a fee), and there’s a really nice breakfast spread available as well (for a fee).

In the low season, a double room will start around €100, and in the high season a double can cost €130 or more.

Hotel Mazzini
Via Vitruvio 29 – 20124 Milano
The 3-star Hotel Mazzini is located about 250 meters from Milan’s central train station in a three-storey 20th century Milanese townhouse (there is an elevator). It’s a small family-run hotel with only 18 rooms.

All of the rooms at the Hotel Mazzini have private bathrooms, air-conditioning, satellite TVs, and an internet connection. A continental breakfast is included in the price of the room, and there is an on-site bar. The building also has a garden area, if you need a break from the concrete of the city.

Best Western Hotel Berlino
Via Plana 33 – 20155 Milano
Located kind of between Milan’s center and the Milan Trade Fair Grounds, the 3-star Best Western Hotel Berlino is actually not far from one of Milan’s most famous streets – Corso Como. But unless you have the kind of budget required to dine in the fancy restaurants or shop in the fancy stores along Corso Como, it’ll be a quick stroll from one end to the other before you’re looking for something else to do.

There are 47 rooms in the Hotel Berlino, an “American bar,” and a TV lounge. The rooms all have private bathrooms, air-conditioning, satellite TV, and modem plugs. The hotel was renovated in 2007. A continental breakfast is available for free, although internet and WiFi access do cost extra.

Low season rates for a double start at around €70, and in the high season a double will cost €85 and up. You can arrange for a free shuttle to the airport, if you check with the hotel in advance.

There are 28 rooms in the Hotel Gonzaga, all of which come with private bathrooms, air-conditioning, satellite TV, and high-speed internet connections. The hotel has an on-site bar and an elevator, and a continental breakfast comes free with the room.

A double room at Hotel Gonzaga can be as little as €80 in the low season, and as high as €300 in the high season.

Cristallo Hotel
Via Scarletti 22 – 20124 Milano
The Cristallo Hotel is a 3-star property located about 200 meters from Milan’s central train station, and the hotel’s 103 rooms have recently undergone a renovation.

Each of the Cristallo Hotel’s rooms has a private bathroom, WiFi access (for a fee), air-conditioning, and a TV. The hotel has an on-site bar and WiFi access throughout (for a fee), and a continental breakfast is included for free with your room. If you’re driving to Milan, the hotel offers parking at a discount to guests. 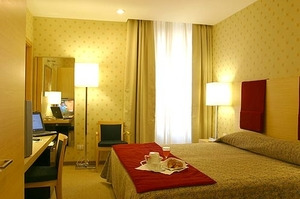 There’s more than one train station in Milan (no, really), and the Holiday Inn Garibaldi Station is located within sight of one of them. It is, therefore, within easy reach of anywhere else via public transport, even if it’s not really in the city center proper.

The Holiday Inn Garibaldi Station is listed as a 4-star hotel, but the prices can be really reasonable (likely because of the not-ideal location). The hotel does boast an on-site fitness center as well as an on-site restaurant, and the rooms all have private bathrooms, air-conditioning, and satellite TV. Internet access is available for a fee.

original photo at the top by Jessica Spiegel, and may not be used without permission