Budget Hotels Near the Colosseum 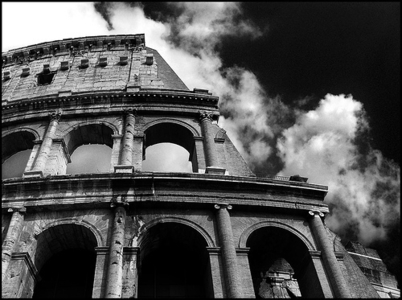 As the most easily identifiable landmark in Rome, the Colosseum makes an ideal point of reference for tourists in the city. It’s especially helpful if your hotel is within walking distance of the Colosseum, not least because there’s a Metro station right next to it and lots of bus lines pass by as well.

Unfortunately, most of the hotels right around the Colosseum – especially those that boast a view of the amphitheatre – are way out of the price range of most budget travelers. There are some budget hotels around the Colosseum, however, as long as you don’t mind sacrificing that perfect Colosseo view from your hotel window.

You’ll find a map below with the Colosseum and each of the hotels on this list marked, so you can see exactly where each place is. Below the map, you’ll find more details for each hotel – or you can hover over each little blue hotel icon on the map for a link that’ll give you more information about the hotel, too.

>> And if you’re on even more of a budget, check out these hostels near the Colosseum!

Budget Hotels Near the Colosseum

This five-storey building features an elevator, WiFi access, SKY TV, access to the rooftop garden, and access to private parking. Each of the 24 rooms has SKY TV and comes with a free breakfast buffet (including gluten-free options!). The Hotel Fori Imperiali Cavalieri is also entirely non-smoking.

Mercure Roma Delta Colosseo
Via Labicana 144 – 00184 Rome
The Mercure Delta Colosseo hotel is also on the higher end of the “budget” price range, but it’s a great location (and can definitely be a steal in the low season). Not only is this hotel roughly 200 meters from the Colosseum, it’s even closer to a lovely big Roman park, the Parco Traiano.

Sleek and modern-looking, the Mercure Roma Delta Colosseo has 160 rooms, an outdoor pool, covered private parking, 2 on-site bars, cable TV in all the rooms, and Colosseum views from some of the rooms. The rooms feature WiFi access, and breakfast is available.

Hotel Solis
Via Cavour 311 – 00184 Rome
The 3-star Hotel Solis is only about 200 meters from the Colosseum and Forum on the hotel-rific Via Cavour. Many of the hotels on this street are higher end and have higher prices as well. But this hotel has plenty of amenities that should please any budget traveler.

Guests in the 17 rooms at the Hotel Solis can enjoy cable TV and WiFi in their rooms, and free breakfast in the dining lounge. There’s an on-site bar at the hotel, and some of the rooms feature private balconies with a view of the Forum.

Adas Hotel
Via Cavour 233 – 00184 Rome
Further up the Via Cavour is Adas Hotel, a two-storey hotel in a six-storey building (oddly, the hotel’s two floors aren’t consecutive). It’s a 2-star hotel, so you’ll find fewer perks than even the 3-stars on this street, but the prices reflect the difference.

There are 18 rooms at Adas Hotel, all of which have A/C, WiFi access and en suite bathrooms. Internet access is free in the lobby, but breakfast (available daily) will cost extra.

Hotel Duca d’Alba
Via Leonina 14 – 00184 Rome
The Hotel Duca d’Alba is roughly 300 meters from the Colosseum, and a couple of blocks from the Cavour Rome Metro stop. And although this part of Rome is by no means peaceful, all the rooms in the hotel are soundproofed so you’ll be able to sleep restfully after a busy day of sightseeing.

There are 30 rooms in the Duca d’Alba Hotel, each of which is slightly different, but they all feature free internet and WiFi, satellite TV, A/C, and all are non-smoking. Some rooms have private balconies, and a buffet breakfast is included with the room.

There are 24 rooms in the Hotel Apollo, all of which have A/C, private bathrooms, and satellite TV. Guests can enjoy the view from the hotel’s rooftop garden, and in nice weather it’s also a great spot for the free continental breakfast. There’s an on-site bar and internet access available in the lobby.

Hotel Colosseum
Via Sforza 10 – 00184 Rome
With a name like “Hotel Colosseum” you might expect this place to be right on top of the famous monument, but it’s not. It’s definitely within walking distance, but you’ll have to head up to the hotel’s rooftop terrace to enjoy views of the Colosseum or the rest of the city. The closest Metro stop is Cavour, a short walk from the hotel.

Borromeo Hotel
Via Cavour 117 – 00184 Rome
The 3-star Borromeo Hotel is about halfway between the Colosseum and Termini Station, so it’ll give you pretty easy access to both. And if walking to either seems like too much at the end of a long day, the hotel is a very short walk to the Cavour Metro station.

The 30 rooms at Borromeo Hotel have WiFi access, satellite TV, A/C, and private bathrooms. WiFi is free in the lobby, and there are non-smoking rooms available. The hotel has also recently been renovated to be wheelchair accessible, and in nice weather breakfast is served in the hotel’s rooftop garden.

Hotel Valle
Via Cavour 134 – 00184 Rome
The Hotel Valle is practically next door to the Borromeo Hotel on Via Cavour, roughly half the distance between the Colosseum and Termini Station. Built in 1950, the 3-star hotel was renovated in 2002 and is about 100 meters from the Cavour Metro station.

There are 30 rooms in the Valle Hotel, all of which have A/C, private bathrooms, and satellite TV. There’s an on-site bar at the hotel, and parking available in a garage nearby. The rooms are soundproofed, and buffet breakfast is included with the price of the room.
>> Book Hotel Valle in Rome

photo at the top by brtsergio