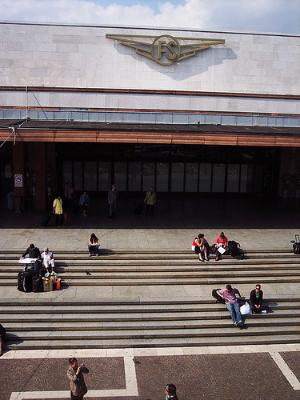 Because so many of the gorgeous old buildings in Venice are former palazzi that have been turned into luxury hotels, finding inexpensive accommodation can be tricky in this much-visited city. There’s only one true hostel in Venice, and it’s on the Giudecca – so it’s quite a distance from the train station, and it’s also lacking in anything resembling hotel-like amenities. So if you’ve gotten a good deal on your airline tickets to Europe, you’re looking for something that’s a step above your typical hostel but that won’t blow your whole travel budget, and something that also doesn’t require a long hike after you’ve gotten into town, then here’s a list of some budget hotels near the Venice train station.

I’ve listed the 2-star hotels first, and for even cheaper rooms scroll down to find a few 1-star hotels near the station. For more budget options, you can consult my list of the hostels in Venice.

You’ll find a map of Venice below with the Santa Lucia train station as well as several hotels around it marked. Below that, you’ll find a brief note about each of the hotels on the map. To get further information about each hotel – and to book any of them – you can either click on the hotel icons on the map, or the links in the descriptions below.

>> For a look at the hotels around the Santa Lucia station that are yet another step above the hotels featured here, then here’s my list of some of the 3-star and 4-star hotels near the train station in Venice.

Hotel Florida
Cannaregio Calle Priuli Cavalletti 106 – 30121 Venice
The Hotel Florida is easily one of the closest hotels to the front doors of the Venice train station, no matter how many stars you’re looking at. There are 19 rooms available, and all of them have private bathrooms, air conditioning, and modems for dial-up internet access. WiFi is also available in most of the hotel for free.

While you wouldn’t expect luxury decor in a two-star hotel, you can expect the rooms at the Hotel Florida to be comfortable and clean. They’re well-lit and they’re equipped with everything a budget traveler needs. And if you’re looking to be close to the train station, you just can’t beat this location.

Hotel Florida has singles, doubles, triples, and quads available. A double will range in price from €90-165 depending on the season, and a single can go from between €70-120. Breakfast is included with the price. 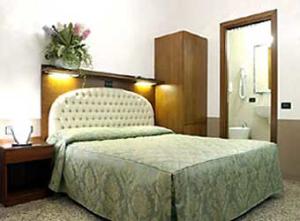 The main pedestrian thoroughfare from the Venice train station into the heart of the city is the Lista di Spagna, and the Hotel Atlantide is right off the Lista di Spagna on a small side-street. Despite its proximity to that hustle and bustle, the hotel offers a private garden where you can escape from the city a bit during nicer weather.

There are 22 rooms at the hotel, all of which are en-suite and which come in singles, doubles and triples. And although the hotel doesn’t have an on-site restaurant, they do own and operate a restaurant in the Campo Santa Margherita and they’re happy to make reservations there for you.

You should be aware that the Hotel Atlantide covers three floors and there’s no elevator, so if you have trouble with stairs you should definitely ask for a ground-floor room when you book. There’s also no air conditioning in the rooms, although each room does have a fan. Prices for double rooms range from €80-100 depending on the season. Breakfast is included with the price.
>> Book Hotel Atlantide in Venice

Zecchini Hotel
Cannaregio Lista di Spagna 152 – 30121 Venice
The Zecchini Hotel is one of the hotels that’s located right on the busy Lista di Spagna, only a short walk from the train station, in a former Venetian townhouse. There are 27 rooms in the hotel, all of which come with central heating – but if you’re visiting in the height of summer, you’ll have to request one of the rooms with an air conditioning unit if you’ll need something stronger than the fan that’s in most of the rooms.

Although the hotel-operated restaurant isn’t on-site, it is nearby and the front desk staff can make a reservation there for you. There is a breakfast room in the hotel where a continental buffet is served each morning.

There’s no elevator at the Zecchini Hotel, so if you have trouble with stairs be sure to request a ground-floor room when you’re booking. Rooms range in price from €100-140 for a double, depending on the season, and breakfast is included with the price. 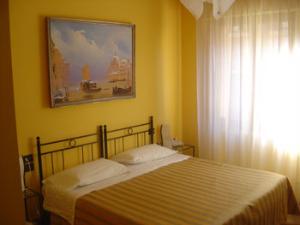 The Alloggi Agli Artisti Hotel also calls itself a B&B, although the breakfast isn’t any more elaborate than the continental buffet you’ll get at many budget hotels. In other words, this is a pretty typical two-star hotel – don’t expect a true B&B or you’ll be disappointed.

Rooms at the Alloggi Agli Artisti are available as singles, doubles, and triples, and you can choose either a room with an en suite bathroom or one that makes use of a shared bathroom. As you’d expect, the bedrooms that don’t have their own bathrooms are cheaper. An en suite double ranges in price from €80-160, and a double without its own bathroom ranges from €60-110 (depending on the season). Breakfast is included with the price. And, in what I think is a fun addition, the hotel will also provide you with free boots to use if there happens to be a high water event in Venice while you’re there!
>> Book Alloggi Agli Artisti Hotel in Venice

Moderno Hotel
Cannaregio Lista di Spagna 154B – 30121 Venice
Another hotel located on the Lista di Spagna is the Moderno Hotel, which is also housed in a former Venetian townhouse. Compared to the other two-star hotels on this list, however, this is a very small hotel – there are only nine rooms available.

There are singles, doubles, and triples available at the Moderno which range in price depending on the season. A double goes for anywhere from €50-200.

Hotel Caprera
Cannaregio Lista di Spagna 219 – 30121 Venice
Located just off the Lista di Spagna is the Hotel Caprera, with its 14 rooms, about 200 meters from the train station. The hotel was opened in 1953 and remains under the management of the family which started the business.

All of the Hotel Caprera’s 14 rooms have a phone and satellite TV service, but not all of them have air conditioning (so you’ll need to request that if you’re particular about it). Some of the rooms have their own private balcony as well. The hotel does have WiFi access, but whether your room will be within range of the signal (which is at the reception desk) depends – to be sure of having WiFi, request a room on the ground floor (even parts of the 1st floor have sketchy signals, and you’re just pushing your luck with rooms on the 2nd or 3rd floors).

At the Hotel Caprera you can choose to book your room with or without breakfast included, so if you’re really on a tight budget opting for the room-only can save you a few more euro. There are singles, doubles, triples, and quads. A double room with breakfast runs from €82-132, and without breakfast it’s €70-120 (depending on the season). All rooms have private bathrooms. 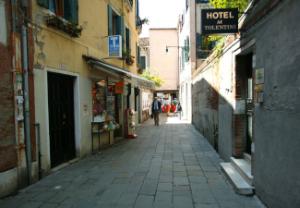 Of all the hotels on this list, both 2-star and 1-star, the Hotel Ai Tolentini is the only one that’s not in the Cannaregio district. It’s across the Grand Canal from the train station in the Santa Croce district, but still only a short walk from the station itself.

You can book a single, double, or triple room at Hotel Ai Tolentini, and all of them have a private bathroom, but only some have an actual bath (the rest have stall showers). All the rooms are equipped with a TV and a ceiling fan, but no air conditioning. And in true budget hotel fashion, there’s not even a breakfast option here – which saves both the hotel and you some money.

There are only 11 total rooms at the Hotel Ai Tolentini, so you’ll want to book early if you know you want to stay here. A double will run anywhere from €90-100 (depending on the season and whether you get a room with a bath).
>> Book Hotel Ai Tolentini in Venice