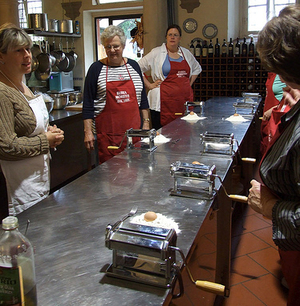 Some people who visit Italy are content to enjoy the country’s famous cuisine in restaurants, trattorie, and crowded bars. Some with access to a kitchen, like in a hostel or an apartment rental, take it a step further by shopping in the Italian food markets and trying to reconstruct Italian recipes on their own. But if you really want to get the inside scoop on the dishes that make Italian cuisine what it is, then the next logical move is to sign up for a cooking class in Italy.

But what usually comes next is a web search of the words “cooking schools in Italy,” and a barrage of results. How do you know which one to choose?

Only you will know when the description of a cooking school looks like it’s the one for you, but here are a few things you might want to consider when comparing your options. 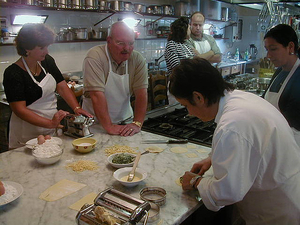 You may immediately think of Tuscany when you think of Italy’s cooking schools, and while there are plenty in the Tuscany and Umbria regions there are also cooking schools in many other parts of the country. Cooking schools in Tuscany do seem to be more numerous than elsewhere in Italy, however, and you certainly wouldn’t be disappointed by the surrounding scenery if that’s the route you decided to go.

People who know Italy well may be interested in exploring a region they aren’t as familiar with by signing up for a cooking school in that part of the country. On the other hand, for those with less Italy travel experience, booking a spot in a cooking school in or near a major tourist city gives you the added benefit of being close enough to visit the big attractions when you’re not in the kitchen.

The “where” question is also something you’ll need to take into consideration when you’re determining what kind of transportation you’re going to be relying on while you’re in Italy. If you’re someone who really doesn’t want to drive in Italy and will be restricted to public transportation, then you’ll want to be sure the cooking school you choose is situated somewhere that’s easily accessed by train or bus. Many cooking schools are in more rural locations which may be tough to get to without a rental car – which isn’t a bad thing, it’s just something you’ll need to know in advance. 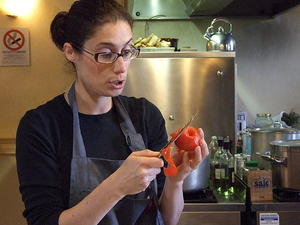 Cooking schools in Italy can take on many forms, and include many different elements. Some of the various extras you may find as part of your cooking class itinerary could be regular trips to the Italian market to pick up the necessary ingredients for the day’s recipes, a visit to a nearby winery or cheese maker to see the process behind the foods you’re eating and cooking with, and even a meal out at a local restaurant.

Depending on where your cooking school is, you may also find that things like lodging and other meals are included in the price as well. This is especially likely if the cooking school doubles as an agriturismo and/or is well off the beaten path, so that there aren’t any nearby hotels or restaurants to speak of.

Not every cooking school is going to include extras like lodging, excursions, or meals, and there are great ones that don’t – it’s just something you’ll want to know when you’re comparing your choices. That way you’ll know if the prices you’re seeing are really for similar experiences, or if the one that’s charging more is doing so because you won’t have the added expense of a hotel (for instance).

How long is it? 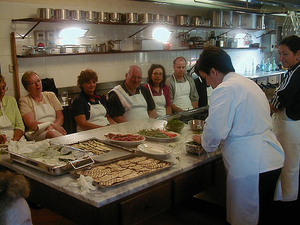 You can find cooking school experiences in Italy that last anywhere from a day to a week, or even longer. This is great news in that you’ll be able to find one that suits your trip perfectly, whether you’re spending a month otherwise aimlessly wandering through Tuscany or you’re on a mission to hit Rome, Florence, and Venice plus spend a couple days learning to cook, all in a 10-day trip. (The latter is truly crazy, and you shouldn’t try it, but I really can’t stop you if you desperately need to do something crazy, can I?)

When you’re looking at the duration of the cooking classes, also check out what kind of free time you’ll be given. If you’re in a remote agriturismo for a week, you may not have an opportunity to hop on a bus and spend half a day (after class, of course) in a museum. But if your cooking school is either more easily accessible via public transport or gives you ample free time, you may be able to tick off all kinds of local to-dos in between cooking sessions. That is, if you want to do anything other than kick back and relax!

How many people are in each class? 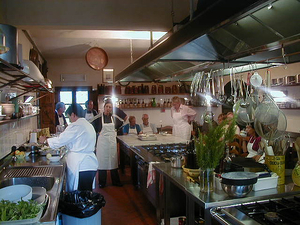 Some Italian cooking schools are equipped with big, industrial kitchens which can handle a group of people all cooking at once. Others are decidedly more rustic, and require taking turns with the appliances. In addition to knowing what the setting of a cooking school is like (rustic vs. modern), it’s important to know how big the maximum group size is at the school as well. The last thing you want to do is pay good money and spend your hard-earned vacation time being ignored by the instructor because there are 15 other people who are getting attention before you.

Depending on your budget, you may also want to look into private cooking classes in Italy, too. These can be one-on-one or, if you’re traveling with your own small group, can be tailored to your specific needs. Private – or at least smaller – classes are also particularly good for anyone who’s a bit more serious about getting something out of the experience. If you’d like to actually learn a recipe or two that you can make back home, rather than just putter about in an Italian kitchen and eat the products of your efforts while on holiday, then a small or private class is definitely the way to go.

Some Italian cooking schools to check out: 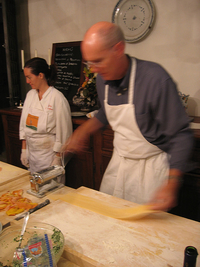