Hiking Guide to the Cinque Terre 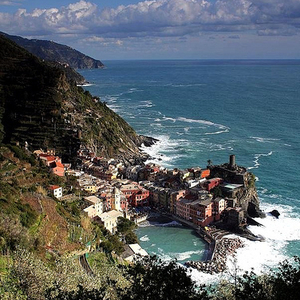 No matter how crowded the tiny villages of the Cinque Terre are getting these days, they remain intensely beautiful, almost impossibly charming, and reasonably accessible to visitors – all of which means they’ll continue to be popular on most peoples’ to-do lists when they come to Italy. Among the biggest reasons why people visit the Cinque Terre to begin with is the hiking.
There is a cliffside trail which connects the Cinque Terre villages, and which provides some stunning views over the Ligurian Sea. But each connecting trail is slightly different, from how difficult it is to how well-maintained it is. In this article, I’m going to break down the hike into its individual sections so you can better plan your trek (and decide whether there are any segments you’d just rather skip entirely!).
>> Learn more about getting around in the Cinque Terre for the times when you’re not hiking, too.

Hiking Guide for the Cinque Terre 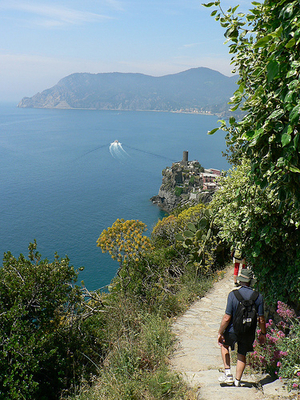 I have a habit of thinking of the Cinque Terre towns in a numbered way, which isn’t uncommon among travel writers who have covered the area. Unlike most of them, however, for some reason I start my numbering system at the top (northernmost) town and work my way down (south). For the purposes of this article, however, I’m going to reverse that – because the hikes starting from the southernmost town get harder as you go north, so it makes sense to increase the number rather than decrease it!
The trails connecting the Cinque Terre towns (and the land surrounding them) was turned into a National Park in 1999, and ever since then hikers have to pay a fee to enter the park and walk between the villages. Being a National Park also means there are certain hours when the trails are open – it’s no longer a 24/7 operation. You’ll find all the Cinque Terre National Park information you need – including entry fees, trail maps, and the passes you can buy – at the bottom of this post.
Because the trail goes through each village, you’ll get a chance to visit every Cinque Terre town (if you do all the hikes). This route will let you get a bite to eat along the way, but it also gives you ample opportunity to lose sight of the next part of the trail. Luckily, the folks in the National Park were thoughtful enough to paint red and white colored markers in strategic places to lead you around corners, up staircases, and away from main streets to the next trailhead. (They can be a bit hard to spot, however, so here’s what you’re looking for.)
Signs at each trail entrance tell you not to wear high heels (darn!), but you also don’t need tricked-out hiking gear for this hike, either. I’ve seen teens wearing rubber flip-flops on the trail, and I wouldn’t advise that, but a decent pair of comfortable hiking shoes, hiking sandals, or even tennis shoes is adequate. The main thing you want to be sure of is that your shoes have good grip, and you aren’t breaking them in on the Cinque Terre trail.
Another thing to keep in mind is that, since the hike alone can take you nearly five hours (and that’s not including time spent in each town devouring sustenance and generally soaking up the atmosphere, or stopping at the beaches along the way, both of which are highly recommended), it’s a very good idea to start hiking as early as possible in the day. This is good for two reasons – first, you’ll avoid hiking in the hottest parts of the day; and second, you’ll potentially avoid most of the crowds of late risers.
In addition to the popular cliffside trail connecting the five towns (called the Blue Trail), there’s a much more challenging trail further inland (called the Cinque Terre High Trail) as well as a trail which links each town’s sanctuary (called, appropriately, the Sanctuary Trail). I’ve broken the Blue Trail down into the four separate sections below, and then listed the High and Sanctuary trails after that.
>> Note that sometimes due to weather and other environmental factors, portions of the trail are closed for maintenance or repair. You can check the current status of which trails are open on this official Cinque Terre park website. 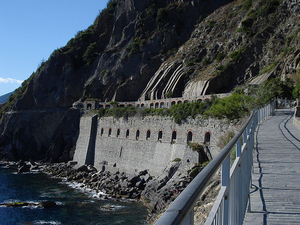 This section of the Cinque Terre trail is often referred to as the “Via dell’Amore,” an Italian Lover’s Lane. It’s the easiest portion of the trail by a long shot – so much so that I hesitate to even call it a “trail.” It’s flat and paved, so don’t be surprised if you see families on this path pushing strollers between these two towns. This stretch of the “trail” also comes by its nickname honestly – smooching with your sweetheart is almost impossible to avoid, and colorful love notes are scrawled all over the place.
If you aren’t engaging in copious amounts of strolling, meandering, or lolly-gagging, the “hike” between Riomaggiore to Manarola shouldn’t take you more than 20 minutes. 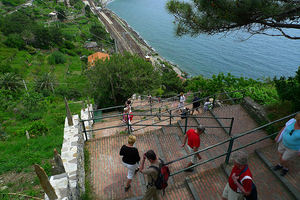 The trail north out of Manarola will, at first, be similar to the Via dell’Amore trail you just left. It’s mainly flat, although no longer paved, and makes for pretty easy going. Easy, that is, until you get within sight of Corniglia. That’s when you realize that unlike the other four towns, Corniglia isn’t at sea level. It’s up on top of a cliff – the keyword there is “up.”
As you get closer to Corniglia you’ll be walking alongside the train tracks, which are between the water and the trail. Then, at the train station at the base of the hill (on top of which is the town), there is a set of switchback stairs. Someone counted – there are more than 360 steps to get to the top. If an Italian stair-master isn’t what you had in mind for your vacation, however, you can take the easy way out and opt for the shuttle bus which is to the right of the station.
The hike between Manarola and Corniglia should take less than an hour, unless you require lots of breaks on the stairs. 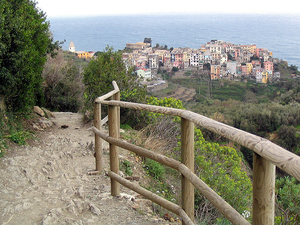 Because Corniglia is at the top of a hill, no matter which way you come from you’ll have to head upward at some point. On the flip side, however, that also means whichever way you’re going when you leave – you’re going down.
The trail from Corniglia to Vernazza heads gradually downhill for the most part, although there are some seriously steep sections. Parts of the trail are made up of irregularly-shaped stone steps which require a bit of attention when you’re walking. Not only that, this is where the trail begins to seem precarious – it can get extremely narrow at times, and in some areas you’ve got a wall of vineyards or other vegetation on one side and a cliff on the other (with no railing, I might add).
It’s at this point when you start to wonder what it’ll be like to pass someone coming the other way. (Answer: Don’t worry, the Cinque Terre is plenty crowded – you’ll find out soon enough.) Oh, and once you get to Vernazza, there is a series of very steep switchback steps leading down into the town itself, so don’t start celebrating your arrival too early.
The hike between Corniglia and Vernazza can take between 1.5-2 hours, barring too much pulling out in the passing zones. 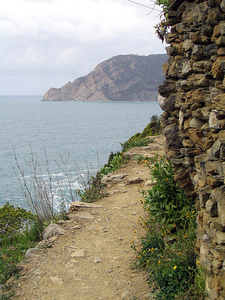 The most challenging hike is easily the one from Vernazza to Monterosso, mainly because it’s not just up or down – it’s both. And it’s steep. It’s also the one with the highest percentage of so-narrow-you’re-not-sure-they’re-wide-enough-for-one-person trail sections (many of which have cliffside dropoffs on one side), so be prepared for lots of stopping and starting if the trail is particularly crowded. The good news is that those gorgeous olive orchards and vineyards you started seeing in the last trail segment are even more plentiful in this one, and you’ll even dip inland now and then and be bathed in cool forest-y shade. (This is especially refreshing if you’re hiking during the heat of midday in the summer.)
Again, if you’re not doing too much in the way of stopping and starting, the hike between Vernazza and Monterosso should take roughly 1.5-2 hours. 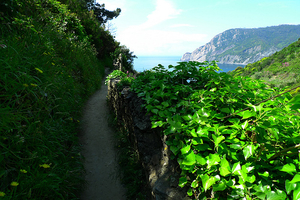 If you’re a more serious hiker and you want more of a challenge (not to mention wanting to get away from the crowds), then have a go at the High Trail. This route actually stretches beyond the Cinque Terre and connects the towns of Portovenere in the south with Levanto in the north. The hiking time alone is estimated (depending on what you read) between 6-10 hours, and the paths are not nearly as well marked as the route described above, so it’s highly recommended that you either pick up a detailed hiking map of the area or you hire a local guide to lead the way.
Should you get partway into the High Route and decide you’ve had enough, no worries – there are lots of trails which connect the High Trail with the Cinque Terre towns, so you can cut your serious trekking short along the way and choose to spend the remainder of your day sipping the local dessert wine in a bar. No one will judge you. 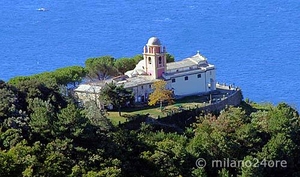 Each of the Cinque Terre towns has a sanctuary (also called a church or shrine) which is typically in the hills above the town center, and there are trails which connect each of these as well. You can get to these trails from either the main Blue Trail or the High Trail – you can even hike up to each shrine without starting on either the Blue or High Trail, from each town center.
Again, because these trails are less popular they’re also less well-marked. Get a good hiking map of the area, and ask at the tourist office if you can’t find the starting point.