Hostels Near the Colosseum in Rome 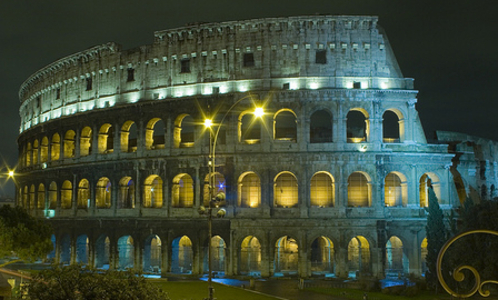 I’ve said before that there’s a huge cluster of hostels around Termini Station in Rome, and although there are also hostels away from Termini, I’m sure you won’t be surprised to learn that there aren’t a ton of super-budget accommodation options right next to the city’s biggest attractions. And even if you’ve scored a deal on your airline tickets to Rome that doesn’t mean you’ll want to pay too much for your bed.

In particular, you’re going to need to pay more than hostel rates to get a room near the Colosseum. Still, there are a few hostels that aren’t too far from the Colosseum – they are, in my book, close enough to be considered walking distance. Here, then, is the select list of hostels near the Colosseum in Rome.

>> And if you’ve got a little more money to spend, here are some budget hotels near the Colosseum, too!

Hostels Near the Colosseum

This Rome map has the Colosseum marked, along with the hostels which are featured on the list below. Now you don’t have to wonder what “walking distance to the Colosseum” means – you can see it! You can hover over each hostel icon to get more information about it, or read more in the listings under the map. 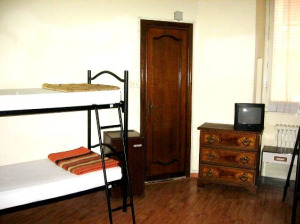 There’s no curfew at the Ivanhoe Hostel, but there is a midday lockout for cleaning from noon until 16:00. Breakfast and dinner are both available for a small fee, but bed linens, internet access, and WiFi are all available for free. You’ll need to bring your own towel.

Prices at the Ivanhoe range from €20 for a dorm bed in the low season to €28 in the high season.
>> Book Ivanhoe Hostel in Rome 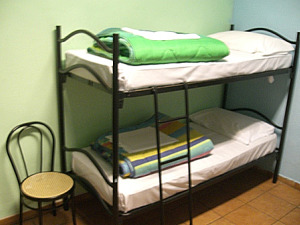 Roma Inn Hostel is just down the street from Ivanhoe, so also very close to both the Colosseum and the Cavour Metro stop. The dorm walls have been covered with murals by the hostel’s resident artist, and the hostel staff lead pub tours of the city.

There’s a midday lockout period for cleaning at Roma Inn from 11:30-16:00, but the reception desk is open 24 hours a day and there’s no curfew. Bed linens, internet, and WiFi are all offered for free – but you’ll have to pay a small extra fee to get the hostel breakfast or dinner. 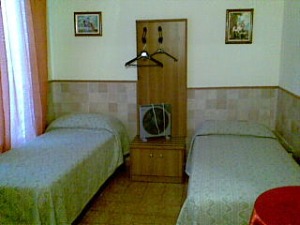 The Victoria Hostel is part of a larger accommodation group in Rome, including a few hotels and a B&B, several of which are located in the same area. They’re so connected, in fact, that the hostel’s free internet access is actually something you need to go to the nearby Cristina Hotel to take advantage of.

The hostel is located a few minutes’ walk from the Colosseum on Via Cavour, and close to the Cavour Metro stop. Bed linens are free, but breakfast and towels are not. There’s no curfew at the hostel.

A dorm bed will cost about €15 in the low season and €22 in the high season.
>> Book Victoria Hostel in Rome 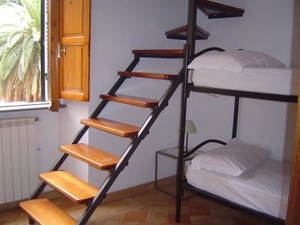 The Mona Lisa Hostel is just a bit further away from the Colosseum than the hostels listed above, but it’s within a stone’s throw of the Quirinale Palace (the Italian president’s residence) and still not far to walk to the Colosseum. It’s a smaller hostel, so not a party spot – but definitely friendly.

There’s both a curfew (03:00) and a midday cleaning lockout time (11:00-16:00) at this hostel, so keep that in mind. Bed linens and internet access are available for free, but meals and towels aren’t. You can rent a towel, and breakfast and dinner both are available for a small fee. 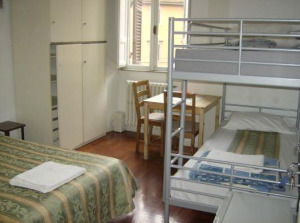 The Bavaria B&B & Hostel isn’t really a genuine hostel. In fact, putting this “hostel” on the list is a bit of a cheat, because they’ve primarily got private rooms. There are a couple rooms which have bunk beds and space for up to five people, and most of the rooms share bathrooms. But this really is more of a B&B – or a super budget hotel – than a hostel. Still, the prices are much lower than at most hotels in the area, and since there’s a distinct lack of hostels in this area I’m leaving on the list.

Bavaria B&B & Hostel is about halfway between the Cavour Metro stop and Termini station, so it’s also the furthest place on this list from the Colosseum. As you’d guess from a B&B, bed linens, towels, and breakfast are all included with the room price. Internet access and WiFi are also available for free in the lobby.