How I Fell in Love with Naples 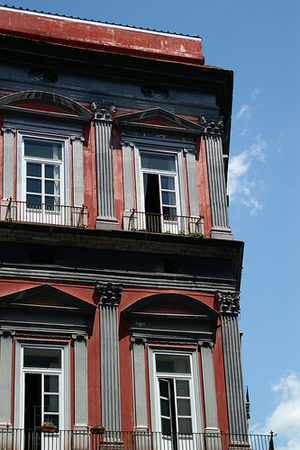 Brace yourself, I’m about to get all emotional about a city in Italy.
You’ve heard me positively gush about Venice, a city I can’t ever seem describe my deep and abiding affection for, and you may have wondered if there’s a city in this country that I don’t like (answer: Not that I’ve found so far). But I was fully expecting to come back from my trip to Naples last week thinking, “Well, that’s one city that has a few redeeming qualities, but I don’t mind not going back anytime soon.”
Oh, how wrong that assumption would turn out to be.
In short, I loved Naples. I loved it immediately, and was shocked by that. I concentrated on the old historic center, which is one of the reasons I loved the city, but the intensity with which I loved it is what surprised me most.
Some of the things I noticed and loved right away: 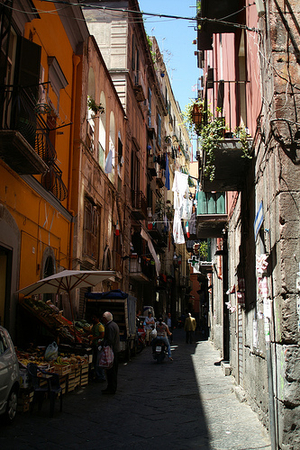 Naples is absolutely real-life Italy. Yes, the historic center is just what the name suggests – it’s old, it’s historic, and it could easily be considered something of a museum piece. But it’s not a museum piece – far from it. It’s a living, breathing place where modern-day Neapolitans live, work, and shop just like people have done for centuries. The tiny lanes bustle not with tourist crowds but with locals picking up the ingredients for dinner, household cleaning supplies, or something from the hardware store. There are touristy shops tucked here and there, but for the most part the shops are absolutely not catering to visitors.
This is a city that doesn’t slow down for anything or anyone. People in the Italy tourism industry kept telling me they miss the Americans and wish more people would come back to see their city, but most of the locals in Naples aren’t in the tourism industry and they can seem like they couldn’t care less whether you’re there to spend money. There is no red carpet laid out for outsiders. And yet nearly every time I engaged in a conversation with someone I was met with instant warmth and openness, which I certainly don’t find everywhere I go in Italy.
Naples turns up the volume on everything. I mean this literally and figuratively. The city, as a friend said, seems to be the very definition of decadent – in that it’s decaying, but really doesn’t seem to care. It’s noisy – the cacophony can be jarring. Cars and scooters honk their horns all the time, people yell to one another across streets and from window to window. It’s incredibly crowded. Naples as a whole is the most densely-populated city in Europe, and when you’re trying to walk through even the old center you’d swear every Neapolitan lives right there. 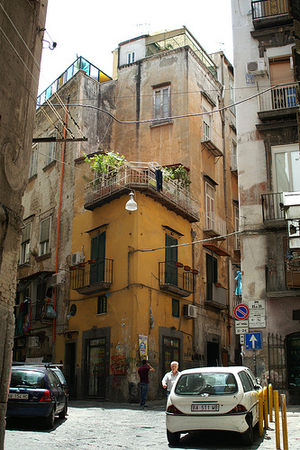 But although locals have what seems like a devil-may-care attitude toward their ancient and beautiful surroundings (and even more toward the outsiders who come to see them), the citizens of Naples take some things very seriously, indeed. Primary among the things Neapolitans treat with the utmost respect is their food. To say that pizza was born here is an understatement – pizza and the crafting of it is, in Naples, almost a religion. But the love of food in this city doesn’t stop with its most famous export.
You’ll find more “take-away” fare than in many other Italian cities, and you might assume that means the locals are just filling their stomachs with junk. They’re not. The Naples version of take-away food may not be terribly healthy (a huge percentage of it is deep-fried), but it’s made with the same high-quality ingredients and care as anything you’d sit down to eat. What’s more, while people may not be dining at a restaurant table, they’re still not eating on the run – what they’re consuming still takes precedence over anyplace they might need to go. That paper-wrapped pizza fritta (fried pizza) is typically eaten standing or sitting around a piazza with friends.
With all this chaos, all the noise, all the decay, and all the people, Naples is an assault on the senses. It’s easy to understand why tourists feel unprepared, bombarded, and ill-at-ease. The stories of jewelry theft and purse snatchings are rampant and real, and there is a serious problem with organized crime. But there is also no reason why visitors should shy away from Naples, as long as they approach it with the right attitude.
The city is intensely real, which can be a challenge. I think most tourists, especially American tourists, probably won’t spend more than a day in Naples or use it as a base from which to explore Pompeii, no matter what travel guides say. One guidebook I read even recommends using nearby Sorrento as a homebase and visiting Naples just for the day. But if you ask me, Naples offers extremely nice rewards to those who take the time to get to know her.
So – are you up for the challenge?
Photos in this post are by Jessica Spiegel & may not be used without permission. You can see the set of my Naples photos on Flickr.