How to Get from Naples to Sorrento (and Vice Versa) 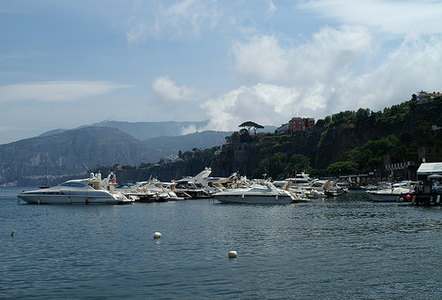 However much I might advocate for staying at least a couple nights in Naples before you head for points more coastal or island-y, I know that Naples probably isn’t for everyone. I also know that even if you’re taking my advice and staying in the city for a few days you’re probably going to need a sunny break.
Either way, the good news is that getting from Naples to Sorrento is quick and easy. So quick and easy, in fact, that it’s possible to do something as seemingly frivolous as zip to Sorrento for lunch. I know, because that’s what I did one day. It seriously felt like I should be saying, “Oh, I’m having lunch in Sorrento” with an aristocratic accent while sipping a fancy cocktail and sitting on my private yacht…
Luckily, you don’t have to be rich or elegant or famous to pop over to Sorrento from Naples for lunch.
While it’s not technically part of the renowned Amalfi Coast, Sorrento has many of the same perks and it’s a much quicker journey from Naples to Sorrento than it would be from Naples to Amalfi or Positano. The two easiest transportation options are rail and boat, but in my opinion one of those wins clearly over the other. Read on to find out which method of transport I’d recommend.
>> Spending the night in Sorrento? Here are some cheap hotels in Sorrento, and some Sorrento hostels for the more budget-minded.

Taking the Train from Naples to Sorrento 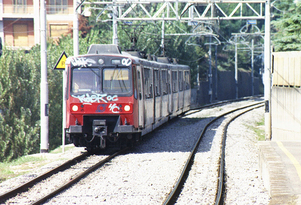 Sorrento might feel like a sun-soaked island paradise when you’re there, but it’s very much on the Italian mainland – and so therefore easily reached by the Circumvesuviana train which runs from Naples along the coast. Between Naples and Sorrento (depending on the train you choose), stops include Herculaneum and Pompeii, as well as several other coastal towns.
Trains from Naples to Sorrento leave from the main station (Stazione Napoli Centrale on Piazza Garibaldi) about every half-hour between 06:00 and 23:00 every day, and the journey can take between 45 minutes and 1.25 hours (again, depending on the train). If you want the quicker trip, trains marked “direttissimo” are quicker than the “diretto” trains because they make fewer stops along the way. Also note that the part of Napoli Centrale that’s dedicated to the Circumvesuviana is downstairs from the regular trains.
You can buy tickets for the Circumvesuviana from a ticket booth or an automated machine, and a simple one-way ticket will cost you less than €4. If you’re making a day-trip of it and will be returning to Naples later on the same day, ask at the ticket booth about buying a ticket that’s basically a day-long pass which will allow you to return to Naples anytime before midnight. It’s more than the one-way ticket, but less than buying two separate one-way tickets would be (around €7 as of this writing). And if you’ve bought the ArteCard Campania for your stay, it includes transportation on the train.
While taking the train to Sorrento from Naples is probably the cheapest option, it’s not the one I’d recommend. The Circumvesuviana train features in so many stories of tourists getting their pockets picked that even if only half of them are true, it’s still an alarmingly high number of pickpockets who frequent those trains. If you do opt for the train, just make sure you’re wearing your money belt in a secure way (because you’re a smart traveler and have one, right?) and that you’re paying special attention to your bags and belongings.
The Circumvesuviana website isn’t the most helpful on earth, but if you’re dying to see it it’s here.

Taking a Boat from Naples to Sorrento 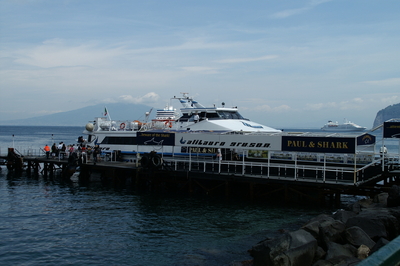 It’s not just because the Circumvesuviana train is notorious for pickpockets that I recommend taking a boat from Naples to Sorrento instead. It’s also because it’s faster and a great way to get a view of Naples and Mt. Vesuvius from the water. Taking the trip via the water is more expensive than going by train, but it’s probably not prohibitively expensive for most travelers – and you have a couple options when it comes to water transport. 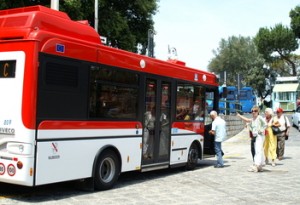 With any of these, you’ll have to either hike up the hill to Sorrento’s city center, pay for a taxi (they’re plentiful around the pier but can be overly expensive), or take the bus. Buses don’t run as frequently as you think they should, and the short ride one-way will cost you €2. If you’re both lazy and a penny-pincher, I recommend taking the bus on the way up and walking back down!

Taking the Bus from Naples to Sorrento

If you’re flying into the Naples Airport, bypassing Naples entirely, and want to get directly to Sorrento, there’s a coach service that goes from the airport to Sorrento. It’s provided by Curreri, and it’s €10 one-way. It’s about a 1.25-hour trip, and runs every day (though the frequency and departure times vary with the season). The Curreri website is here.
If you’re not flying into Naples, however, getting from Naples to Sorrento by bus is kind of impossible. I mean, you could do something like take a bus from Naples to Amalfi or Positano and then catch a bus from there to Sorrento, but that’s no way to spend a day. So unless you’re close to the airport and can get one of the Curreri coaches straight to Sorrento, scroll back up the page and catch the train or a boat instead.

Driving from Naples to Sorrento 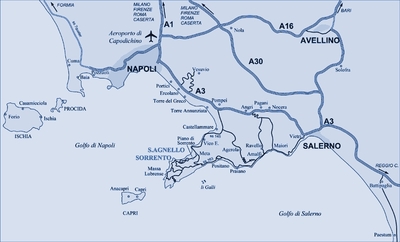 You might think that driving along a coastline like the Bay of Naples would be fun and picturesque, and in some places that’s true. But the roughly 50km (30mi) trip is primarily on highways that are further inland (so you’re not really winding along coastal roads) and notoriously busy (so you’re likely to be stuck in traffic). It doesn’t look like a long trip on paper, but it’s a little unpredictable how long it’ll take – especially on weekends in the summer when it’s not just the tourists who are headed for the beaches but the locals as well.
To drive to Sorrento from Naples you’ll take the A3 motorway (a toll road) in the direction of “Salerno-Reggio Calabria” until you get to the exit for “Castellammare di Stabia.” This is when the drive will start to get pretty and potentially very frustrating, because you’ll be winding your way along the “Statale 145” peninsula road (also known as “La Sorrentina”) following signs to Sorrento.
There are several parking areas in Sorrento, all of which will cost you varying amounts, so you might not want to pull into the first one you see. If you’re staying the night in Sorrento, ask the folks at your hotel whether they have a recommendation of a parking area to use (and if they’ve got a dedicated parking area, even better). And don’t forget to read up on how to drive in Italy before you hit the road.

Now that you’re in Sorrento…

You might find this information helpful for your Sorrento visit.