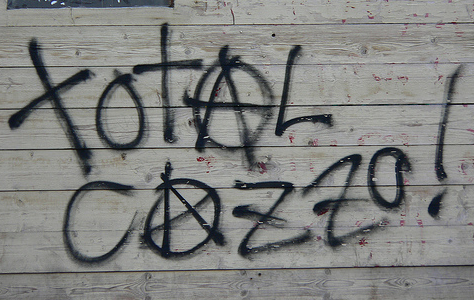 You probably remember my original Italian swear words list, where I told you my favorites – and also the list that followed of your favorite Italian curse words… But when you’re talking about colorful ways to say nasty things in Italian, is two lists really enough?

So when I heard that travel writer Leif Pettersen was headed back to southern Tuscany to update the Lonely Planet guidebook, I sent him a note saying I’d love to add more Italian swear words to my vocabulary. Thankfully, he found a few Tuscans who were more than willing to suggest a few.

cornuto
kohr|NOO|toh
Leif says that literally this means “you have horns,” but is typically used to indicate that one’s spouse is cheating on them. The English have a similar word for this, “cuckold,” which hasn’t made it into common American-English usage. The English version is for men only, but the Italian one – although usually used for men whose wives are cheating – is gender neutral. And in case you want to give someone the hint about an unfaithful spouse without uttering a sound, there’s a gesture for this one, too – as Leif puts it, “you make the ‘I worship the devil’ sign with your hands at the same time, index and pinkie up, palm front.”

porco giuda
POHR|koh JU|dah
In the long tradition of adding “porco” to the front of just about anything and thereby turning it into a swear word (oh, the poor pig), Leif says that this one – which is translated as “judas pig” – is the favorite curse word his host in Tuscany used when stuck in traffic. I’m quite confident it has many more uses besides that as well.

divoratore di stronzi
dee|vohr|ah|TOH|reh dee STROHN|zee
Evidently, Leif was sitting with the man of the house, getting suggestions for Italian swear words for me, when the man’s wife waltzed in from the other room, offered up “divoratore di stronzi” as her contribution, and promptly left. Leif was told it means “shit eater,” but when I asked about when one might actually use such a delightful phrase, he said the wife didn’t stop long enough to explain that part. 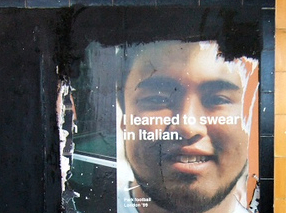 Thanks to Leif for collecting these gems and keeping the Italian swear words thread alive here at WhyGo Italy!