Men in Rome Take Off their Pants 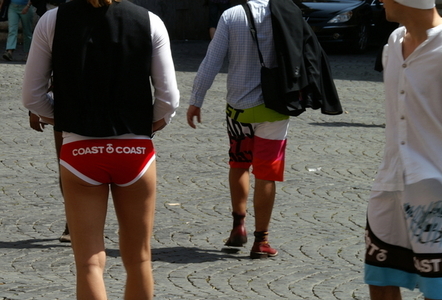 On my only full day in Rome this past weekend, I strolled aimlessly through the neighborhood my B&B was in trying to decide where I wanted to go. In the end, I ended up going back to the Trastevere neighborhood. The reasons why I chose to revisit the Trastevere are completely unimportant now, because after I had a light lunch and enjoyed some of the best gelato in the city, I happened upon a group of young Italian men taking their clothes off.
Yep, you read that right.
I was just finishing up the last few spoonfuls of my gelato in Piazza Santa Maria in Trastevere, my camera turned off and hanging lifeless around my neck, when a group of well-dressed young men walked into the square. Some were carrying leather briefcases, while some were wearing yellow safety vests over their nice shirts and ties. But I didn’t really pay much attention to them, frankly, until a cheer went up from the crowd and all of them removed their trousers as if in cue. 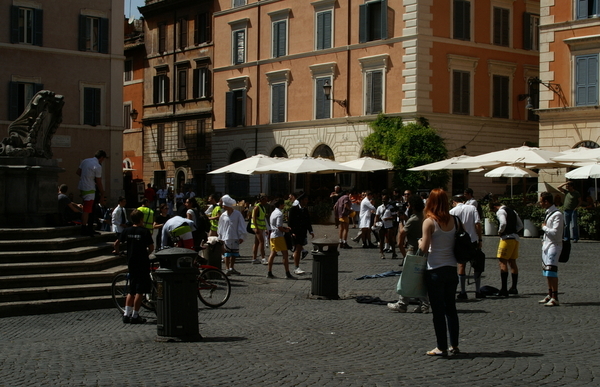 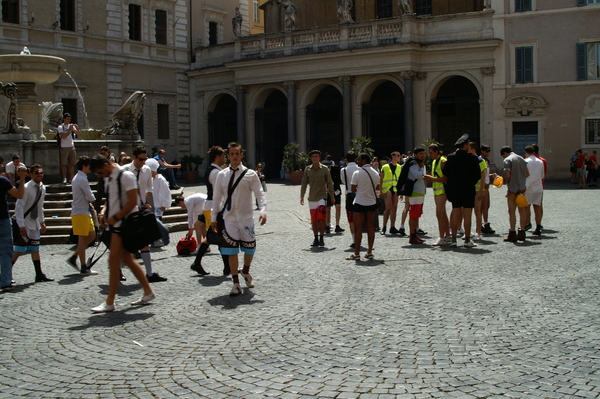 Now, before you get too excited, I’ll quickly follow that sentence up by telling you that trousers were the only things removed. And underneath their pants, many of them were wearing knee-length swim trunks. Others, however, were wearing colored versions of “tighty whities,” complete with some kind of logo splashed across their backsides. And whereas they more or less looked the same when they walked into the piazza in terms of their dress, now they appeared to be grouping themselves by costume. 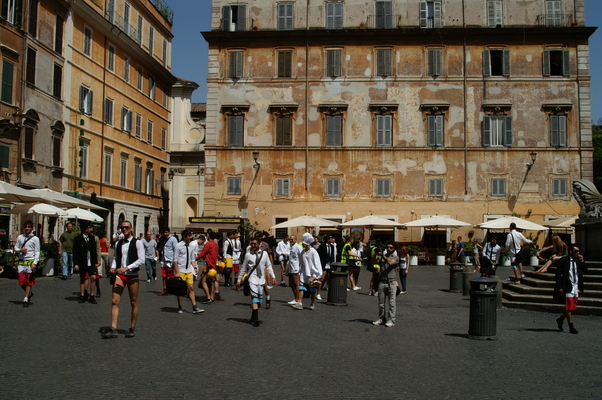 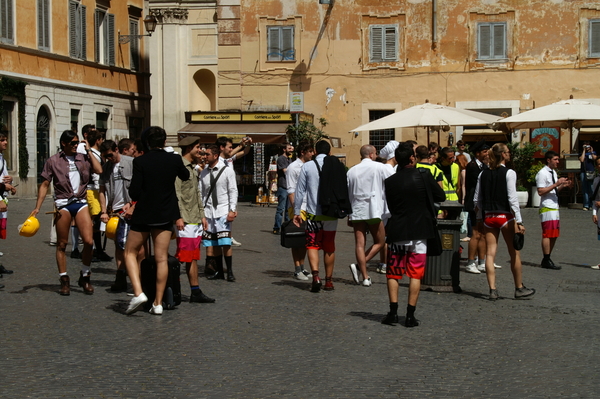 You can see the chef’s hat to the right-center of the photo, and a group of “construction workers” on the left. 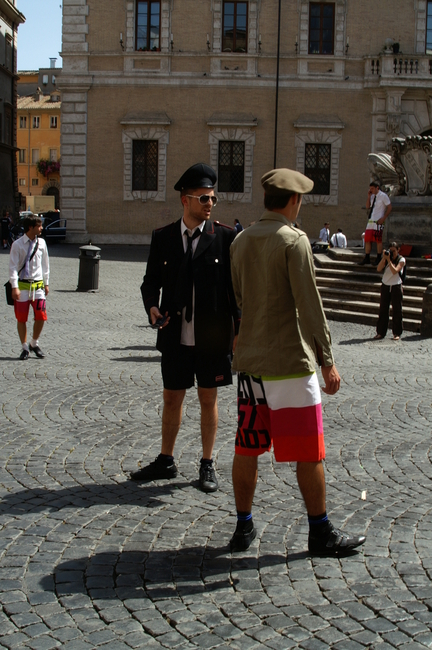 Here’s a pilot chatting with, I dunno, some sort of military guy?
There were some wearing pilot caps and jackets and pulling small rolling suitcases. There were some wearing long white lab coats. There was one I noticed wearing a tall chef’s hat. My favorites, and the ones who made it look more like an audition for The Village People than anything else, were the ones wearing bright yellow construction hard hats, work boots, and toolbelts. I mean, how fabulous is this? 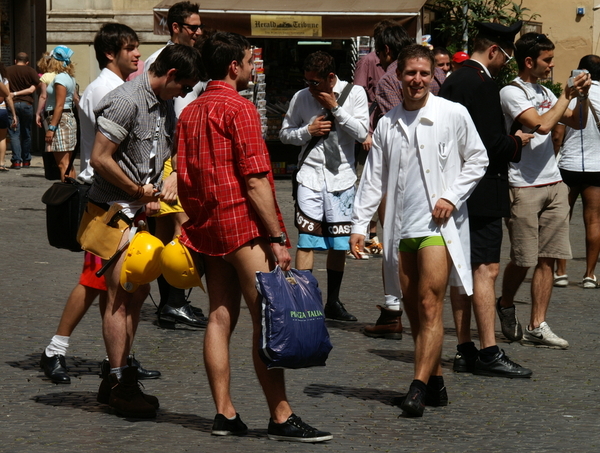 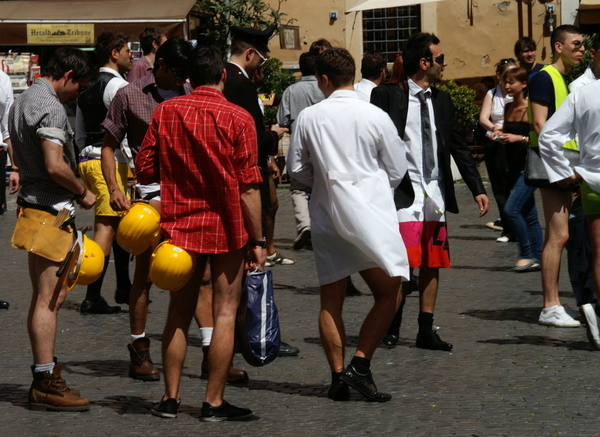 It wasn’t until I looked back through the photos I took (oh, yes, I slurped down the rest of my gelato subito and fired up the camera) that I noticed the words I’d seen written on the behind of one of the trouser-less men was on the shorts or underwear of every single guy in the group. Until I did a little digging online while writing this post, I had assumed it was perhaps a graduating group of some kind, and they were wearing uniforms that had something to do with the careers they’d be going into. Well, that’s not at all what was happening. 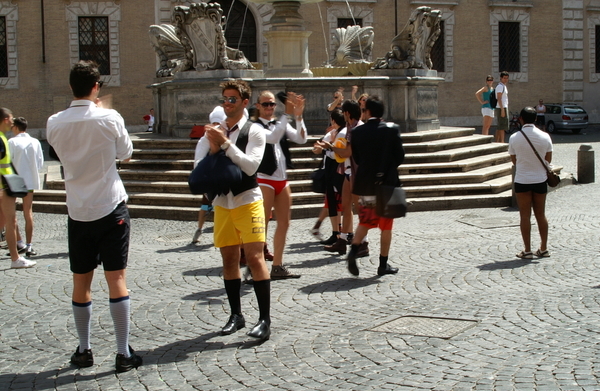 We took off our pants in public! Yay for us! Yay for you!
Each man’s rear (or leg, if he was wearing long swim trunks) said “Coast to Coast,” which it turns out is some kind of cross-country mountain-biking race from one coast of Italy to the other – from the Tirreno to the Adriatico – which begins on May 30th and goes until June 2nd. It’s no ordinary race, however, and even the website has dubbed it “Die Hard Tour 2009” (in English, no less). Why? Because participants will ride from one coast to the other – more than 300km – in the first day. On day 2, they’ll turn around and ride more than 170km to get most of the way back, so that on day 3 they’ll only have over 160km left to go. 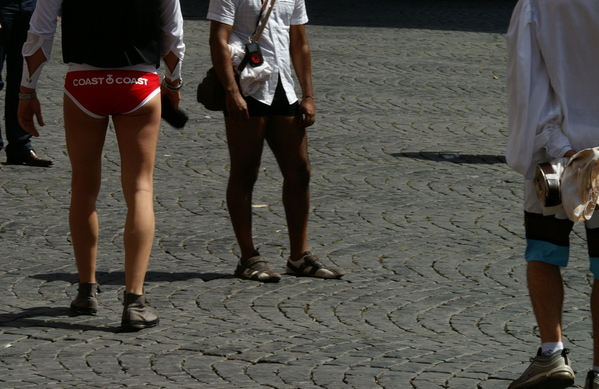 So, those guys in the Piazza Santa Maria in Trastevere weren’t just crazy enough to disrobe in a busy Roman square, they’re crazy enough to ride mountain bikes back and forth across the country in a few days.
I still don’t understand the costumes – I mean, are they going to wear them on the bikes, or was that just for some weird team affiliation in photos? – but I don’t mind being in the dark about that. The view in the piazza sort of made up for any confusion I might now be experiencing.
Either this particular construction worker isn’t used to wearing tight undies, or these were just not cut right for him. I love how he uses the toolbelt to disguise the fact that he’s pulling his underwear out of his butt. 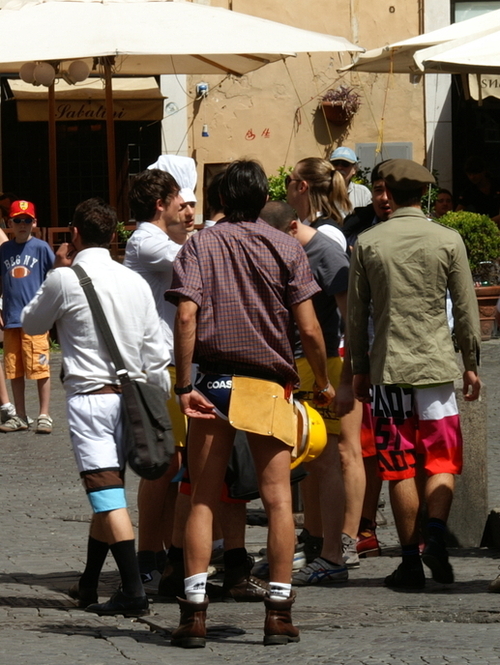 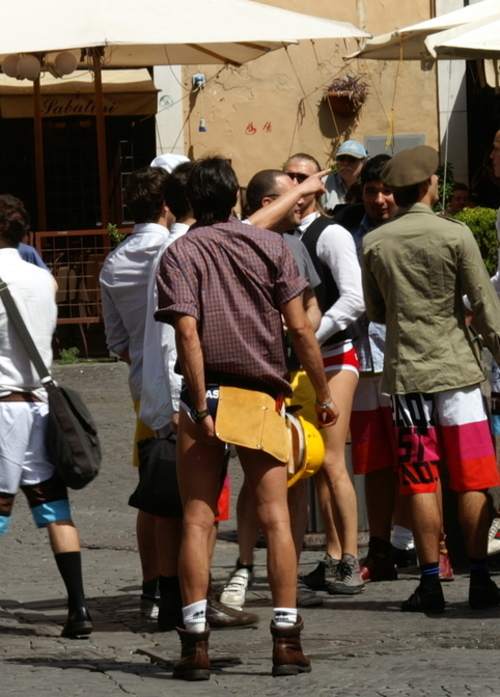 photographs by Jessica Spiegel, all rights reserved & may not be used without permission