Along with the foodie meetup I attended in Rome, the other event which helped me decide I had to visit Italy at this time was a soccer game. You may recall that I saw two Italian football matches when I was here in 2008, watching my beloved AC Milan team at the massive San Siro stadium first squeak out a tie and then lose the second game I saw. Still, despite the results, it was great fun just being there live and in person to see the games I watch on TV back home. 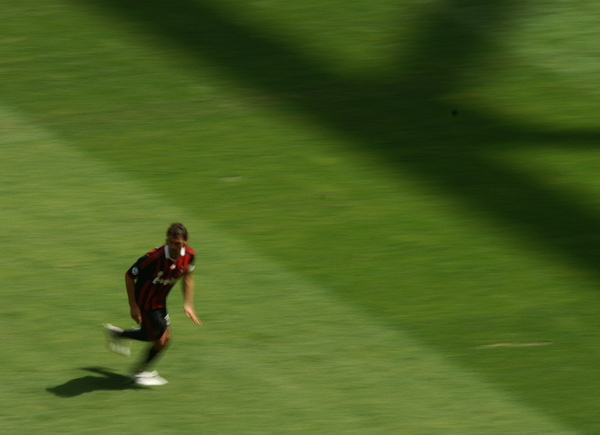 Maldini in action
But this game, the one that I was determined to see this time, was no ordinary Italian soccer game. It was the final home game of AC Milan’s longtime captain, Paolo Maldini, who is retiring this year at the age of 40 (he’ll be 41 next month). His career is sprinkled liberally with trophies and awards and records, but for me the thing that stands out most is that he played his entire career – 25 years – with the same team. Almost no one does that anymore. He was injured for both of the games I saw last year, so I felt like this was unfinished business: I had to see him play before he finally hung up his boots. 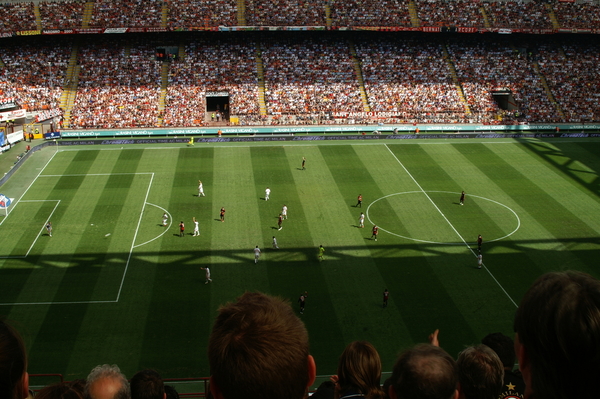 Sadly, my dear Rossoneri lost the game (2-3 to Roma), so I still have never seen them win a damned game in person (I would suspect I’m some kind of bad luck charm and say I should stop going to games, but they’ve lost plenty of matches when I’ve been an entire ocean and continent away, so it ain’t my fault), but it was absolutely thrilling to be there for this special game anyway. The Stadio San Siro was packed, nearly to capacity, and it was loud. I took a few short videos, and a gajillion pictures, but I was sitting pretty high up so I’m posting my videos along with a couple others I found of the more close-up shots. 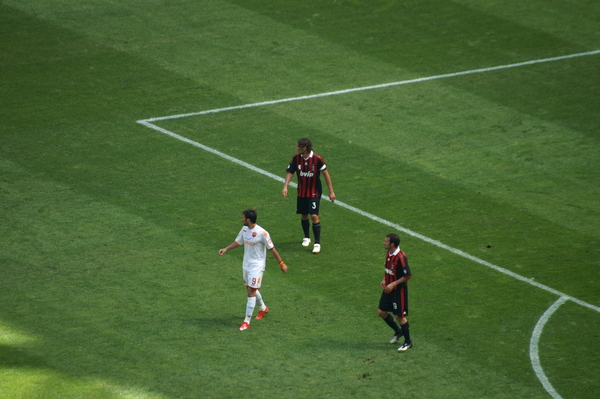 Vucinic, Maldini, & Favalli
Most people had bought special scarves for the game, which were white with Maldini’s name on them, and many people were also wearing T-shirts with his picture and the word “Grazie” on it. Maldini’s father was on hand to witness the historic event (his father was also a Milan player and captain, and then a coach of the national team – to Paolo), as were other family members, and even the Roma squad was honoring Maldini on Sunday – before the game, the entire Roma team was wearing T-shirts that said, “Grazie Paolo, Grande Capitano” as they walked onto the field. 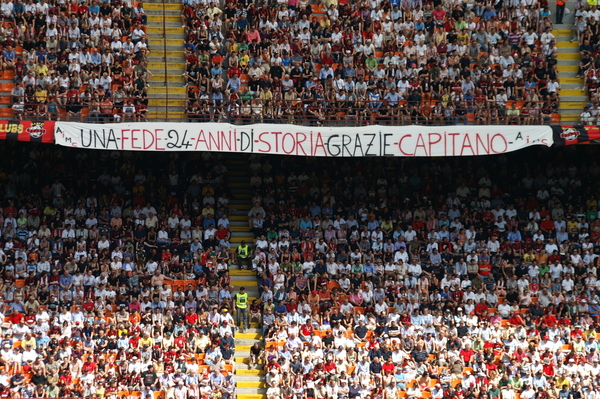 I’ve read a few things since the game about Milan fans being disrespectful to Maldini after the game, as he did a “victory lap” (nevermind that they didn’t win, it’s a victory lap anyway) around the pitch. Honestly, at the time I didn’t notice anything. Partly that’s because I have trouble understanding football chants in Italian (well, except for one that’s really easy to understand), and partly that’s because I still have an American knee-jerk reaction to thinking whistling is a positive thing. In Italy, whistles at sporting events are the equivalent of boos. I didn’t hear booing during Maldini’s lap, but after looking at my videos again I heard a few. They were minimal in comparison to the wild applause, so I’m surprised they’re getting as much media attention as they are, but there was also a banner the Ultra (the hardcore fans) unfurled at one point that basically said, “Thanks for your glorious 25 year career, even if you did call us mercenaries and misers.” 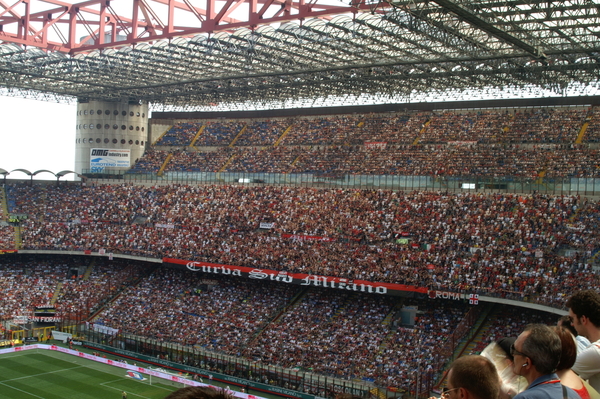 I’m not sure what the specific story there is, but in Italy much of the time the Ultra get special privileges – like free tickets to games – and Maldini may have called them mercenaries at one point when they asked for more. Whatever the story is, I agree it wasn’t a very classy way to send off a player who’s been a role model and a stand-up human being for your club for a quarter-century… But it was also only a handful of people in a crowd of nearly 80,000. So I’m willing to write them off as jackasses and leave it at that.
>> I did a bit more reading about this in the Italian press, and evidently some of the Ultra feel like there were times in the past when Maldini “failed to show respect” to them. Which sounds pretty ludicrous to me. But what’s more troubling is that Maldini himself says that the team didn’t defend him against the insults on Sunday. Milan’s managing director has taken the blame for the silence on the part of the club, saying he didn’t want to “give further space” (presumably media space) to the people who whistled and unrolled the unkind banner at the game. He also said, “I’m under escort [i.e. he has bodyguards], as you know, for the past two years due to the behaviour of those persons who insulted you.” Now, doesn’t that make you feel great about the state of Italian football?
The Italian football federation president has said they’re “thinking about celebrating [Maldini] with a non-competitive match,” but I’m not sure what that means. I’m kind of thinking that this coming weekend, when Milan plays their final game away at Fiorentina, will be the last time we see the number 3 on the great Maldini’s back.
Grazie, Paolo, for your years of dedication. We’ll miss you.

Videos and Photos from Maldini’s Last Game at San Siro

The first four videos are the ones I took, and there’s a slideshow of some of the photos I took at the end of the article.
This video is from the introduction of the team before the game; the way these introductions work is the announcer says the number and the player’s first name, and then the crowd shouts the last name. This time, when they got to Maldini, the announcer listed his career achievements to uproarious applause.

Next, the teams come out of the tunnel onto the pitch to the Milan theme song playing throughout the stadium. The Roma players were wearing those “Grazie Paolo” shirts in the tunnel and the lineup at the edge of the field before the game.

This is from after the game, when Maldini did his “victory lap” around the field.

The last one’s short, just of some of the team hugs and handshakes after Maldini’s “victory lap.” It’s in this video you can hear a few whistles.

Here’s an overview of the game’s “highlights:”

Nevermind that this one’s not in Italian or English; it’s the close-up video of the hugs & handshakes after the game that I like. It’s in this video you can see how choked up Maldini’s teammates are.

I just found this video, put together by AC Milan’s YouTube channel, that totally gave me a lump in my throat. I feel so lucky to have been able to see this game…

This is a slideshow of some of the pictures I took at the game:

>> For more, there’s a great Q&A with Maldini here done before the game I saw, and an adorable picture of some of the kids sporting Maldini jerseys to the game. And thanks to Milanese Masala for joining me for the game!
photographs by Jessica Spiegel – all rights reserved and may not be used without permission