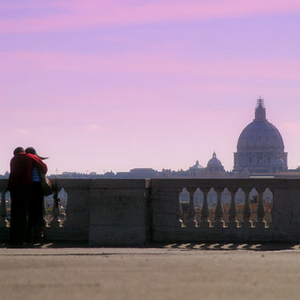 There are plenty of places on earth where it’s easy to imagine a romantic holiday or honeymoon, and others that require a little imagination to turn them into romantic destinations. Rome is a bit of both. It’s Italy, and just about anywhere in Italy is going to be romantic enough for a honeymoon – but it’s also a big and bustling city that doesn’t, on the surface, seem to have many of those quiet corners that are ideal for snuggling with your partner and pretending the rest of the world doesn’t exist. Rome isn’t really into letting you forget it exists.
Which is why, when you’re planning a romantic vacation in Rome, you need to make sure your hotel is doing everything possible to aid the atmosphere.
Of course, the words “romantic hotels in Rome” don’t exactly conjure images of budget-friendly rooms, do they? There’s a good reason for that. Romantic hotels are typically the ones with amenities cheap hotels could never dream of, personal service from attentive staff, and luxurious decorations. So on this list of romantic Rome hotels I’ve split them into two groups – reasonable splurges, and serious splurges.
The former group is for those of you who are normally budget-conscious travelers who stay in 2-3 star hotels but want to do something a little more special. You probably won’t fall over in shock at the nightly pricetags on these places. The latter group is for those of you who don’t generally look at the nightly pricetag to begin with. I’d advise you budget travelers not to look at those serious splurges, lest you spit whatever you’re drinking all over your computer. And I’m sorry, you serious cheapo travelers, there are no hostels in Rome on this list. The term “romantic hostel” just conjures up a totally different image, I think you’ll agree.
There’s a map of Rome below with a few attractions marked along with all the hotels on this list, so you can see just where they are in the city. To get more information about any hotel, just click on the icon on the map or scroll down to read a brief description about the hotel.

Hotel Bailey’s
via Flavia 39 – 00187 Rome
The Bailey’s Hotel in Rome isn’t too far from sights like Villa Borghese and the Spanish Steps, but it’s not priced in another stratosphere – especially when you’re considering what you get for your money. The hotel is in a 19th century former palazzo which has been converted into an elegant boutique hotel.
There are 29 rooms in the hotel, all of which have private bathrooms, A/C, satellite TV, and internet access. A full buffet breakfast is included with the room, and there’s an on-site bar where you can get a drink before bed. Room service is available from 07:00 until 23:00, if you’d prefer to take your meals in your room.
Beldes H.R.
via degli Scipioni 239 – 00192 Rome
The Beldes H.R. Guest House is the only one on this list on the Vatican City side of the Tevere, and it’s about 1km from St. Peter’s Square and very close to the Lepanto Metro stop. This is a new guest house in Rome, run by two young brothers who come from a hotelling family.
There are only 26 rooms in the hotel, so you can be assured of more personal attention from the staff. All the rooms have private bathrooms, A/C, satellite TVs, and free high-speed internet access. The rooms are beautifully decoreated in a French provincial style, there’s an on-site bar with a pool table, a private terrace and roof garden, and even a massage service. Oh, and breakfast is free, too.
Duke Hotel
via Archimede 69 – 00197 Rome
On the map above, the Duke Hotel is the one that’s the furthest from the historic city center – so it better have something going for it or who would trek all the way out there, right? When you arrive, you’ll understand. This is an elegant hotel that doesn’t make you feel like you should have used the servant’s entrance. It’s beautiful, but it’s not too beautiful, y’know what I mean?
There are 78 rooms in this boutique hotel, all of which have private bathrooms, A/C, satellite TV, and internet/WiFi access. Breakfast is free with the room, and there’s also a free hotel shuttle that runs to the Via Veneto between the hours of 08:00 and 21:45. There’s an on-site bar/restaurant and room service, and because most of the rooms also have a balcony or terrace, you can have a romantic meal on the balcony in your room if you’d like.
Stendhal Hotel Rome
via del Tritone 113 – 00187 Rome
I love the name of this hotel – the Stendhal Hotel – because it references the so-called “syndrome” wherein “victims” are overwhelmed by the beauty of something and fall ill as a result. How perfect for a romantic hotel in an overwhelming city! The hotel is near the Trevi Fountain, the Spanish Steps, the Villa Borghese, and some of Rome’s most fancy shopping on the Via dei Condotti – so finding a spot nearby for a romantic moonlit stroll shouldn’t be too much of a challenge.
There are 30 rooms in the hotel, all of which have private bathrooms, satellite TV and A/C. A continental breakfast is free with the room, and there’s an on-site library as well as a bar for evening drinks. The decor is modern without being cold, but the best thing about this hotel really is the location.
>> Book Stendhal Hotel in Rome

Hotel Lord Byron
via Giuseppe de Notaris 5 – 00197 Rome
One look at where the Hotel Lord Byron is on the map above and you’ll see that people aren’t staying here because of its central location. It’s anything but centrally-located. But it is a sumptuous boutique hotel that’s absolutely worth the taxi fare to and from the city center (because if you can afford this place, you’re not taking the Metro). One thing you’ll love about the location is that it’s on top of a hill, so you may end up with a stunning city view from your room’s balcony or terrace. And that’s pretty doggone romantic.
There are 32 rooms, all of which have private bathrooms, A/C, and satellite TVs. The decor is Art Deco, the bathrooms are replete with marble, there’s an on-site restaurant that’s quite good, and the hotel runs a free shuttle to get you into the city and back. And did I mention that there’s a doorman to greet you when you arrive? And he’s wearing white gloves?
The Inn at the Spanish Steps
via Condotti 85 – 00187 Rome
The name of this hotel should tell you something about its location – The Inn at the Spanish Steps isn’t just saying they’re near the famous Roman staircase. There are even rooms that will give you a lovely view of the stairs and the church at the top. But even if you don’t spring for those “rooms with a view,” you’re still a few steps away from not only the Spanish Steps but the hotel is located right on one of Rome’s most chic shopping streets. The location is tough to beat.
Not all the rooms in the hotel are in the same building, as there’s a nearby annex with some rooms in it. Some of the rooms have frescoed ceilings, some have fireplaces, and all of them come with private bathrooms, A/C, and internet access. Breakfast is included with the room, and the hotel has a roof garden which is ideal for breakfast or enjoying a drink as the sun sets over Rome.
Caesar House Residenze Romane
via Cavour 310 – 00184 – Rome
Not far from the Roman Forum is the Caesar House Residenze Romane – but not only is it across the street from the former center of the Roman Empire, some of the rooms even have views overlooking the Forum. This hotel calls itself a B&B, and with only six rooms you can kind of understand why. But it’s probably more accurate to describe it as a small boutique hotel.
Each room is individually-decorated and features high ceilings, private bathrooms, satellite TVs, A/C and internet access. You can have breakfast in the breakfast room or brought to your room for a more private experience. There’s an on-site bar/lounge, and you can even enjoy a soak in the Turkish bath or get a massage. But is there anything more dreamy than walking back to your hotel after a day sightseeing – only to open your window and watch the sun set over the Roman Forum?
>> Book Caesar House Residenze Romane
The Inn at the Roman Forum
via Ibernesi 30 – 00184 Rome
Run by the same group that brings you The Inn at the Spanish Steps, The Inn at the Roman Forum offers the same kind of perks. It’s basically around the corner from one of the most popular attractions in Rome but still makes you feel like you’re tucked away in a quiet part of the city that’s all yours. There are only 14 rooms in the hotel, all of which have private bathrooms (some with jacuzzis), satellite TVs, A/C and free WiFi access.
What this little hotel offers in its basement, however, is something you’re unlikely to find in every hotel basement. They call it the “Cryptoporticus” and it’s a part of the excavated Trajan’s Marketplace that dates back more than 2,000 years. So you can be excited about the hotel’s roof garden or the free breakfast and WiFi, but tell me about another hotel with a basement crypt. (Okay, so a basement crypt doesn’t exactly scream “romantic,” but you can ignore that the crypt is even there and the rest of the hotel is absolutely romantic. Just don’t tell your squeamish partner about what’s underground.)
>> And if you’re blowing your travel budget on one of these romantic spots, you might want to be even more careful about finding a good deal on airfare. Italy is notoriously expensive when it comes to airfare, but flights to Rome don’t have to make you go into debt. Do your research so you know what to look out for.
photo by Pensiero