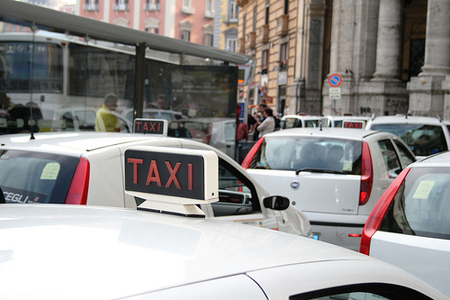 I’m beginning to think I could write a book – and not a short one, either – solely about taxi drivers in Italy. And contrary to what you might be thinking, I’m pretty sure I could do it without spending much time on the whole “taxi drivers in Italy rip you off” thing. In fact, I could probably cull together enough material that I wouldn’t have to spend any time on that subject at all.
Italian cab drivers are one rich vein of stories, I’m telling you.
To give you an idea of the kinds of things I might include in a book about Italian cabbies (are you listening, publishing world?), here are a few of my experiences just over the past month:

Are you a dancer? 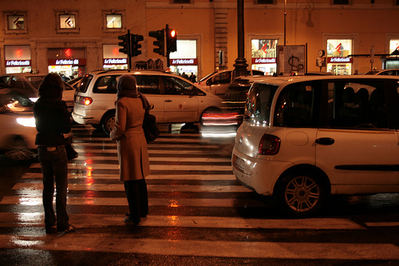 Generally speaking, the question, “Are you a dancer?” has very positive connotations – at least it does in my head. When I hear “dancer” I think “ballerina.” I think graceful, tall, thin, and poised. So when a taxi driver in Milan who had been totally silent for the first 10 minutes of the drive suddenly asked me (in Italian) whether I was, or was studying to be, a dancer my immediate reaction was to be flattered. A part of me knew it was probably some kind of pick-up line, as I am neither graceful, tall, thin, nor poised – but still, it was (I thought) a nice thing to say.
Until, that is, it dawned on me that a “dancer” in Italy is quite likely something else altogether. Not a ballerina, but rather a velina – one of those scantily-clad dancing girls that seem to be de rigueur on every Italian television show (news, talk shows, game shows, you name it). So, yeah. While it was probably still meant as a compliment, it was less about grace and poise than it was about big boobs and tiny clothing. That one gave me a good laugh when I finally realized my cultural misinterpretation, long after I’d left the taxi.

We miss the Americans. 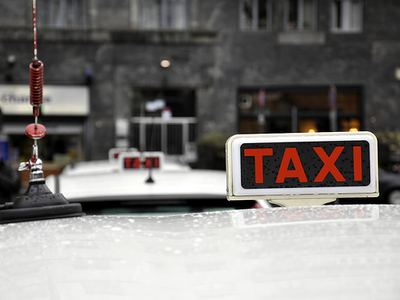 When I got into my first taxi in Naples, I have to admit I was bracing myself for being ripped off. I’d read the stories of cab drivers in Naples not using the meter, such that they made the cab drivers in Rome (also notorious for ripping off tourists) seem tame. But I got into a taxi anyway for the trip from the train station to my hotel in the old center.
My driver was extremely friendly, introducing himself right away and asking where I was coming from. To begin with, this was a bit unusual, since in my experience cabbies tend to be quiet unless you engage them first. When I told him I was an American travel writer he got even more chatty – telling me all about how much he loved his city. He told me that yeah, sure, it’s a bit crazy, and he didn’t have terribly nice things to say about the immigrants selling designer knock-offs on the sidewalks, but his affection for the city of his birth was obvious.
That’s when he said, “Please tell the Americans to come back. We miss the Americans.” Naples has been hit hard by not only the economic downturn but also a whole helluva lot of bad press lately. From stories of burning garbage piled up in the streets to the “Gomorra” book and movie putting a renewed international spotlight on organized crime in the area, Naples has been getting a bad rap. Setting aside any questions of whether it’s a deserved reputation or not, it was poignant and sweet to hear a proud Napolitano ask humbly for the return of American tourists to his city. Do him a favor and honor his request.

We were lucky this year. 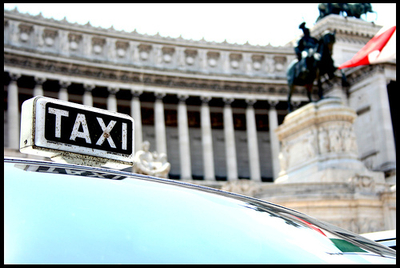 I struck up quite a long conversation with another Milan cabbie en route to the San Siro stadium to see Paolo Maldini’s last home game with A.C. Milan. I was, naturally, wearing my Milan scarf around my neck proudly (nevermind that it was 97F and I would later feel like I was on the verge of heatstroke), so he knew right away who I was rooting for. Now, while I generally have a strong dislike for all things Inter (as they’re Milan’s in-town rivals), I have to admit that I’ve yet to meet an Inter fan I didn’t like. I’ll allow that it may happen one day, and I haven’t met any of the hard-core Ultrá (and hope never to do so), but still. So far, I’ve had perfectly fine interactions with Interisti. I just can’t stand their team.
So when this particular Milan taxi driver and I were done talking about the weather, he confessed he was an Inter fan. I said, “Well, congratulations this year – again!” as his team had just clinched yet another Italian championship. Instead of being boastful, or bragging, or rubbing my nose in it, he very politely and graciously said, “Yes, well, we were lucky again this year.” I’m not sure I’d have been able to do the same thing in his shoes, but maybe I’ll remember that conversation when Milan finally wins another championship and an Inter fan congratulates me on my team’s success.

Have you ever been courted by a Neapolitan man before? 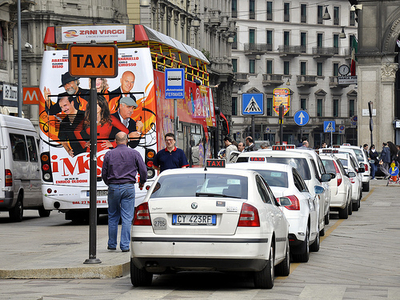 By far my favorite Italian cab driver story of my life in Italy so far (leaving room for many, many more) was my second taxi ride in Naples. At the time, it wasn’t as funny as it is now, but as with many situations like that it makes for a great story now that it’s safely in the past.
For some reason, when I climbed into this particular taxi, rather than giving the driver the street and address of my hotel, I blurted out a piazza that was nearby. This was before he said anything other than “Ciao,” so I’m not sure why I did it – but I’m glad I did. Because he started right in with the “you’re beautiful” comments. He said it so many times, in fact, that I lost count. That alone wouldn’t have been bad (or all that unusual for a taxi ride in Italy, frankly), but here’s a rundown of the rest of what made me less than thrilled that I was in his cab:

When I refused his (kind?) offer of a gratis tour of Naples that evening, he suggested the following night. When I said I was there on business and had work-related appointments both nights, he suggested during the day. I maintained that really, I was awfully booked during my trip. He insisted that I take his number so that I could call him should my schedule open up. (I actually took his number to make him stop pressing me on the issue, so if anyone’s looking for a taxi driver in Naples who loves American women and would be pretty eager to give out free city tours, lemme know.)
But perhaps the topper of the whole trip – and bear in mind, this was all in a less-than-ten-minute tax ride – was just before we arrived at the piazza where I was going to jump out and not look back, when he said, “Have you ever been courted by a Neapolitan man before?”
Now, I know the word “courted” is a perfectly polite and sweet word on its own, but after the barrage I’d just gotten from him, the question kind of put me over the edge. I replied, “No, my husband isn’t Neapolitan.” It may not surprise you to know that the inclusion of the word “husband” in my response did nothing to slow him down. He blew me a kiss as I stepped out of the taxi.
photos, from top to bottom, by: Julia Janßen, romephotoblog, Ambrosiana Pictures, [auro], Ambrosiana Pictures