Top 10 Things to Do in Naples 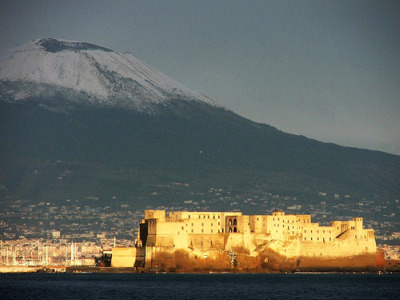 As I’ve said before, I never really expected to fall in love with Naples – but that’s what happened. I could have spent ages just wandering slowly around the historic alley ways in the historic center, and would someday love to know it so well as to have the cobblestones memorized. I’d like very much to know the guys at Pizzeria Di Matteo by name, and I wouldn’t mind picking up some of the Neapolitan dialect while I’m at it. But those are dreams for future trips.
Despite my admittedly narrow fascination with one tiny part of a vast and sprawling city, however, I can still deliver a list of my suggestions for the top 10 things to do in Naples. This is partly due to the fact that I think most visitors to Naples need not stray far from the old center, and partly due to the good advice of trusted Naples-loving friends.
I fully expect to feel the need to expand upon the 10 items featured here as I get to know Naples better, so I’m going to call this list “subject to change.” It’s a woman’s prerogative to change her mind, right?

Top 10 Things to Do in Naples (According to Jessica)

There are, obviously, many more things you could add to your to-do list in Naples – including three castles, an opera house, countless more churches, and several more museums. And I’m not even mentioning that big volcano looming over the city, either. If you thought Rome could occupy your itinerary for a month, the same can easily be said for Naples.
But don’t knock yourself out trying to do everything in one visit – you’ll get tired and cranky, which isn’t pleasant in general, and may mean you harbor bad feelings toward the city. It’s not Naples’ fault there’s so much to do there.
Instead, do what you can – from the top 10 list above, or from this list of things to do in Naples, or from any other list of sights in the city you choose – and plan on coming back someday. Naples has been here for a good long time, and she’ll wait for you to return. I promise.
>> Read more about what to do in Naples, some of the free and cheap things to do in Naples, and consider adding some of these weird Naples attractions to your itinerary, too.
photo credits: Naples & Vesuvius by clydeye, Di Matteo pizza by dawvon, Herculaneum by Rita Willaert, sfogliatella by LexnGer, Veiled Christ from Wikipedia, San Lorenzo underground by Martin Dixon, Procida by J.Salmoral, MADRE from official MADRE site – all others by Jessica Spiegel & may not be used without permission